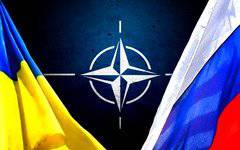 What happened in Kiev is not a revolution, but a war


The Verkhovna Rada of Ukraine has registered a draft law “On Amendments to Certain Laws of Ukraine (regarding ensuring and guaranteeing the national security of Ukraine)”. It implies the refusal of Ukraine from non-aligned status and proclaims the course towards the country's integration into the North Atlantic Alliance. Under the conditions of the new government, the prospects for the passage of this bill are considered by experts as exceptionally good.

Not so difficult to predict the reaction of Russia. At his recent press conference in Novo-Ogaryovo, the Russian president very clearly expressed his attitude towards the decisions taken by the new Ukrainian government. But one thing is not to recognize any decisions of the enemy “in perspective”, and another is not to recognize what is becoming a reality. There is no reason to doubt that Yatsenyuk and Turchinov will meet the troops of the North Atlantic Alliance with “bread and salt”.

KM.RU presented the vice-president of the Academy of Geopolitical Problems Konstantin Sokolov on the perspective of Ukraine’s entry into NATO KM.RU:

In Ukraine, there was and is taking place external intervention

“The decision of the Verkhovna Rada concerning Ukraine’s entry into NATO is an obvious continuation of the policy of those forces that have now triumphed there.” First of all, we must understand that in Ukraine there was and is a place for external intervention.

On the Maidan, foreign mercenaries acted openly. And what about the recognition of Victoria Nuland, that the US has invested 5 billion dollars in Ukrainian non-governmental organizations? That is, in fact, they were the ones who prepared this event, and I suspect that in reality they invested much more seriously. Yes, and many other facts clearly indicate that we are now faced with aggression, which is carried out in accordance with the US national security strategy adopted earlier in the United States, which implies the implementation of the theory of pre-emptive wars in practice.

What happened in Ukraine is not a revolution at all, but a war, the main feature of which is external intervention carried out on the basis of the American state strategy mentioned by me. Therefore, now, of course, when deputies vote clearly in conditions of open violence, in conditions of coercion, in the conditions of life threatening them and their families, it is clear that all their actions have no legitimacy, like the Verkhovna Rada itself. The impeachment procedure of the president was not, respectively, the transfer of power to the Parliament and specifically to Turchinov - the events in the legal sphere are void.

And, of course, such an alarming moment cannot but draw attention to itself: in general, the country's entry into NATO is a rather lengthy procedure, so why is this business becoming relevant now? Apparently, this is due to the fact that in the context of the outbreak of a civil war in Ukraine, Bandera must, by all means, legitimize external intervention by NATO. Thus, in the conditions of their illegitimacy, the Ukrainian state authorities can accept anything, and whatever they accept, it will be legally void.

On the other hand, now in order to prevent the bloodshed in Ukraine, it is necessary to act on the same technology that the West is operating in Ukraine now, openly sending security officials from private military companies and mercenaries. As evidenced by deputy Yevgeny Fedorov, mercenaries from Arab countries were operating in Ukraine. And all these things must be answered in accordance with the measure of threat, on the assumption that a blow to the Crimea is a blow, of course, to Russia, simply with some intermediate phase.

Now no diplomatic demarches, no economic, political measures will give any result. The West has set a goal: to crush Ukraine and launch a fire into the territory of Russia. We must understand this clearly and draw the right conclusions.

Ctrl Enter
Noticed oshЫbku Highlight text and press. Ctrl + Enter
We are
Interview of V. Putin to Channel One and the Associated Press AgencyWhat you didn't want to know about England
Military Reviewin Yandex News
Military Reviewin Google News
24 comments
Information
Dear reader, to leave comments on the publication, you must sign in.