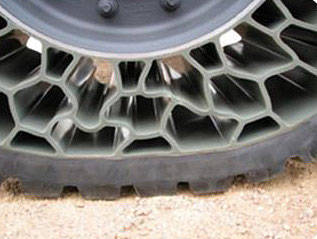 The use of high-quality rubber today is an integral part when creating a variety of vehicles, military equipment. Not only tires are made of rubber, which can be ordered from an online store www.autotoon.ru, but also various sealants, rugs, overlays on hand-rail and other devices. Tires made from high-strength rubber for military equipment possess important properties. Even after several bullet holes, for example, the armored personnel carrier can continue moving. This is extremely important in terms of combat or training operations.
Originally used exclusively natural rubber, derived from the resin rubber trees. Although this material in the modern sense could hardly be called rubber. The Europeans became acquainted with the hardened resin of rubber in the 18 century. For a long time the technical application of this unique material was not. But after the invention of the first cars, rubber tires became an integral part of the wheels of automotive vehicles. A weighty contribution here belongs to the person who became the founder of the vulcanization method. This is an American engineer Charles Goodyear (Goodyear). The name "vulcanization" and today many baffled, because it does not fit in with the process of obtaining rubber. In fact, Goodyear began to call the process that way because of the use of fire in it. The god of fire of the ancient Romans is Vulcan, hence the name of the process. When Goodyear was engaged in vulcanization, he added a substance such as sulfur to natural rubber. It was after vulcanization that rubber turned into real rubber - into the material that we used to call rubber today.
Over time, thanks to the development of the chemical industry, they learned how to create artificial rubber - rubber without using such a natural component as rubber. Instead of natural rubber, synthetic rubber is used. Today, artificial rubber is created at special enterprises that have one common name with derivatives from synthesis rubber.
In 1910, the Russian chemist Ivan Kondakov discovered a process by which rubber can be synthesized from dimethylbutadiene. By the way, Kondakov’s developments were more interested in Germany than in the Russian Empire. By the beginning of World War I, German industry was more actively engaged in the synthesis of rubber by the Kondakov method.
Ctrl Enter
Noticed oshЫbku Highlight text and press. Ctrl + Enter
We are
Ground robots. From drop systems to unmanned convoys (Part of 4)The most promising US military projects, the use of which is possible for peaceful purposes
Military Reviewin Yandex News
Military Reviewin Google News
Add a comment
Information
Dear reader, to leave comments on the publication, you must sign in.