Great checkerboard: the secret springs of the Ukrainian crisis 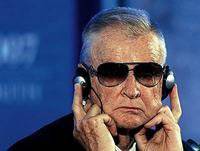 In fact, the West is now blaming Putin for not repeating the mistakes of Stalin 22 June 1941. And the Russian liberals, throwing mud at him because he “skipped the beginning of the war and did not listen to intelligence”, now “do not see” that Ukraine was preparing aggression against Russia. Putin was more perspicacious than Stalin, and he prevented the attack. Therefore, now the West is in shock, rage and impotent rage. Brzezin Zbigniewski, President of “The center of political forecasting and analysis”, tells Canadian journalist Ardzhil Turner about this.


- So, let's start with the obvious and answer the 3 question:

1. Did the West accidentally insist on the signing by Ukraine of an association agreement with the EU, which is extremely unfavorable for it, until the end of 2013?

2. Was it by chance that after the refusal of President Yanukovych to sign him, Euromaidan immediately began, which the West strongly supported and ensured its victory?

3. Did Putin accidentally turn to the Federation Council to allow the use of troops in Ukraine, the Crimea and Sevastopol announced joining Russia, and riots began in the South-East of Ukraine?

The answer to the first question. It is well known that state bodies in the process of preparing and making decisions are guided not only and not so much by media reports, but by reports of special services. So could they report to Vladimir Putin in the summer of 2013 on the future association of Ukraine with the EU? Of course, the fact that the association with the EU in the form in which it was prepared, leads Ukraine to a complete financial and economic collapse. What the Russian president said many times to the Ukrainian leadership and, as a result, convinced him.

Both the USA and the EU, the transition of Ukraine under their influence was extremely necessary, since the Western economy is in serious condition, and unemployment in many countries has reached unthinkable limits. The absorption of the Ukrainian market provided, though temporary, but still the growth of the Western economy.

To this, not least, military-political calculations were added, that is, the realization of the possibility of creating a military enclave in Ukraine, which in the near future can be used if not for direct aggression against Russia, then for creating a hotbed of tension near its borders.

Is there any doubt that Russian intelligence did not report this to Vladimir Putin? Of course no.

Let us turn to the answer to the second question. There is no doubt that the true inspirers and organizers of Euromaidan, including financial ones, were outside Ukraine. Euromaidan itself was accompanied by neo-Nazi groups, not only by fierce anti-Russian rhetoric, but also by threats of the physical destruction of Russians and Russian-speakers. Their leaders have repeatedly openly declared their plans to launch a terrorist war on the territory of Ukraine. It is impossible to believe that these appeals were not accompanied by real actions, especially since the whole world knows that the training of Western Ukrainian militants was carried out in the territories of Poland and the Baltic countries from 2006.

As events of recent days have shown, it was not difficult to intercept the telephone conversations of Undersecretary of State Victoria Nuland or Catherine Ashton, EU High Representative for Foreign Affairs, that is, it can be stated with a high degree of confidence that the process of preparing and probable use of Ukrainian militants became known to Russian intelligence .

Is there any doubt that Russian intelligence did not report this to Vladimir Putin? Of course no.

Thus, the President of Russia was put before the West by a choice: to remain further in the position of an outside observer, thereby endangering not only his country, but tens of millions of Russians in Ukraine, or to take timely and adequate measures.

And finally, the answer to the third question. It seems that the moment of truth for Putin came after the Ukrainian president Yanukovych could not cope with the aggressive actions of the so-called "protesters" on Euromaidan, who ruthlessly attacked unarmed policemen, throwing them with "Molotov cocktails."

The Kremlin’s concern increased even more when Euromaidan began to seize state institutions with the full connivance of the Ukrainian authorities. And, finally, concern grew into a full awareness of the real threat after aggressive nationalists seized tens of thousands of units. weapons and hundreds of thousands of ammunition units in Western Ukraine.

Is there any doubt that Russian intelligence did not report on the details and details of this to Vladimir Putin? Of course no.

And after that, Euromaidan won, the agreement of February from 21 was not respected by all who signed it, and people belonging to the same aggressive groups, who announced their misanthropic intentions towards the Russians, were appointed to government posts in Ukraine. At the same time, all protests of Russia were ignored.
At the same time, numerous robberies and killings of those who allowed themselves to show disagreement with the victory of Euromaidan continued. Massive violence threatened to spread rapidly to the South-East of Ukraine and to the Crimea. Threats began to come not only to Ukrainian citizens, but also to the leaders of the Russian regions, ordinary people in Russia.

The nationalists who came to power showed particular hatred towards the residents of Crimea. And they were not limited to simple words, but already began to penetrate into the Crimean cities. There was a real possibility of seizing arsenals and military units in the Crimea, just as it happened in Western Ukraine.

And at the same time, which came to power, the Ukrainian leadership, which is absolutely not legitimate from the point of view of international law, fully complied with the demands of the radicals who are planning to commit genocide against the Russians on the territory of Ukraine.
So what was Vladimir Putin supposed to do? He did what any responsible head of state would do in his place in conditions when the world community, on whose behalf only Western countries spoke, completely ignores the opinion of Russia, regarding which there is a clear threat to its own security.

Russia's immediate and timely actions turned out to be completely unexpected for the West, not only in a military-political sense, but also economically.

Militarily, NATO intelligence countries suffered a complete fiasco, which Senator John McCain spoke clearly about at the US Congress hearing: “There was a massive failure in the analysis of Putin’s motives!”

In the economy, Western countries also miscalculated: after blocking Ukrainian military facilities in Crimea 1 and 2 in March 2014, the Russian stock market simply collapsed in March 3, frightened by the sudden “war” ahead. The prices of Russian assets have fallen disastrously. Shares of all the largest Russian companies drastically fell in price. They bought a significant amount (in some cases up to 30%) of their own monopolies from foreign owners for American money, which began to sell them in a panic at a reduced cost, and thereby greatly strengthened their financial independence . That is, in fact, Russia seized huge assets from the pre-crisis Western economy.

Thus, the hysteria of the US and the EU is quite understandable. True, the steps that they are now taking, Russia practically does not threaten. Declared sanctions are ridiculous and, most likely, just hit by their initiators. Putin’s authority has increased dramatically in Russia itself. The Russians felt an external threat and, which is understandable, how it happened more than once in their stories, abruptly pull together.

As they say in England, “Curses like chickens come home to roost” (Do not dig another pit, you will enter it yourself).

There is no need to argue that Putin has already dealt with such a problem as the observance of human rights throughout the South-East of Ukraine. But with the support of the entire population of Russia, this task is quite feasible.