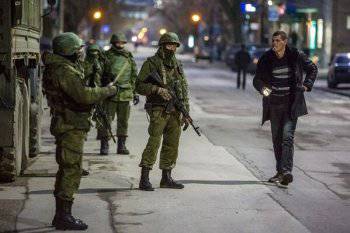 For many months I have been following the events in Ukraine and their interpretations. And I am surprised that so far no one has drawn an obvious parallel between these events and the events that occurred in the Serbian Kosovo.


It is known that Kosovo is the cradle of Serbian statehood. Similar place in stories Russia takes Kievan Rus. Not only that: initially, the entire territory of modern Ukraine from Chervona Rus in the west to the Don steppes in the east was Russian land, and the people who lived on it called themselves Russian people.

Both in Serbia and in Russia, artificially-formed innocent aliens appeared, who began to actively squeeze out the autochthonous peoples from their native land, at the same time appropriating to themselves the title of title nations. In the first case, the Kosovars, we have Ukrainians.

If everything is more or less clear with the Kosovar Muslims, then speaking of Ukrainians, one should understand that two different nations are called by this name alone.
There are Ukrainians - Russian people living in the southern Ukraine of the Russian Land. Naturally, having their own local cultural differences and dialect. Just like the Pomors, the Cossacks, the Siberians, etc. In all cases of the fateful choice, they remained true to the precepts of their ancestors and did not break their blood ties with Russia.

And there are Ukrainians - a product of the Austro-Hungarian laboratory, created by the Vatican technologies on the land of former Chervona Rus. They were deduced as a people, special from the Russian, as opposed to the Russian people and the main distinguishing feature that they cultivated was blind hatred of everything Russian.

The first thing they did to reformat their consciousness was that they changed the Russian Orthodox Christian church to a Catholic (Uniate) church, which is also formally called Christian, but in fact it is not. Words may be the most beautiful, but “by their deeds you will recognize them.” And the cases of criminal Catholics have done a lot, spilling oceans of tears and blood. To disassemble them is extremely heavy labor. I want to draw attention only to one, but fundamental, crime of the Roman curia against Christianity: the sale of indulgences. With this act, the Latins showed that, in fact, the spiritual perfection of man according to the commandments given by Jesus Christ is nothing compared with material wealth. That is, they actually recognized the sale of indulgences as their supreme god, not Christ, but the Golden Calf. Therefore, in fact, Catholicism is not Christian, and even not pseudo-Christian, namely, anti-Christian religion. What, in fact, explains his thousand-year-old hatred of Orthodoxy and all its wars against Christian Russia-Russia.

Therefore, when Catholics in the captured Russian lands changed the church, in fact they changed the people who lived there, the god. So the inhabitants of Western Russia were forced to live not in Christ and act against God, and therefore against Russia, which preserved loyalty to Him.

Through the centuries, a nation of obedient and faithful slaves was formed from the enslaved population through the centuries. Any of the most criminal means was used, including Talerhof and Terezin. And, unfortunately, in a number of western regions they managed to do it. The Soviet period turned out to be too short for Westerners, so that the consciousness of the people would be cleared and restored.

After the destruction of the Soviet Union in Ukraine, a lot of work was done to transfer all power in the country to this particular, small, but dog-like part of the population loyal to the Western masters. (It was a shame to watch on television how obediently and obsequiously they covered with their bodies a visiting Western politician.)

To suppress the bulk of the Ukrainian people, including it was done so that the Ukrainian language, in which the people spoke, for its very insignificant difference from Russian was condemned by the contemptuous definition of “surzhik”. And in exchange, right on the move, in the eyes of the current generation, a new language began to be invented, the main purpose of which was the maximum difference and opposition to the Russian language.

So, assessing the current situation in Ukraine, we can rightly say that in fact there are two peoples under one name. At the same time, one of them - a small one, which is a parasite in relation to a large one, illegally seized power in the country. In fact, it occupied and is in the country internal occupier. This is vividly demonstrated by one of the famous representatives of the “small nation” - Sashko Bilyi, whose adventures popularize television and the Internet.

Therefore, we need to do everything to open our eyes to the true state of affairs of both the real Ukrainian people and the foreign public.

Because it is not only the statement of Merkel about Putin’s inadequacy that stuns me, although she is inadequately assessing the situation with her accomplices.

But it also puzzles me that people who have fallen under the rhetoric of the Zapadena orcs even in the Crimea are beginning to shout: "Suitcase - Station - Russia." And no one puts them in their place. We have every right to demand from them: “A suitcase - a train station - a test tube” (since at the moment I don’t know exactly where the test tube was located in which these orcs were taken: in the Vatican, Krakow or elsewhere).

Once again I draw attention to the fact that all the land of present-day Ukraine is originally Russian Land. And only the Russian people have the natural right to live on it. Which, having their regional cultural and linguistic peculiarities, living in Ukraine, naturally, should be called Ukrainians. According to the rules of the Russian language.

Ctrl Enter
Noticed oshЫbku Highlight text and press. Ctrl + Enter
We are
What you didn't want to know about EnglandOleg Valetsky about the wars in the Balkans, their causes and Russian volunteers
Military Reviewin Yandex News
Military Reviewin Google News
13 comments
Information
Dear reader, to leave comments on the publication, you must sign in.