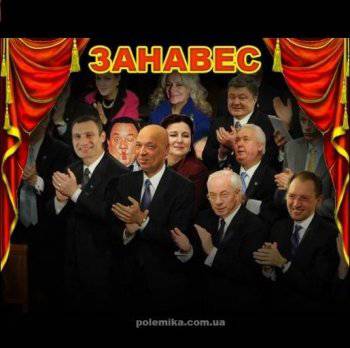 In Ukraine, they continue to be measured by legitimacy. The decision of the Supreme Council of the Autonomous Republic of Crimea to hold a referendum in autonomy is illegal, said Justice Minister Pavel Petrenko. "The issue of a referendum is illegal, since the issues of changing the status of Crimea are not subject to consideration in local referendums - this is a question of a national referendum", - announced the man who was appointed to the post by the decision of the Verkhovna Rada under the leadership of the speaker, whose position at the post many consider illegitimate.


In Ukraine, in general, is full of people who consider the new Cabinet of Ministers to be illegal, because it is appointed by usurpers of power. And these people in different regions of the country insist that the illegitimate Kyiv authorities have no moral or formal right to evaluate anyone’s legitimacy. For example, Rustam Temirgaliyev, First Deputy Chairman of the Council of Ministers of the ARC, contrary to the estimates of the Minister of Justice, is confident that the decision of the Supreme Council of the ARC to join Russia as a subject of the federation is absolutely legitimate. And it motivates this by the fact that an anti-constitutional coup was committed in Kiev to seize power by illegal armed groups. Therefore, the Crimean official explains, the only authorized autonomy body, the Crimean parliament, for which all citizens of Crimea voted, took full responsibility for the situation in Crimea. And now Crimeans are confident that they can independently determine their future. Is there a logical error somewhere?

When the dominoes fall, it is impossible to count on the fact that in the middle of the chain several dominoes will remain standing in their tracks. If someone starts capturing adminzdaniya and led deputies under escort vote in parliament, and in the meantime sets fire to their party office and kills people there, it is difficult to convince viewers that the thriller should suddenly go into vaudeville. That the audience, finally realizing themselves citizens with their rights, will not copy the train of thought and actions of those who rebelled first.

And if you demand from the 46-million population of Ukraine that it take for granted the forceful seizure of power, you must of necessity be prepared for the fact that some people also want to act in the same way.

With what eyes the new government is charging regional protest leaders with unconstitutional actions, I don’t know. I am sure that the eyes are quite tin. But, one way or another, the charges are pouring. In Donetsk, Pavel Gubarev was arrested, whom the Pitmen called the people's governor. It is said that he was taken to Kiev, where he would be charged with trying to seize power, with separatism and other anti-constitutional actions. Presumably, the courts, which suddenly, all suddenly, became fair, and, characteristically, completely independent, will take fair decisions according to the version of the Right Sector and the new government as a whole.

The year of the former opposition revolted Ukraine, there were calls at rallies for an armed coup, forcible overthrow of power and even physical violence against the head of state, but the bloody malicious regime of Yanukovych did not touch a single orator, not a single social activist, not a single quasi-journalist, who spent months propagandising. States. This did not cause the slightest embarrassment to the patriots, who today are in chorus about the interference of another state in our affairs.

Freedom of speech was such that tyrsa flew. They wrote, shot, commented, called, denounced from the free. Today, a fresh democratic government is cleansing the information space, staring intently at cable operators. And they read in these eyes something so unequivocal, something so definite that, contrary to the interests of their business and losing subscribers, they press the buttons off.

But back to the referendum. Crimeans wanted to take advantage of the great good that European democratic standards guarantee them. They wanted to know the opinion and the will of the people and according to this opinion and the will to act. Yes, we may not like it and even disappoint it, but vox populi vox Dei.

Tymoshenko also has something to say on this. This high-heeled walking encyclopedia commented on everything it reached, and it reached everything. In her opinion, the results of the referendum should be recognized as insignificant, because it will be held at gunpoint. Yulia Vladimirovna, released outside of any judicial procedure, suddenly became concerned with the procedure, as if she had not been personally released from the prison at gunpoint, under bottles of molotovs, under targeted fire of unknown snipers.

By the way, about snipers. Today, the entire Estonian government resigned. The reason is the content of the telephone conversation between high Estonian official Paet and notorious baroness Ashton, overheard by the secret services. The whole country is discussing this sensational, terrible, breaking the whole Maidan myth historyand only the head of AP Pashinsky and his comrades is silent. He, caught up with a sniper rifle, was placed on the highest public office. No one, including the most inadequate Ukrainian journalists in the world, was embarrassed by the fact that the case was not investigated. And is it open at all?

The naive thought that the bomb, which an Estonian accidentally blew up, would sweep away the remnants of naivety even among the hottest maydanshchikov, but - no. Discussions on social networks and forums clearly show that nothing can shake the myth. They still say today — even if we knew today how the Maidan would end, we would still have entered it. He, who took hundreds of lives, ended (interim results) with the reign of the same old deribanshchikov, oligarchic feudalism, increased inter-regional hostility, the appearance of the most odious grantoedov, a series of scandals with beatings, murders, robberies, and now with snipers, incredibly brutal cynicism killing maydanschikov under the lens of the camera next to it.

And again about legitimacy. The Prosecutor General's Office of Ukraine opened two criminal proceedings against the ousted President of Ukraine Viktor Yanukovych for attempting to seize state power. He is charged with actions aimed at changing or overthrowing the constitutional order or seizing state power.

President Yanukovych is the legitimate head of state. Those who even compare the multiplication table with the Americans may ask the opinion of the Grand Master Obama on this matter. Our president, whatever he was, but elected by democratic elections, was removed from office without any legal procedure, and - voila - now it turns out that this citizen Yanukovych publicly called for the seizure of state power in Ukraine.

The threshold of non-acceptance of schizophrenic reasoning among citizens has increased so much that no information explodes minds anymore. Many have managed to convince themselves with a light movement of a flexible mind that one can also quite properly shave oneself with the left foot and wonder - what is that? Normul is all.

Residents of the South-East of Ukraine will be able to achieve the fulfillment of their basic requirements by peaceful means. This statement was made by MP Igor Markov at a rally near the Odessa regional administration. According to him, “no force actions, no seizure of buildings should be allowed”. He stressed that all those who call for the seizure of administrative buildings are provocateurs.

I do not remember that something like that Igor shouted to his supporters, who practically took the courthouse building by storm and blocked the judge who was considering his case for several hours in the office. Due to this, the disgraced former colleague of the Regions, a note-taking pro-Russian leader, was at large. Maybe Yulia Vladimirovna is right, and at the barrels of machine guns people’s third eye and second mouth open?

While the legitimate, half-legitimate and usurpers are discussing their criminal perspectives, the Ukrainian economy is marching in the designated direction. On this path, they suddenly wanted to help her. Europe promises to allocate 11 billion euros over several years. On the studs enough.

But this money is strictly under the control of the IMF. Today discussed the terms of surrender. Pensioners, already holding virtual guides European pensions in virtual hands, are now crying. Yes that pensioners? Everyone is crying, who at school has learned to count. Not crying only presidential candidate Klitschko. He suddenly emerged from the warm ocean of his dreams of the scepter and the power, announced that we should refuse the Russian loan. Vitali, nobody is going anywhere. Evil Russian sponsors announced a couple of weeks ago that it was better not to wait for the second tranche. They, you see, contrary to the world community, do not consider the new government to be legitimate and will not give any more money. In addition, Putin explained, foreign partners persuade him not to give Ukraine loans so that the IMF can oversee our reforms in the right direction. So the speed of movement of the pulses along the nerve fibers again played a bad joke with Klitschko.

Ukraine is considering options for buying gas in Europe. This is honest. A significant part of our citizens have generally declared a boycott of Russian goods, so it is quite logical to buy fuel in Europe. The main thing is to answer the question, whose gas specifically will we buy in Europe. However, such details do not bother anyone.

Yatsenyuk again assured foreign curators that the most urgent goal of the authorities is to sign an association with the EU. Europeans agree and assure that Turchinov is legitimate for all 200%, so why not sign it? Chubarov called to the country of the legendary UN peacekeepers. Yabedi and petitions around the world are flying like leaves in October. The world habitat reacts. The US State Department today imposed a ban on the issuance of visas to Russian and Ukrainian officials and those responsible or involved in threats to the sovereignty and territorial integrity of Ukraine. White House spokesman Jay Carney said in a statement that the move was a response to "Russia's permanent violation of the sovereignty and territorial integrity of Ukraine - actions that constitute a threat to peace and security and a violation of international law". International law and its guaranteeing to patronized nations is a strong point of Americans.

Russian did not stay with the answer. The State Duma of Russia was offered to introduce economic sanctions against the Ukrainian oligarchs, which contributed to the violent overthrow of the government. A system check has begun in the Russian branch of PrivatBank ...

Yury Lutsenko said that the police should be abolished, because she was protecting the illegal corruption deals of the gang in power. Even so - "stood on the nix". To pardon - pardon, but in one instant you will not forget the hairy, you will not drink ... Yury Vitalyevich knows firsthand what he is talking about, tea, he did not serve as a district officer.

On the other hand, there will be no corruption in the country now, so there will be nothing to protect. To the cause of the fight against corruption, an Mezhigorsk warrior has been set up; she has torn up the mouth of the golden toilet, Tatyana Chornovol. That will be you, bandyugan-deribanschiki. True, evil tongues assert that old, furrowing-corrupting corrupt officials are again massively leaking into power, but Tanya will find justice on them.

And about the beautiful. They say that tireless fighters for the best against the worst have again found the most important thing for themselves. The transition of the Ukrainian language from Cyrillic to Latin. This idea has long been discussed in the circles of patriots - how else can the Russian language die if you do not translate Ukrainian into other letters? Yes, the case is stressful, multi-ton complexity, comic value, but it’s an emergency! We will not stand up for the price ...