Vladimir Ogryzko and his plans to return nuclear weapons to Ukraine 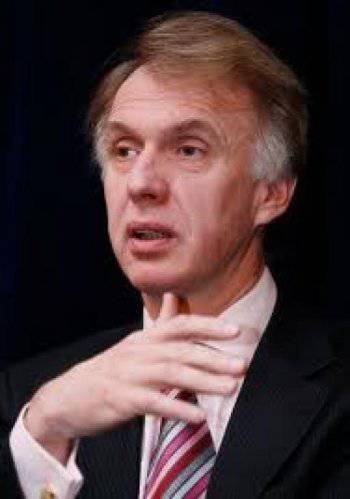 Regarding the former Minister of Foreign Affairs of Ukraine Ogryzko I have long had the impression of lack of professionalism and inadequacy. One история with Romania says a lot. Then, under the guidance of Vladimir Ogryzko, Ukraine lost 80% of the oil and gas bearing shelf of the Black Sea, which Romania sued. It was the most solid diplomatic defeat of Ukraine in all recent years. Moreover, the defeat, which the country went consciously, trying to please the EU and demonstrate its kneeling before the European international court.


Confirmation of their classical parameters of the nationalist politician Ohryzko gives out, as they say - on a mountain, regularly, and with unique perseverance.

"Vzhe wrote about the need for the improvement of the crock on the basis of the agreement on the Treaty on nuclear disruption of the nuclear industry. We have here for all that is necessary. Potrіbna liche political will. (Already wrote about the need to take steps to withdraw from the Treaty on the Non-Proliferation of Nuclear weapons and begin the process of its creation. We have all the necessary opportunities for this. Only political will is needed)

Ale, obviously, will be lacking. We are going to need to turn to those about the missiles of a little and that middle distance, radius of the next few, enough to get our “guarantor” - the aggressor of the enemies, about it. So, itself, as an example of a nuclear warfare, you can be satisfied with the quality of production. But again, - the power of the political will ", (But it is obvious that these steps will not be enough. We need to immediately return to the topic of short-range and medium-range missiles, the range of which will be completely sufficient for our “guarantor” aggressor to understand what is being said. Also, like in the case of nuclear weapons, you can quickly get these products. Again, this is a question of political will ”, our wonderful diplomat writes in his blog.

In this context, we can call it by this word, only in the definition - “double folded document”, because real and even former diplomats speak not such delusional language in such a terrible situation. Instead of looking for ways to solve the problem in which they themselves had driven the country, all Ukrainian conscious politicians continue to take steps leading to the final split and destruction of their beloved state by us and us. And if they carry out any measures to roll back, it makes a ridiculous impression. What kind of nuclear status can we talk about now? What rockets? For sure, pan ogryzko lost the ability to think for fear.

It would be interesting to know the reaction Merkel on such a statement. Or Obama. I fully admit that such gentlemen as McCain are happy - a downed Vietnamese pilot, Polish leaders (these guys are always good when Ukraine acts like a hutsul with a hangover) or Baltic state ladies and men, these titans of the Northern Hemisphere.

"The alogical nature of imperial thinking lies in the fact that it does not take into account the realities. Willingness is taken into account, and not what happens in reality. Already today, Crimeans say to the camera that before the arrival of the Russian special forces there was order, and now the mess has begun. And this is the answer to the Kremlin "strategists" who plan their operations. If people do not want to be slaves, they will not become them, but this in Moscow cannot be understood at all, "- these are his words yesterday in an interview with Gordon.ya.


The illogical nature of the nationalist's thinking lies in the inability to open eyes wide and see the real picture. This is natural, because such a person brushes aside alternative sources of information, sees around him what fits into his matrix and does not want to hear anything else.

And what can we read today in absolutely all the leading Ukrainian media? Here are just the headlines about Crimea, completely identical from the Censor and the Expresso to the UE and the Desert.

Compared to the "independent" Ukrainian media community, the matrix is ​​not only resting, but also nervously smoking in the corner.

The puppet Council of Crimea appointed a referendum on joining the Russian Federation on March 16. The puppet Council of Crimea decided not to hesitate to join Russia. Puppets of the Kremlin are going to translate the Crimea into rubles. Puppets of the Kremlin have already called the Ukrainian troops occupiers, and the Crimea-Russia.

I do not distort anything - you can easily verify this yourself. This is what we call honest media and nothing else. Vladimir Ogryzko clearly reads them.

Well, what he thinks about the Crimea Arseny Yatsenyuk, our prime minister?

Naturally, the illegitimately appointed prime minister does not recognize either the Crimean government or the referendum on its territorial affiliation scheduled for March 16. I think that Arseny Petrovich is expecting another big disappointment in his life soon.

But in the 2007 year, when Mr. Yatsenyuk was the Minister of Foreign Affairs, he was ready to recognize the sovereignty of Kosovo, which had been torn off from Serbia in general without complying with any Serbian or international laws.

"If the sovereign status of the province of Kosovo is supported by the UN Security Council resolution, Ukraine will immediately also support this resolution and fully implement it ", - Arseny Petrovich assured the world community of his loyalty, who visited in July 2007 of the year the self-segregated, indivisible part of the Constitution of Serbia.

Let's hear what he said Владимир Путин in the same year 2007 about Kosovo:

"Once again I want to emphasize, we believe that support for the unilateral declaration of independence of Kosovo is immoral and illegal. I do not want to say, so as not to offend anyone, but 40 has existed in fact for an independent republic of Northern Cyprus for years. Why don't you recognize her? Are you not ashamed at all, by Europeans, with such double standards, to approach the solution of the same issues in different regions of the world? We are always told: in Kosovo - a special case. Lies are everything, there is no special case there, and everyone understands this perfectly well. It is necessary to develop a common principle for solving these issues. We do not drive the situation into a dead end, we invite our partners to develop common rules of conduct. "

You worked? Of course not. For each situation, the Free World has a different approach. For the tyrant of Bahrain - one, for the president of Syria - the other. It all depends on loyalty and friendly relations, which are in complete subordination to the policies of the US State Department.

Now, Ukraine’s ostrich policy has driven the country into a dead end. The new-old Ukrainian government consists of those politicians who all years of independence did not have their own opinion, ran errands in various UN missions, were ready to stick their heads in any loop, just to earn praise from some European politician or another US Secretary of State or a messenger. And now you have driven your own country into a moral, international and economic impasse, from which there is no way out.

And all this has always been seen by citizens of Ukraine, including Crimeans ...