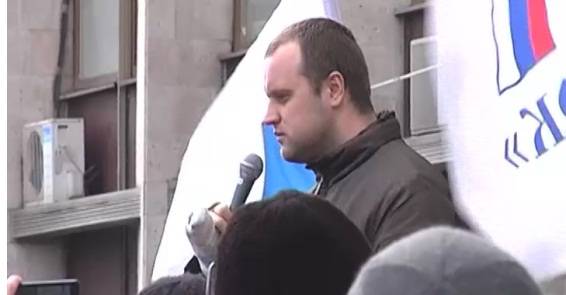 In Donetsk, where from the beginning of the week the regional administration building several times passed from the opponents of the new government to the supporters and back - today a kind of balance has developed in favor of the oligarch Sergey Taruta from Kiev appointed by him. His opponent, Pavel Gubarev, who is called the "people's governor", was detained by security forces, reportedly in a separatism case.

The conspiratorial apartment where Pavel Gubarev lived in the last days is located in the very center of Donetsk. This is University Street 69. Just in this apartment his detention took place. Immediately after that, employees of the Security Service of Ukraine began to work inside.

Everything that happened was like a well-planned operation. They acted quickly and, apparently, on someone's tip. Several people in civilian clothes with the support of the fighters of one of the Ukrainian special forces broke into the apartment. One of them presented a certificate of an employee of the Ukrainian National Security Service. Nobody explained the reasons for the detention to Pavel Gubarev.

“He was tied up and handcuffed. I did not see, but I heard the sounds of a struggle from the room where Pavel was. Special forces came in and took him outside,” says eyewitness Andrei Lunev.

After Pavel Gubarev was taken away in an unknown direction, a search began in the apartment. Film crews in the apartment now do not miss. Judging by what the detainee’s lawyer, Elena Pryadko, says, both the arrest itself and the subsequent search were conducted in violation of procedural rules.
“The search is conducted, I cannot comment on the order in which. But the lawyer is not there. And what will be fixed there? There are no persons with legal and legal education there,” the lawyer says.

For the first time, the law enforcement agencies reported about the arrest of the people's governor Pavel Gubarev, who was elected at the Donetsk Chamber of Commerce, in the morning, after the security forces cleared the regional administration building. Then this information was not confirmed. In order to refute the rumors, Pavel Gubarev himself went out to the journalists.

"At first they threatened and tried to bribe me personally, threatened members of my family, threatened me with reprisals, automatic weapon brought to the meeting and intimidated. Now the authorities have begun open repression against supporters of our movement, "said the people's governor of the Donetsk region.

People took to the streets in protest against the appointment of oligarch Sergei Taruta from Kiev to head the region.

“Donbass’s opinion is that some oligarchs in Kiev and in Western Ukraine did not share the“ grandmothers ”and money with the oligarchs of our side. And on the shoulders of the fascists they push people with their heads together. They just stupidly divide money. They put all the billionaires who had stolen money from us, at ordinary people ", - considers Vlada Tishchenko.

"People have hopelessness. I believe that when there is no power in the country that could save, support, help out its people and really work for the people, this power does not exist, then what does a person have? He goes to a neighbor and says:" Help, save us, because who else will save us? "- says Valery Shuppach.

“The police was demoralized. And who gives the spirit? Commander. And the commander could not motivate and lead people,” said Sergei Taruta.

The personnel policy of the new governor appointed from Kiev has already brought its first results. During the clashes, law enforcement officers detained more than 70 people. Now they will be accountable before the law, as stated in the reports, "for the seizure of administrative buildings." By the way, in Kiev such formulations were not applied to participants of street collisions even once.

“The police really don’t let people through. They’re just carrying out explanatory work among people. If they become participants in the rally, this rally is unaccompanied. Administrative responsibility is provided for this. If they take part in the so-called administration storms, this is criminal responsibility.” , - explains Maxim Kirindyasov, Head of the Donetsk State Department of the Ministry of Internal Affairs.

Lawyers for people detained in street clashes have a different opinion. They consider that their clients did not violate the law.

“We have double standards for some reason now. If we look at how Gubarev and his supporters acted, we will not see actions that would be similar to actions on Maidan. People who acted by completely different methods detain them,” says lawyer Pavel Gubareva Elena Pryadko.

People who are enrolled in the people's militia say that they are receiving threats. First of all, it concerns youth. Students under threat of deduction from universities are prohibited from participating in street actions of disobedience and expressing their opinions.

"Look around, you see here only representatives of more or less adults or seniors, or men, or women. And why are there no young people? In high schools they practically do not allow and do not pay attention to freedom of thought. And today I was in the regional department where I was given a brief remark about the fact that the rector of my university will be dissatisfied with seeing his students at a rally against the authorities. Our students of the National University should not go out, ”said rally participant Dmitry Maksimenko.

“I came here at the call of my heart. You understand? The new government does not recognize the people. The Ukrainian mass media are throwing mud at the population of Donbass, there is absolutely distorted, untrue information. By the way, one of our officials even said that it’s impossible to pour such mud “There must be at least some part of objective information; we cannot ignore the demands and aspirations, the desire of half the population of our country,” said Alexander Kurenkov.

The building of the regional council passed from hand to hand three times already. Only on the eve, the security forces first beat off him from the members of the “Donbass resistance”, and then the militia again took the premises by storm. Before that, people collected signatures under a letter asking the Russian authorities to intervene in the situation and protect city residents from the mayhem of Ukrainian nationalists. In order to prevent a new assault, now reinforced police cordons and special equipment are displayed outside the regional administration building.

Ctrl Enter
Noticed oshЫbku Highlight text and press. Ctrl + Enter
We are
Reports from the militia of New Russia for 27-28 September 2014 of the yearResults of anti-terrorist work on Dagestan in April 2014
Military Reviewin Yandex News
Military Reviewin Google News
73 comments
Information
Dear reader, to leave comments on the publication, you must sign in.