March 7 2014
7
Sergey Lazo, this name was familiar to many residents of the USSR. History In those days, the heroic life and death of this person was taught in schools and universities, performances were staged about his life, poems and songs were written about him, and directors made films about him. Accordingly, many streets and settlements of the Soviet Union bore his name. So who was this man who was born 120 years ago 7 March 1894 of the year and left behind such a visible trace with the naked eye?


Sergey Lazo is a Bolshevik, a revolutionary and a participant in the Civil War, who proved himself in revolutionary activities in the Far East of our country. Like many heroes of the Soviet era, it is almost completely forgotten by contemporaries. The country that made him a hero is no longer on the map. Today, it would be possible to talk about him as about a person loosening “spiritual braces”. He did this, like the other revolutionaries of that period, quite successfully, the Soviet power on land 1 / 6 won and for a long time became a kind of world counterweight, the second geopolitical center of the whole world. Sergey Lazo successfully approached the role of the hero of the revolution, as there were legends about his terrible death in the 1920-s. New Soviet authorities needed heroes. Sergey Lazo, who was killed for his ideals, was one of many who perfectly suited this role.

Sergey Georgievich Lazo was born on February 23 (March 7 in a new style) 1894 of the year in the village of Pyatra, located in the Orhei district of the Bessarabian province (today the territory of Moldova). He came from a Moldavian noble family, respectively, and was himself a nobleman. The origin did not prevent him from linking his fate with the revolutionary movement. While still a student at Russian higher educational institutions, he began to pay a lot of attention to leftist views and trends. 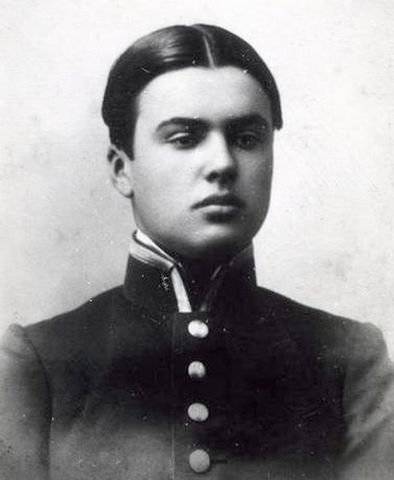 Sergey Lazo received a good education. He studied at the St. Petersburg Institute of Technology, and then at the Physics Department of the Imperial Moscow University (now MSU). Already during his studies, he begins to take part in the activities of student revolutionary circles. World War I found Lazo studying and abruptly turned his life around. In July, 1916, Sergei Lazo was mobilized into the army. He managed to graduate from the Alekseevsky Infantry School located in Moscow, after which he was promoted to officer of the Russian army. Originally received the title of ensign, later a second lieutenant. In December, 1916, Sergey Lazo was sent to Siberia near Krasnoyarsk at the location of the 15 Siberian reserve rifle regiment.

In Krasnoyarsk, Lazo became close to the political exiles in the city and, with them, began propaganda among the soldiers of the regiment against the ongoing imperialist war. Here in Krasnoyarsk in 1917, he joined the Social Revolutionary Party (SR). Contemporaries said that this decision was not accidental. Since childhood, Sergei Lazo has been distinguished by maximalism of judgment and an increased sense of justice - to romanticism. Later, in the spring of 1918, Lazo will quit the Socialist-Revolutionary Party, joining the Bolsheviks.

During the February Revolution, 1917, Lazo, along with the soldiers of the 15 reserve regiment who submitted to him, took part in the arrest of the governor of the Yenisei province, Ya. G. Golobov, as well as other local top officials. In the 23 age, Lazo became a member of the Council of Workers, Soldiers and Cossack Deputies of Krasnoyarsk. In June of the same year, the Krasnoyarsk Council sent a young revolutionary to Petrograd, where the First All-Russian Congress of Workers' and Soldiers' Deputies' Councils was to be held. It was at the congress in Petrograd that Lazo saw Lenin for the first time in his life, while in-person familiarity with the leader of the world proletariat made a very strong impression on the young man. He liked both the speech delivered by Lenin and the radicalism of his judgments. Most likely, it also affected the fact that in the spring of 1918, he joined the Bolsheviks.

Returning from Petrograd to Krasnoyarsk, Lazo managed to organize and lead the Red Guard detachment. In October, 1917, when another revolution took place in Petrograd, this squad worked according to the “old scheme”. Fighters of the Lazo squad had arrested high-ranking officials, now interim government. Lazo's soldiers occupied most of the state institutions, banks, and the treasury. The garrison of the city was completely in the hands of Sergey Lazo. 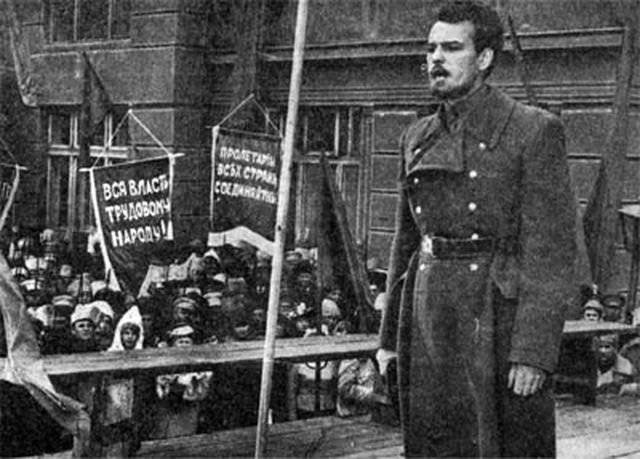 In Krasnoyarsk, everything went relatively peacefully. But by November the situation began to change. On November 1, the cadets of the Omsk school of ensigns, who supported the provisional government, spoke. To suppress these forces, the Lazo detachments were engaged, the Red Guards coped with the task. However, in December 1917, a new uprising of officers, junkers, Cossacks and students broke out in Irkutsk. The Red Guard detachments were urgently sent to the city. One of these detachments was commanded by Lazo.

26 December 1917, the most serious battles on the streets of Irkutsk. Lazo led a consolidated detachment of Red Guards to storm the Tikhvin Church. After many hours of battle, the church managed to be captured, then the detachment advanced along Amurskaya Street, trying to get through to the local White House (the house of the governor). However, in the evening of the same day, the cadets with a counterattack were able to regain control of Irkutsk, Lazo and part of his fighters were captured. On December 29, the parties declared a temporary truce, while in the following days the Reds were able to seize power in Irkutsk, which may have saved Lazo’s life. After the liberation, Sergey Lazo was appointed military commander of Irkutsk and the head of his garrison.

The fighting in Irkutsk became a real baptism for Lazo. Already during these battles, he showed quite outstanding abilities in military affairs, quickness of orientation, personal bravery. He personally taught the Red Guard tactics of street fighting, as well as throwing hand grenades, Lazo himself knew how to do it perfectly. Very soon, the former warrant officer of the Russian army will lead the Trans-Baikal Front. Such a dizzying military career can be made only during the revolution.

He led the actions of the Trans-Baikal Front from the end of February to August 28 1918. On this day, at a conference of party and Soviet workers, it was decided to switch to partisan forms of warfare. Under his command, the front was able to achieve a number of successes, in particular, he managed to push parts of the famous ataman Semenov into the territory of Manchuria. Another success was his agreement with the Chinese authorities on an armistice. In particular, China has pledged not to miss parts of Ataman Semenov in Transbaikalia until 5 in April of 1918. 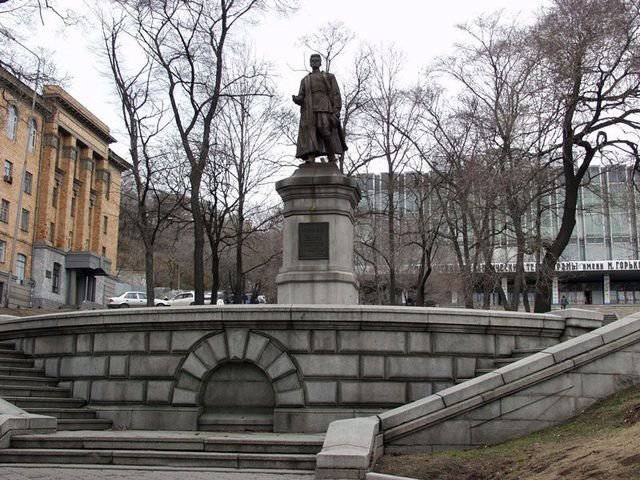 Monument Lazo in Vladivostok
In general, despite the local successes in the fight against Semyonov’s forces, the situation for the Trans-Baikal Front passed into a critical stage after the White Czechs who had approached from the Urals and Siberia. The young parts of the Red Army, whose number was about 9 thousand people, were squeezed between the Czechoslovak Corps and parts of Ataman Semenov. Under these conditions, the decision to move to guerrilla activity was the only correct one.

After retiring to the Underground and going beyond the partisan activity, Lazo again appeared to be in his element. At first, his activity was directed against the Provisional Siberian Government, which seized power in the east of the country, and then against Admiral Kolchak, who declared himself the Supreme Ruler of Russia. Since the autumn of 1918, Lazo has been a member of the underground Far Eastern Regional Committee of the RCP (B.) In Vladivostok. In the spring of 1919, he commanded various partisan detachments that operated on the territory of Primorye. Since December, 1919 has headed the Military Revolutionary Headquarters for the preparation of the uprising in Primorye. It should be noted that the actions of the red partisans in the rear of Kolchak's troops distracted the additional forces of the whites who did not engage them on the Ural and Siberian fronts, undermining their support and the situation in the rear.

However, it could not carry the romance from the revolution endlessly. In 1920, he made a mistake that cost him his life. At the beginning of 1920, when information appeared that the Kolchak government fell in Siberia, the Bolsheviks in Vladivostok began to prepare a revolt, intending to overthrow Kolchak's governor in the city of General Rozanov. Lazo himself insisted on such a development of events. At the same time, Vladivostok was then filled with Japanese troops.

In spite of this, 31 in January 1920, Lazo conducts a coup in Vladivostok, taking control of the railway station, mail and telegraph. Lieutenant-General Rozanov fled to Japan on a steamer. At the same time, the interventionists, of which there were more than 20 thousand in the city, remained indifferent observers. Despite the fact that there were no more than a few thousand reds in the city, Lazo declared Soviet power in the city. 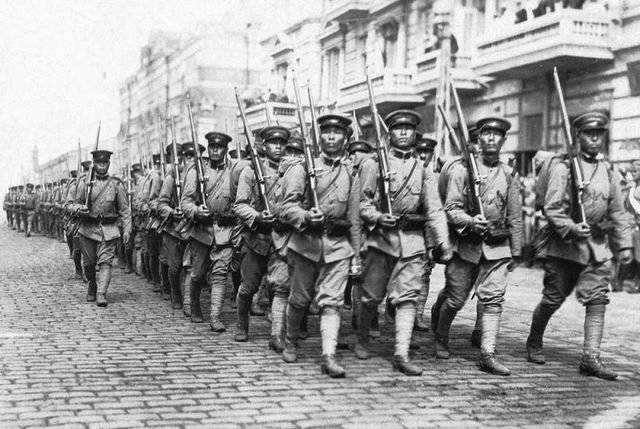 The Japanese for some time did not react to what is happening. But after the incident in Nikolaevsk, the Japanese garrison in the city, as well as peaceful Japanese residents and “counterrevolutionary” elements among Russian citizens were destroyed by detachments of red anarchists under the command of Yakov Tryapitsin and Nina Lebedeva, and the city was almost completely burned down - the Japanese military began to act. According to estimates, the Chinese population in the city and foreign citizens in the city killed about 4 thousand people. The Nicholas incident was the trigger for the Japanese military interventionists, who promptly responded to these events and began a full-scale fight with the red partisan movement in the Far East. On the night of 4 on 5, April Lazo was arrested in Vladivostok.

In late May, 1920, Lazo and his comrades were taken out of Vladivostok by the Japanese military, who handed them over to the Cossacks — the White Guards. According to the version prevalent in the USSR, first Sergei Lazo was tortured, and then he was burned alive in a furnace of a locomotive, and his comrades were first shot and then burned in locomotive furnaces in bags. Later, there was even a witness, a nameless machinist, who saw how at the Ussuri railway station the Japanese military handed over to the Cossacks from the Bochkarev 3 bag, in which there were 3 people. The Cossacks tried to push people into the locomotive firebox, but they resisted, after which they were shot and stuck inside already dead. However, even before the events described in April 1920, the Japanese newspaper Japan Chronicle reported that a revolutionary Sergei Lazo was shot in Vladivostok, after which his body was burned.

Now, many admit that the version with the steam furnace is nothing more than a legend. However, this legend turned out to be tenacious and perfectly suited for the formation of the heroic image of a revolutionary fighter, actively used for propaganda purposes.