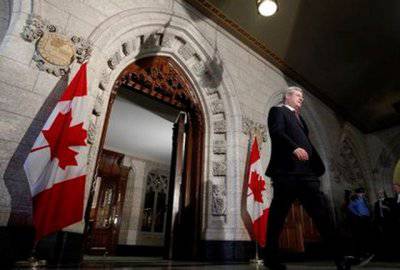 Canada, a particularly close vassal of the United States, is now performing a special task of its master: the loudest of them are shouting to the whole world that “Russia has seized the Crimea,” is warming up Western public opinion. And recalled her ambassador from Moscow. But no one followed her example. It is indicative that Washington laid this dirty mission on the vassal to save his face and freedom of maneuver.


By the way, the Canadian militants were on the Euromaidan under the Canadian flag, they did not hide their affiliation, that they were one of the foreign participants in the coup d'etat in Ukraine. This may be the basis for possible sanctions against Canada, if the coup does not become a revolution. She is already declared accomplished, but this is still a big question, and Canadians go into hysterics: they feel that they can get stuck in history as provocateurs. Washington fully supports the Canadian initiative, in any case, for now, and yet its logic has a boomerang effect.

By this logic, the United States a lot earlier, February 21, invaded and seized Ukraine: Yarosh’s Right Sector militants, led by the US Embassy in Kiev, overthrew the lawfully elected President of Ukraine Viktor Yanukovych. And the pro-American part of the Verkhovna Rada declared itself a “new government”, having trampled on the Agreement with the President of Ukraine on the transition to a parliamentary-presidential republic. The question of the legitimacy of this action is not even worth it, and so frank puppets in power is a challenge to all sensible Ukraine and Russia.

In this situation, the Crimea is simply saved from the invaders, its parliament acts, unlike the Verkhovna Rada, completely legitimate, makes decisions in the light of a perfect state revolution, after which a completely different Ukraine is born: nationalist, Bandera, that is, neo-Nazi (members of the Right Sector "Are part of the Kiev government). To be part of such a state is suicide for the Russian-speaking Crimea.

Yes, Russia helps the people of Crimea to express their will in a referendum, but the US has incomparably more helped their Kiev friends to seize power: mercenaries, money, political support. Russia has the right to this and because the Crimea was turned into a real fortified area, from which it was possible to control the entire south of Russia, to keep it under constant sight.

Judging by the surge in anti-Russian propaganda, it was planned to make it a NATO base. Now, Russia has pulled out a Crimean thorn from its body, and the Crimea is turning into a Russian fortress on the southern borders, and this infuriates Washington strategists even more.

Why was all of this (the coup d'état) done? ”Asked Russian President Vladimir Putin at his press conference. Indeed, why did Yatsenyuk and the company trample down the Agreement on the transfer of power, and went to the seizure of power, losing all legitimacy? After all, Yanukovych fulfilled all their demands, gave them, in fact, all the power ...

Probably, after all that happened, the Bandera power understands that it will not be able to win either the presidential or the parliamentary elections in a fair fight. Normal elections will end in their defeat, so they are already betting on farce. And then legitimacy is just a useless decoration.

On the other hand, everyone understands that there can be no elections at all. This is another reason for the new government of Ukraine to spit on its legitimacy, and hurry to rebuild at least somehow its regime. She is in a hurry, because she knows: Russia will intervene in the “Ukrainian crisis” if unrest begins in the Russian-speaking regions, suppression of the population, excesses of the Kiev type.

But there is one more answer: the real goal of Washington in Ukraine is to create a zone of so-called “controlled chaos”, a civil war on the threshold of Russia. Therefore, his puppets reject from the threshold the only option for the transition to a federal structure that is the only salvation for Ukraine.

Neo-Nazi militants are not only not disbanded, but they are getting more and more power, the Ukrainian society is therefore increasingly polarized. These stubborn facts say that Washington in Ukraine, in fact, goes for our soul: breaking into Russia through the Ukrainian door ...

This is confirmed by the observation of the well-known political scientist Sergei Karaganov: a large-scale smear campaign against Russia intensified about two years ago, that is, the Ukrainian crisis is its next stage.

Why? The answer to this question was given by the “best enemy” of Russia, Senator McCain: “Russia gains confidence”. And Washington today sees in Russia a serious threat to its plans to establish world domination.