200 anniversary of the birth of Taras Shevchenko

March 9 2014
60
At the Smolensk cemetery in St. Petersburg at the entrance to the Church of the Smolensk Icon of the Mother of God lies a large stone with the gilded inscription "Taras Shevchenko." This is the site of the first burial of the famous Ukrainian poet, who died in St. Petersburg from a serious illness almost on his birthday, February 26 (March 10) 1861. 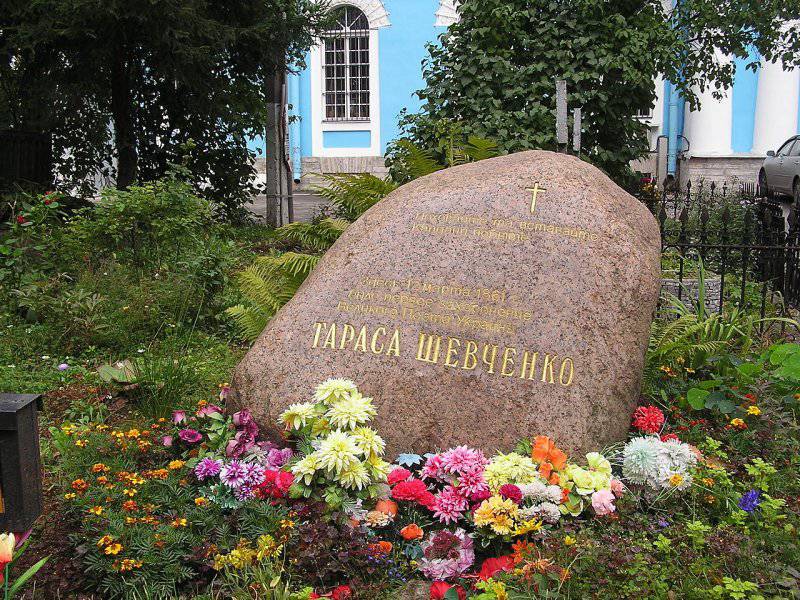 The future Ukrainian poet Taras Shevchenko was born on February 25 (March 9) 1814 in a family of serfs in the village of Morintsy, Zvenigorod district, Kiev province, but grew up in the village of Kirillovka of the same district and considered him their homeland. The childhood of Taras was hard. Mother died very early, and the stepmother did not love other people's children. When Shevchenko's father died, Taras was only 11 years old of the Legacy, and he did not leave any younger son, saying: “Son Taras doesn’t need anything from my farm; he will not be some kind of man: either a very good one will come out of him, or a big villain; for him, my inheritance will mean nothing, or will not help anything. ” Stepmother smacked him for any wrongdoing, and sometimes for no reason. The boy liked to draw, and he was sent to training clerks-painters. There, too, I had to endure beatings, and Taras ran away from the teachers.

Soon the intelligent guy was sent to the landowner Engelhardt. Taras hoped that he would be made a indoor painter, but the landowner decided differently and determined him to be a Cossack in the front. Sitting idle in the corner of the front was boring, and Shevchenko secretly drew anyway. Somehow the landowner found him behind this occupation and, realizing that it was useless to fight, he gave a room painter to study. The teenager was a clear talent for painting, and Engelhardt hoped to make money on it.

Taras Shevchenko studied in Vilna and in Warsaw. In Warsaw, he met his first love, a girl with free views, which made him think about his position. As the poet recalled later: “For the first time I came to the thought, why shouldn't we, the Crepaca, be the same people as other free estates”.

In 1832, Engelhardt moved to St. Petersburg, taking Shevchenko with him. The young man painted portraits of his friends, which the landowner then sold. Somehow Taras painted statues in the Summer Garden and met the Little Russian artist Soshenko. Tom liked the work of Shevchenko, and friendship began between them. Soshenko connected an illiterate serf boy to the public life of St. Petersburg. At this time, the landowner gave Shevchenko a contract to painter Shiryaev.

Most of the day Taras Shevchenko worked in the painter's workshop, and in his spare time, along with Soshenko, he went to art galleries. The artist supplied him with drawing supplies and books, helped him in every possible way. He introduced Shevchenko to Little Russian writer Grebenka, the conference secretary of the Academy of Arts Grigorovich, with the artist Bryullov. Soon the court painter Venetsianov and Zhukovsky learned about Taras. Once Zhukovsky asked Shevchenko to write an essay about the artist's life. Probably, he saw the talent in the young man, as he began to vigorously trouble about his redemption.

Bryullov painted a portrait of Zhukovsky, who then played the lottery. It was attended by persons of the imperial family, and the proceeds were sufficient to buy Shevchenko from Engelhardt. The landowner broke up with the serf for two and a half thousand rubles. So 22 April 1838, at the age of 24 years Taras Shevchenko freed from serfdom.

He entered the Academy of Arts, diligently attended classes, especially Bryullov’s studio, which soon fell in love and brought his talented pupil closer to him. The classes went well, but Shevchenko’s financial situation did not improve, he often lived in debt. Together with freedom came to him a poetic gift. In overcast St. Petersburg, Shevchenko often recalled the native Little Russia, its nature, history.

The very first poetic works of Shevchenko belong to the 1838 year, from the earliest he calls “Causal”, written in the Summer Garden. He wrote on scraps of paper that were scattered everywhere. In 1840, with the help of Combs, these scraps were put in order, and the first book of Shevchenko, Kobzar, was printed. It includes poems "Naymichka", "Causal", "Drowned", "Ivan Pidkova", "Tarasov Nych", "Katerina". In the Ukraine, the book was greeted with enthusiasm, but metropolitan critics, including Belinsky, reacted disapprovingly to it and advised the author to write in the general literary language. Shevchenko used real folk, South Russian language and subjects from the life of ordinary people. Following the "Kobzar" appeared the second book "Gaydamaki".

In 1843, Shevchenko received the title of a free artist and went home. Despite his fame, he still had no money, as well as his own housing. The poet often moved from one city to another. In addition, the artistic environment has taught him to drink. Shevchenko was friends with Princess Repnina, who tried to help him and dissuaded him from drinking drunkenness in letters.

In 1845, Shevchenko stopped in Kiev, where he was approved as a drawing teacher at Kiev University. The poet began to study antiquity, painted ancient buildings. He became close to the participants in the Cyril and Methodius Society, which promoted among landowners the idea of ​​freeing the people from serfdom. In 1847, the society fell under suspicion of the police, and its members were arrested. Shevchenko got more than others - in some of his poems they saw sedition. For this, the poet was sentenced to the soldier’s service in Orenburg with the prohibition to write and draw.

Shevchenko served his service first in Orenburg, then he was assigned to the Orsk fortress. The poet endured the harsh conditions of detention, the joyless bare steppe and the inability to do his favorite work. The expedition brought relief to the lower reaches of the Syr Darya and the Aral Sea, where Shevchenko painted coastal shapes for days. After that, he spent another seven years in the deep Novopetrovsky fortification on the western tip of the Mangyshlak Peninsula.

Since 1853, the situation of Shevchenko has improved significantly, they began to release him from hard work, even from service, and were called upon only in urgent and necessary cases. The poet could now live outside the barracks and spent the whole summer usually in the garden of the commandant, with whom he dined. He made himself a small dugout that still exists and is known as “Shevchenko’s house”. 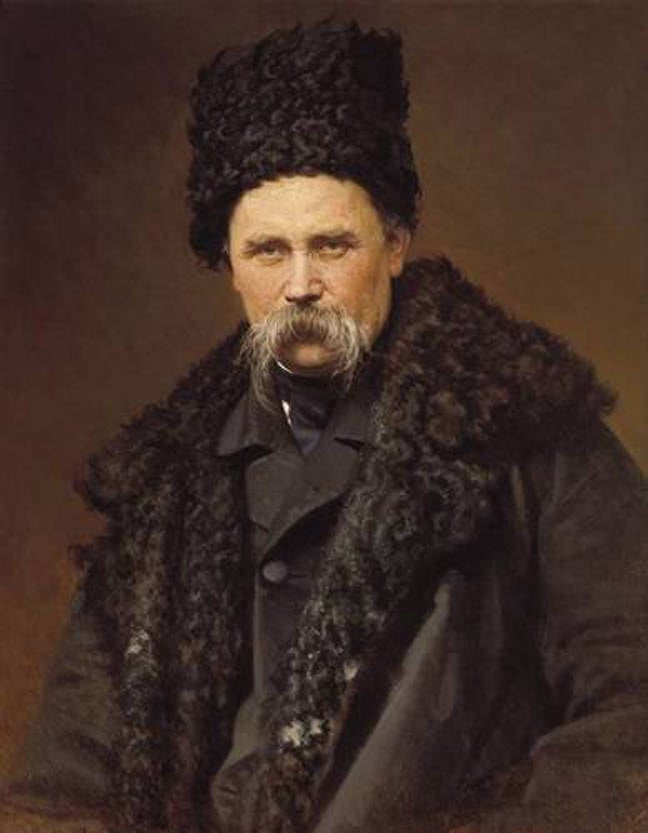 When Alexander II ascended the throne, many received a pardon, but not Shevchenko. He was helped by friends in Petersburg. Countess Tolstaya and her husband, who was then vice-president of the Academy of Arts, took up the efforts to free the poet. They were quite influential, and they paid attention to their petition. The case of the soldier Taras Shevchenko was sent for review and, finally, on July 21 of the year 1857 received an official notice of his release, and in early August the poet went to St. Petersburg through Astrakhan and Nizhny Novgorod.

In February, 1858, Shevchenko received permission to live in St. Petersburg and study at the Academy of Arts. After a heavy soldier’s service of poetry, he almost did not write, in secular society he was bored and dreamed of returning to his homeland. In the spring of next year, he finally broke into Little Russia and visited his sister. Then he returned to St. Petersburg and made the final decision to leave and settle on the banks of the Dnieper. The poet was already 45 years old, but his housing was still not there. Together with a friend, he chose a place near Kanev, on the right bank of the Dnieper, to buy the manor. In the personal life of the poet also no luck. Shevchenko tried several times to woo, but failed. In recent years, he was no longer looking for a wife, but simply a hostess, but still unsuccessfully.

Even before the conclusion of Shevchenko was going to do the spread of literacy among the people and in St. Petersburg, he set about doing business. So the Little Russian ABC compiled by him appeared. Future plans were also to write textbooks on arithmetic, ethnography, history and geography in Ukrainian, but Shevchenko did not have time to carry out his plans. Since the end of 1860, the poet has become seriously ill. Doctors diagnosed dropsy and advised him to beware. Shevchenko was staying at home. Friends visited him, and in February 1861, he barely got out of bed. February 26 (March 10) at five o'clock in the morning the poet drank a glass of tea and went downstairs to his workshop; but here he became ill, he fell down and died half an hour later.

Dust Shevchenko was buried first at the Smolensk cemetery in St. Petersburg, and then transported in the coffin, covered by the Cossack custom of pure red Chinese, to Ukraine, according to the last will of the deceased. The last return home was difficult. The fact is that because of being in exile, Shevchenko was considered an unreliable political criminal, and for his burial in Little Russia, official permission of the authorities was required. Therefore, until receiving this permission, the friends decided to temporarily bury the poet in Petersburg. In Little Russia, too, did not immediately determine the place for the grave. In Kiev, the Metropolitan forbade the burying of Shevchenko, and then friends decided to take the coffin to Kaniv, on the Black Mountain, where the poet wanted to settle.

The last stage of the funeral procession went solemnly: Kiev students joined it, girls in bright folk costumes and wreaths were voting in front of the coffin. 22 May 1861, the poet’s coffin was finally buried in a crypt on the Black Mountain, which was immediately renamed Tarasov Mountain. The tomb was disturbed only once, in the 1939 year, after which it was decided to wall the entrance with a reinforced concrete slab, so that even during the occupation the Germans did not touch Shevchenko’s grave.

The building of the Academy of Fine Arts on the University Embankment in St. Petersburg has a memorial workshop-museum of Taras Shevchenko preserved. He had a great influence on Ukrainian literature as a popular peasant poet. Also, his work was reflected in Polish literature, his poems translated into many Slavic languages.

Ctrl Enter
Noticed oshЫbku Highlight text and press. Ctrl + Enter
We are
Life of the Yenisei province of the late XIX - early XX centuryChildren's alphabet about the 1812 war of the year, published in 1814
Military Reviewin Yandex News
Military Reviewin Google News
60 comments
Information
Dear reader, to leave comments on the publication, you must sign in.