Nazarbayev: Kazakhstanis must be sure that the army is efficient 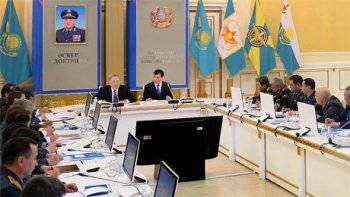 
The head of state noted that he always pays close attention to the issue of strengthening the country's defense.

- Kazakhstanis should be sure that the army is efficient and can fulfill its tasks and orders of the Supreme Commander. In recent years, army funding has been steadily increasing, the cumulative three-year budget has reached one trillion tenge. And this is in a difficult economic situation in the world, when even the rich countries of Europe are forced to reduce not only military spending, but also social programs. The state is doing everything for the armed forces and military personnel. In the past year alone, about 7 thousands of servicemen were provided with housing, 5430 was paid compensation for housing rent. The average monetary allowance of an officer of the armed forces is 170 thousand tenge. Pension security for military personnel is the highest among all categories of citizens of the country. In response to such concern, the people of Kazakhstan have the right to expect high combat readiness from our army, and crystal honesty from military personnel, ”said Nursultan Nazarbayev.

The President of Kazakhstan emphasized that the leaders in the central office of the ministry and regional commands, in various branches of the military, are responsible to the people for the execution of the tasks assigned.

“Therefore, I, as the Head of State and the Supreme Commander, and all citizens of the country, have a well-founded concern about the facts of corruption occurring in the defense department. Kazakh society sees this as a direct threat to national security. In the Armed Forces this is unacceptable. State funds allocated to the army should be used strictly for the intended purpose. Appropriate measures should be taken to ensure that such facts do not recur, ”Nursultan Nazarbayev emphasized.

The President of Kazakhstan noted the need to maintain high intensity combat training in the troops.

- Conducted exercises should be aimed at working out tasks as close as possible to the conditions of the current situation. We will suddenly check the combat readiness of certain parts of the regional commands. It is also necessary to improve the coordination of all power structures, at the international level to develop cooperation with our allies and partners. Combat training programs should be filled with new content that is adequate to modern threats, said Nursultan Nazarbayev.

In addition, the Head of State stressed that the latest models of military equipment are being adopted annually.

- We buy military products not only in Russia, but also in other countries. The army has the opportunity to rearm, using the most advanced world-class developments. We must not lag behind anyone in this direction. The country's military-industrial complex has begun assembling helicopters, military optics, radar systems and electronic warfare, and ships are being built for the naval fleetrepair organized aviation and armored vehicles. But this is not enough, it is necessary to expand this work, - said the President of Kazakhstan.

The head of state called the construction of new defense plants one of the most important areas of the country's industrial development.

- Due to the work of military factories, other industries will also develop, and orders from other sectors of the economy will also be coming. Therefore, the Minister of Defense together with the Government should have a clear vision of what objects we will build. For example, the issues of the production of ammunition and shells do not tolerate delay. It is necessary to increase the pace of military-technical modernization and step up the process of re-equipping our army. The range of products manufactured by the military-technical enterprises of the country should be expanded to provide not only the armed forces, but also law enforcement agencies and special services, ”Nursultan Nazarbayev emphasized.

The head of state drew attention to the need to adjust personnel work in the Armed Forces.

“Perhaps we should reconsider the age limit of service in various categories of troops.” Thus, the state spends significant funds on the training of flight personnel, and to obtain the required level, pilots need a lot of training time. However, upon reaching the appropriate age, despite good health and high professionalism, the officer is forced to resign. We can not refuse from highly qualified personnel only for age reason. It is necessary to consider the possibility of introducing appropriate amendments to the law on military service, Nursultan Nazarbayev said.

In addition, the Head of State noted that to be promoted to a higher position, the availability of appropriate professional training and the level of military education should be a prerequisite.

The President of Kazakhstan also stressed that the constant reorganization of the troops causes an unhealthy situation in the army.

- This is a very dangerous trend. Only in 2012, 260 organizational measures and 320 million tenge was spent in various types of troops. In 2013, 116 organizational events were held, 490 million tenge were allocated additionally. This leads to nervousness among the personnel and entails expenses for the payment of lifting and severance pay for military personnel. But the most important thing is that in such conditions the combat readiness of the troops is reduced. I demand to minimize the number of organizational and staff events, as “empty” work, which creates the appearance of activity, said the Head of State.

Nursultan Nazarbayev emphasized that our country is consistently building a system of higher military education.

- We did not have a systematic training of officers, especially the top staff. We cannot teach them abroad all the time; we must do this in Kazakhstan. It is necessary to continue work on equipping military high schools with modern equipment, on training their own scientific and pedagogical personnel, which will be no worse than in other countries. I hope that this year the National University of Defense will begin its work. His graduates should be the pride of the Kazakh army, - said the Head of State.

The President of Kazakhstan noted that uncertainty remains around the country’s surroundings.

- The legal status of the Caspian Sea is not defined, the coastal states are militarized. There are also risks associated with the withdrawal of coalition troops from Afghanistan. In this regard, I instruct to continue work on the qualitative strengthening of groupings in the southern and western strategic directions, ”the Head of State emphasized.

The Supreme Commander drew attention to the fact that professional armed forces in the 21st century should be staffed by high-quality military specialists, true patriots, psychologically stable and morally flawless citizens of the country.

- The basis of the Armed Forces are officers, sergeants, that is, people who deliberately dedicated their lives to serving the Fatherland. We need to take additional measures to improve educational and patriotic work, to strengthen the morale of all the military, from soldier to general, the President of Kazakhstan said.

In conclusion, Nursultan Nazarbayev noted that attention to the development of the Armed Forces is the duty of each state, and wished the entire military staff of the Ministry of success in their activities.

Ctrl Enter
Noticed oshЫbku Highlight text and press. Ctrl + Enter
We are
The action “Military service under the contract is your choice!” In Rostov-on-Don: future contract servicemen, exhibitions and “Russian Knights”
Military Reviewin Yandex News
Military Reviewin Google News
154 comments
Information
Dear reader, to leave comments on the publication, you must sign in.