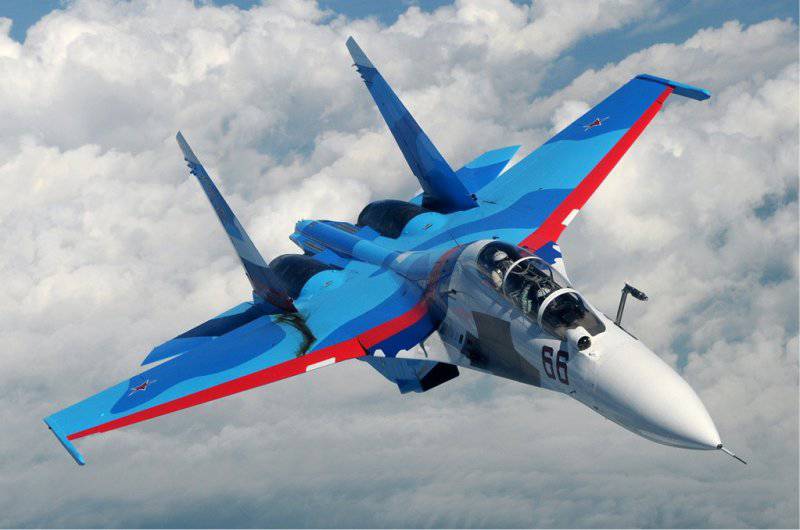 Military-technical cooperation of Russia with foreign countries continues to develop, despite the widespread forecasts of recent years about the coming recession. At present, our country occupies a stable second place in terms of arms supplies to the world market. For example, in 2013, the volume of export deliveries through Rosoboronexport amounted to 13,2 billion. The United States was the leader in 2013, with supplies in the amount of 23,6 billion, and France was in third place (6,9 billion.). Approximately the same was the ratio of supply volumes and final places in 2012.

Standards of military-technical cooperation of Russia with foreign countries, developed in the late Soviet period and in the post-Soviet period, allow us to identify several main areas of cooperation strategy depending on the partners.

The first, the most laborious, but at the same time the most politically significant and stable line of cooperation is aimed at the transfer of licenses and in some cases the joint development of military equipment. Today, such a strategy is fully implemented only for India, embodied in large contracts, for example, for licensed production of Su-30MKI planes (contracts for 140 machines in 2000 and two additional machines for 40 and 42 in 2007 and 2012. respectively), not including purchased in finished form. In total, at the beginning of 2013, India had approximately 170 Su-30MKI fighters that came from Russia or were fully or partially assembled domestically from the supplied vehicle sets [1]. The total cost of Su-30 supplied to Indians, including parts and accessories, service, pilot training, etc., is estimated by experts at 12 – 15 billion dollars (1, 2) 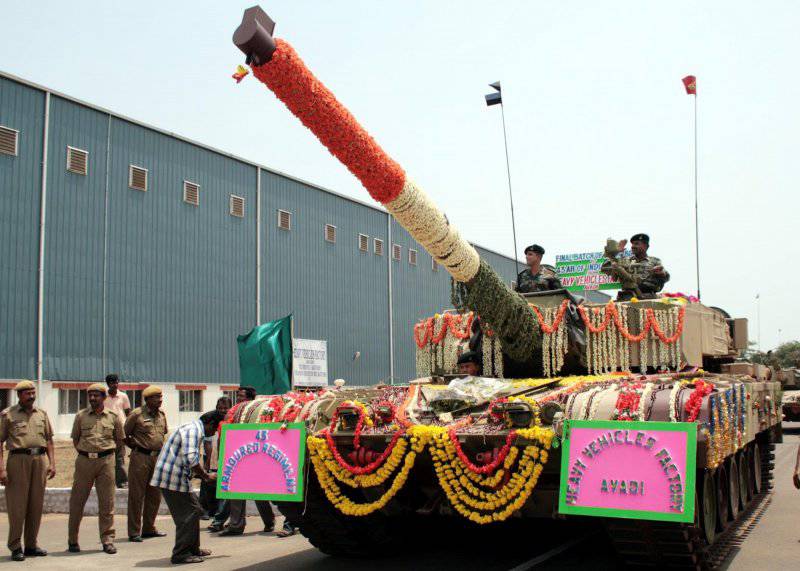 The second area of ​​cooperation is related to a tank T-90 From 2001 to 2007 In total, Russia and India concluded contracts for the supply of nearly 2000 T-90 tanks worth about $ 6 billion. Of this number, more than 1700 tanks should be assembled in India from Russian car kits, the rest delivered from Russia ready-made. Currently, the Armed Forces of India have approximately 800 T-90 tanks, of which more than half of the local assembly. Production volumes are gradually growing - the production capacity of the Heavy Vehicles Factory (HVF) state-owned plant allows the production of up to 140 tanks per year.

It should be noted that the licensed production of the supplied vehicle sets was practiced during the Soviet era - for example, T-72 tanks, MiG-27 fighter-bombers and some other types of weapons were supplied to India.

As part of the joint development of various weapons systems, agreements on cruise missiles PJ-10 "Brahmos" (1998) and the fifth-generation fighter FGFA (2007) became the most notable contracts. In both cases, the basis of promising developments are Russian prototypes - the P-800 “Onyx” rocket and the T-50 fighter. And if “Onyx” was already in trial operation by 1997, then at the time of the conclusion of the agreement on the development of FGFA T-50 existed only in the form of layouts and individual elements. The first flight of the car took place in January 2010.

Currently, the parties are working together on the project of a multi-purpose transport aircraft MTS / MTA. Cooperation in the naval sphere is actively developing. It is enough to mention the transfer of the Indian Navy after the long modernization of the aircraft carrier Vikramaditya, the lease of the submarine of the 2013I Chakra project, which was completed in accordance with the project that was changed to meet Indian requirements, held in November 971 in November. October 2013, serial construction of frigates of the project 11356, etc.

In all the cases mentioned, India and Russia pursue their goals. India is becoming a financial donor for Russia, whose investments significantly speed up work, support enterprises afloat, and also guarantee a sales market in addition to domestic. In turn, Russia serves India as a source of high technology in industries where Indian industry has been lagging behind the leaders for decades. 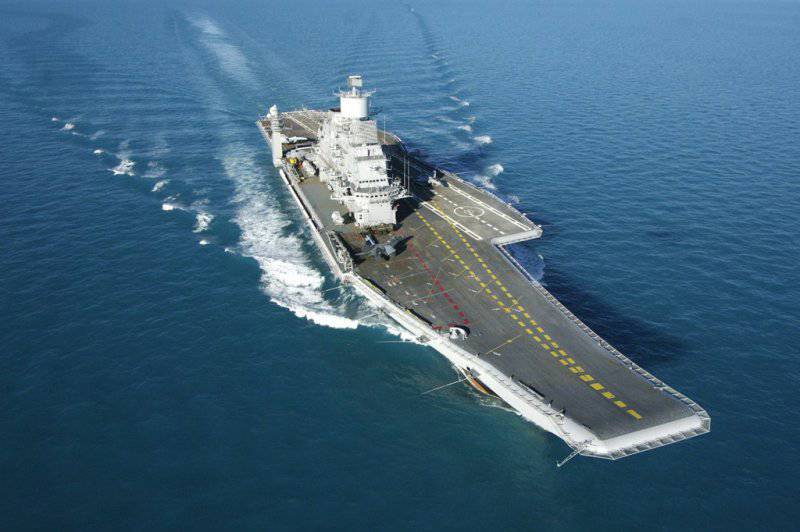 Among the countries to which Russia applies or seeks to apply this strategy of military-technical cooperation, China, Brazil and South Korea are worth mentioning. And in all three cases, the cooperation has its own characteristics. China, which was actively producing weapons under the Soviet licenses (and then the “pirated” method) in 1950 – 1980's, returned to the purchase of Russian technologies to improve its military-industrial complex after the restoration of normal relations with Moscow. However, from licensed copies of the Chinese very quickly moved to the independent production of equipment, reproduced on the basis of the samples. At the same time, in a number of cases, copying was facilitated by technological assistance from Russian and Ukrainian design bureaus who were hungry in 1990 – 2000s. Such is история the appearance of J-11, J-15 fighters, Y-20 transport aircraft, HQ-9 anti-aircraft missile system and a number of other samples. At the same time, the achievements of the People's Republic of China in the field of copying foreign technology have not yet found a continuation in its development. Therefore, it is possible to predict the resumption of China's interest in new Russian developments as the generation of weapons systems manufactured by the Russian defense industry changes. The first signal of this kind was the interest shown by China to the Su-35C fighter, the most advanced version of the T-10 platform (Su-27) for today.

South Korea, in turn, makes mainly a bet on the joint development of new technology with the participation of Russian design bureaus. Thus, the KM-SAM anti-aircraft missile system and the Naro-1 launch vehicle (KSLV) were created. In both cases, at the start of work in the first half of 2000, there were no working prototypes of these systems. The Russian participants of cooperation - "Almaz-Antey" in the case of KM-SAM and the NPO. Mv Khrunichev in the case of “Naro-1” - used these contracts to work out their promising systems - the Vityaz air defense missile system and the Angara launch vehicle, respectively.

As for Brazil, Russia seeks to interest in its joint development capabilities in the field of combat aviation and air defense systems. If this can be done, it will be possible to talk about the formation of a certain circle of developed countries using Russian developments in the design and production of their own military equipment. Such a development of events will significantly increase the stability of the Russian defense industry in the most responsible and most high-tech sphere. 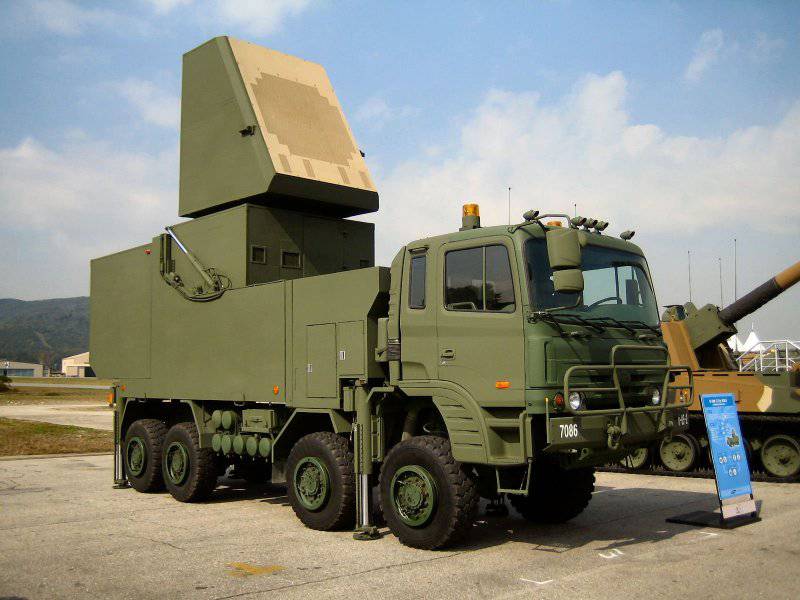 The second strategy of military-technical cooperation concerns a fairly wide range of countries that have relatively large financial resources and allow themselves to buy expensive military equipment. We are talking about Indonesia, Malaysia, Vietnam, Algeria, Iraq, Venezuela, Azerbaijan and a number of other states. Cooperation with them is characterized by rather large volumes of contracts: 7,5 billion dollars - with Algeria, more than 5 billion dollars - with Vietnam, more than 4 billion dollars - with Azerbaijan. They purchase modern models of military equipment or their simplified versions (Su-30MKI (A), MKM or MK2 fighters, T-90С tanks, Mi-28 helicopters, MI-35М, etc.), providing in aggregate not less than the volume of export orders than mega contracts with India or earlier, in 1990 – 2000-ies, with China.

Prospects for military-technical cooperation in this area are often questioned due to political risks. Thus, the “Arab Spring” has led many experts to talk about the upcoming cessation of cooperation with the countries of the Middle East, and the death of Hugo Chavez questioned the cooperation with Venezuela. However, these fears were exaggerated.

The most significant refutation of the opinion about the futility of Russian military exports in the Middle East was the new contract for the supply of helicopters, air defense systems and other weapons for Iraq in the amount of 4,2 billion, concluded in the fall of 2012. Supplies under this contract were launched in the fall of 2013. Military-technical cooperation with Libya also resumed. The self-propelled anti-tank complexes "Chrysanthemum" ordered by the government of M. Gaddafi (according to some information, infantry fighting vehicles BMP-3) were delivered to this country. It is obvious that the Syrian government will also purchase modern military equipment in Russia, and the cooling of Russian-American relations will open the way to a resumption of arms supplies to Iran. It should be noted that after the change of power in Iran and against the background of disagreements with Saudi Arabia, the United States can react to a possible resumption of cooperation between Russia and the Islamic Republic much less sharply than 5 – 7 years ago. 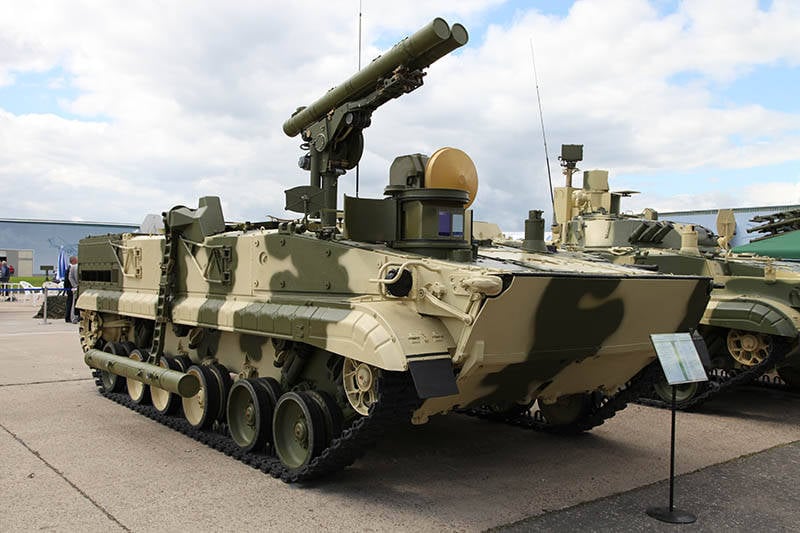 Finally, the third strategy of military-technical cooperation of Russia with foreign countries concerns the countries of the third world. It is mainly about poor or moderately developed countries in Africa, Latin America and Southeast Asia. Contracts with these countries are, as a rule, one-time in nature and are concluded in relatively small amounts - from several million to several hundred million dollars.

However, large revenues are also found here: for example, in October 2013 a contract was signed with Angola for the supply of weapons for a total amount of 1 billion dollars. The package of delivery included spare parts for Soviet-made weapons, a small light weapon, ammunition, tanks, artillery mounts and Mi-17 multi-purpose helicopters. In addition, the parties agreed to build a plant for the production of cartridges in Angola. The agreement also included the supply of 18 repaired and armed Su-30K fighters that were previously part of the Indian Air Force. Su-30K were delivered to India under a contract from 1996. This agreement implied the transfer of the Su-30MKI fighters to the Indian Air Force, but in 1997 – 1999. By mutual agreement, the aircraft was delivered to the customer in a simplified version K with the obligation to replace them with more advanced MKIs. Later, Russia handed over X-NUMX Su-18MKI to India, simultaneously issuing a formal return of the Su-30K, but until July 30, they were all on Indian territory.

This contract fairly accurately reflects the composition of the bulk of agreements concluded with third-world countries, including with Russia's least developed CSTO partners such as Kyrgyzstan and Tajikistan. We are talking about the supply of spare parts, small arms, ammunition, armored vehicles (as a rule, repaired second-hand from the available in the Armed Forces of Russia), used aircraft. The exceptions are helicopters and cars, which are mainly purchased by new ones. 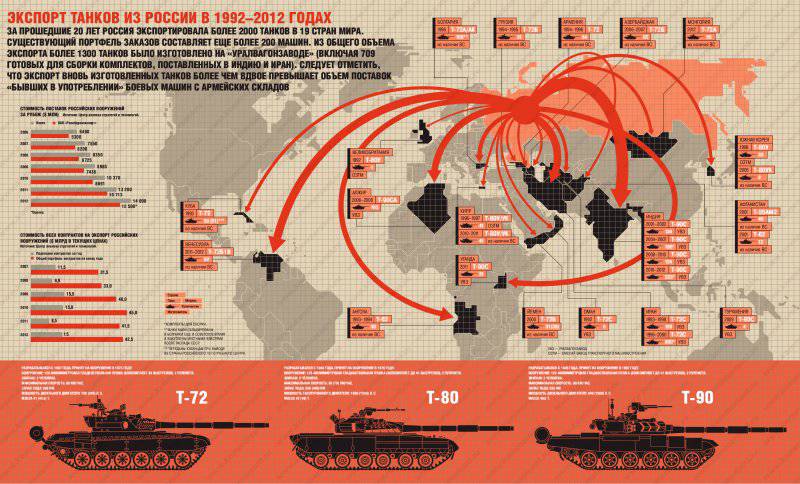 Regarding cooperation with Angola, it should be noted that further economic growth and an increase in military spending can transfer this country to the “second strategy” group if it decides to develop relations with Russia in this sphere. In the meantime, the number of countries of the “third strategy” is the largest: according to experts, they constitute 2 / 3 from more than 70 countries belonging to the geography of cooperation of Rosoboronexport. However, the annual income from this group is relatively small and, according to estimates, does not exceed 10 – 15% of the total supply. In this group are often politically motivated transactions. This concerns, first of all, the already mentioned partners of Russia in the CSTO, for whom military assistance from Moscow is a pledge of political stability and preservation of the existing regimes.

The current strategies of military-technical cooperation demonstrate the variety of tools used by Russia in this field in order to extract revenues and strengthen its political influence. At the same time, political motivation can be different: from supporting allies in key areas (supplies for the CSTO countries), fixing on certain new / well forgotten old markets to increasing influence in the region (Venezuela, Angola) or maintaining and strengthening relations with strategically important partners (as is the case with India).

Depending on the capabilities and significance of partners, Russia is ready for various forms of cooperation, including the development of assembly / service facilities in the customer’s country. This takes into account the risk of technology leakage. Today, only the most developed industrial powers have the ability to quickly copy modern military equipment. In addition to Russia, these include the United States, some NATO members that do not purchase Russian weapons, and China. In general, a strategy of "lagging exports" when exporting mainly products of the previous generation compared with those produced for their troops serves as a sufficient guarantee against technology leakage. This strategy, which was successfully used in the USSR, is actually being revived in the current conditions, when the Russian defense industry is developing a new generation of equipment and weapons for the army, air force and fleet.