China will celebrate the Victory Day over Japan. Japan is concerned about rising Chinese military spending 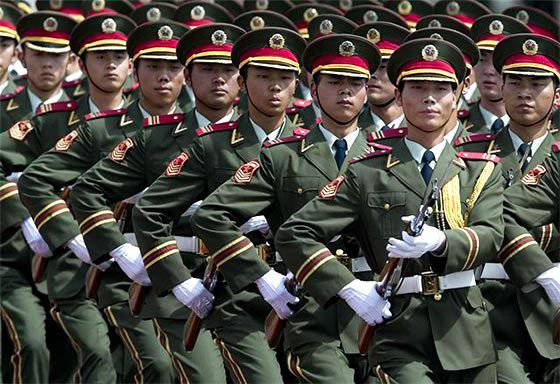 The information war between Beijing and Tokyo continues to gain momentum. The old conflict between China and Japan is in fact no longer trying to extinguish. On the contrary, both powers regularly give rise to tensions in the region. So, recently in China decided to establish two new public holidays: Victory Day over the Japanese invaders and the Day of Remembrance for the Victims of the Nanking Massacre. In addition, the Chinese are suing Mitsubishi Materials for the war. Japan, however, is concerned about the growth of China’s military spending and the lack of transparency in this area. All this causes a rise in regional tensions and an open course towards militarization in a number of countries in the Asia-Pacific region.

The general military past does not give rest to either the Japanese or the Chinese. 25 February 2014 of the year the Chinese government issued a decree establishing a new national holiday. China will celebrate "Victory Day over Japan." At the same time, the Chinese authorities intend to introduce the "Day of Remembrance for the Victims of the Nanking Massacre."

It is expected that 3 September in China will celebrate victory in the war with the Japanese Empire. Japan attacked China 7 July 1937, and the war continued until 1945, when the USSR and the USA defeated the Japanese Empire. Japan during the war occupied a large part of China, its most developed and coastal areas. Also, we should not forget that Japan began the intervention against China back in 1931, when Japanese troops captured Manchuria and created a pro-Japanese puppet regime there - the state of Manzhou-Guo.

The Day of Remembrance for the Victims of the Nanking Massacre is going to be introduced to honor the dead at the hands of the Japanese military in Nanking. 13 December 1937, the Japanese army captured Nanjing. The occupation was accompanied by mass violence and murder. The Japanese soldiers staged a terror in the spirit of "three completely clean" - "burn out clean", "kill everyone clean", "steal clean". The Japanese slaughtered to 300 thousand people, thousands of women and girls were raped. The Nanjing massacre became one of the most famous crimes during the Second World War. In total, China lost millions of lives during this war. The figures are from 21 to 35 million.

This decision is taking place against the backdrop of a sharp deterioration in the serious deterioration of relations between the great Asian powers. In November 2013, Beijing unilaterally introduced a new air defense identification zone in the East China Sea. This decision caused a sharp reaction from Japan, South Korea, who have territorial conflicts with China in this area, as well as their ally - the United States. The Japanese and South Korean Air Forces began regular patrol flights around the disputed islands.

In December 2013, Japan announced an increase in military spending. Japan plans to increase the offensive capabilities of the armed forces. Self-defense forces will have the right to strike outside the Japanese islands. Their mobility will be enhanced. Japan is going to approve the right of collective self-defense. If any power attacks Japan’s ally, Tokyo will help him. In the military sphere it is planned to classify a significant part of issues related to defense and the military field. The strike power of the air force and navy will be enhanced. They will create mobile (airborne) forces capable of fighting for the disputed islands.

Moreover, China, along with North Korea, was called the main threat in the region. According to the Japanese, Beijing wants to change the balance of power in the APR. Japan began to free itself from the last chains, which prevented it from developing the military-industrial complex, military-technical cooperation. Military contacts with Great Britain, France, Turkey and India were intensified. At the end of February 2014 of the year, the Japanese government announced a bill that would change the country's military export regulations in force since 1967. Now enterprises of the Japanese military-industrial complex will be able to supply their products to countries with communist regimes. Thus, Japan is exempt from the latest restrictions on military exports. Tokyo implements the concept of transition from “passive pacifism” to “proactive pacifism”, which Shinzo Abe stated in the 2013 year. Japan intends to more actively participate in the "establishment of world peace" and in international military cooperation. In 2015, they plan to revise the ninth article of the Japanese Constitution, which prohibits the Japanese army from participating in international conflicts.

At the end of 2013, Japanese Prime Minister Shinzo Abe visited the Yasukuni temple, where he honored the souls of the dead Japanese soldiers. Beijing, Pyongyang and Seoul expressed their indignation, believing that Japanese politicians venerate the souls of Japanese war criminals.

In January, on the initiative of the People's Republic of China and South Korea, a memorial was erected at the station in Harbin, which was dedicated to Korean underground worker An Chunggyn. He shot and killed the first Japanese governor in Korea, Prince Hirobumi Ito, in 2014. The underground worker was captured and hanged in a Japanese prison in 1909. In Korea, An Chungung is considered a national hero.

It should be noted that Korea and Japan also have a long история mutual "friendship." Korea was considered a vassal of China for a long time, but as China weakened and decay in the second half of the 19th century, the Japanese Empire began to lay claim to the Korean peninsula. For some time, the Japanese were restraining the appetites of the Japanese, but in 1904, Japan seized Korea. In 1905, Korea first came under the “protectorate” of Japan, and from 1910 to 1945. she was under complete Japanese control. During this period, Japan, in fact, pursued a policy of genocide and cultural and language discrimination. Koreans were forced to switch to Japanese, to accept Japanese names, Korean men were driven into labor camps and turned into slaves, Korean girls were forcibly turned into sexual slaves for joy to the Japanese. Korea was a raw materials appendage and a source of slave power. All uprisings were drowned in blood. Korea was liberated from the Japanese yoke only in 1945, when the victorious Soviet army defeated the Kwantung Army.

In response to the installation of a monument to the Korean underground fighter in Harbin, Tokyo expressed an official protest to Beijing and Seoul. A spokesman for the Japanese Foreign Ministry said: "Such a move is extremely regrettable." Yoshihide Suga, Secretary General of the Japanese Cabinet of Ministers, said that An Chungung in Japan is considered a criminal.

The degree of intensity of relations between Japan and China was well described by the Japanese Prime Minister Shinzo Abe at the forum in Davos. The Japanese Prime Minister compared the tensions in the current relations between the two great Asian powers with the pre-war relations of the British Empire and Germany on the eve of the First World War. The culprit of instability in the Abe region, called China in connection with its military buildup.

At the end of February 2014, the Chinese sued Mitsubishi Materials for the war. The Chinese court accepted the 37 Chinese lawsuit. The Chinese demand compensation for forced labor during World War II. During the war, the Japanese empire used Chinese forced labor in its enterprises in the occupied territories. The victims and their families want justice. Earlier in Japan, dozens of similar lawsuits were filed against the Japanese government and companies that were associated with Japan’s intervention in China. However, the Japanese courts rejected them. Failing to get justice in Japan, the plaintiffs will now sue in China.

Apparently, the plaintiffs will succeed in the Chinese courts. However, the chances that a court decision will be implemented outside of China are few. In fact, this litigation is another blow to the information war between China and Japan. In addition, Beijing can get another lever for pressure on Tokyo.

Tokyo believes that the issue of war reparations was finally resolved by the San Francisco Peace Treaty of 1951 and the bilateral agreements that followed. In 1972, a joint statement was adopted, and all the problems of compensation for the war period were resolved.

The information war between Beijing and Tokyo has been whipped up by the accusation put forward by China that Japan is accumulating plutonium. China suspects Japan that the Japanese are preparing to create an atomic weapons. Xinhua news agency reported that Japan has materials for the production of atomic weapons. A spokesperson for the Chinese Foreign Ministry, Hua Chunin, said at a press conference in Beijing that Japan has a significant amount of weapons-grade plutonium. Tokyo operates contrary to the rules established by the International Atomic Energy Agency (IAEA). Beijing is asking to clarify this issue. A suspicion arises: does Tokyo really think of acquiring its own atomic bomb?

Japan really has plutonium. He was provided by the United States during the Cold War. Deliveries carried out and the UK. According to official data, for research in fast reactors. Studies were conducted at the Tokaimura Science Center in the north-east of the main island of the country Honshu. In total, by the end of 2012, Japan had accumulated 331 kg of plutonium. In 2010, Washington asked Tokyo to return plutonium in order not to violate the nuclear nonproliferation regime. The Americans used their old trump card on the "dangers of international terrorism." They say that weapons-grade plutonium can fall into the hands of terrorists.

For some time Tokyo resisted, did not want to return plutonium. Thus, Japan adopted a new energy plan, the basis of which was the return to the use of nuclear energy as the main source of energy in the country. Tokyo has no alternative energy sources that are able to provide all the needs of the population and the economy. In Japan, it was alleged that the return of plutonium would hurt the country's research. However, with increasing pressure from the United States, Japan was forced to yield. The final decision on this issue should be taken at the third international summit on nuclear safety, which will be held in the Netherlands on March 24-25.

China is increasing its military capabilities. Japan is protesting

4 in March, a spokesman for the National People’s Congress, threatened to respond decisively to the violators of peace in the region. According to Fu Ying, the PRC is a supporter of the peaceful resolution of conflicts and the army is designed to defend the country, but Beijing is ready for an “effective response” to violations. China will not only defend its "territory and sovereignty," but also seek to "restore peace and order in the region."

March 5 opened a session of the National People’s Congress. The government reported that military spending will increase by 12,2% compared to 2013 year and amount to 131,5 billion US dollars. In recent years, China has experienced a steady and significant increase in military spending. In 2013, China had a military budget of 117 billion dollars, increasing national defense spending by 10,7% compared to 2012 year. In 2012 and 2011 the growth of military expenditures amounted to 11,2% and 12,7%, respectively. At the same time, many Western military experts believe that China’s real military spending is much higher than official figures and is approaching 200 billion dollars. Beijing, besides the main funding from the defense budget, finances many related programs related to national security.

It is clear that Japan is on such news reacted negatively. Yosihide Suga, the secretary general of the Japanese government, said that Japan is concerned about the rapid growth of military spending in the PRC. According to him, the growth of China’s military spending is “a matter of concern for the world community.” “The PRC’s defense policy and military capacities lack transparency,” the Japanese statesman said.

Ctrl Enter
Noticed oshЫbku Highlight text and press. Ctrl + Enter
We are
Results of the week. “A terrible holiday spirit was hovering in the air.”Strangulation: the context, conduct and consequences of the American naval blockade of China
Military Reviewin Yandex News
Military Reviewin Google News
70 comments
Information
Dear reader, to leave comments on the publication, you must sign in.