The German army is preparing for global operations tank Leopard 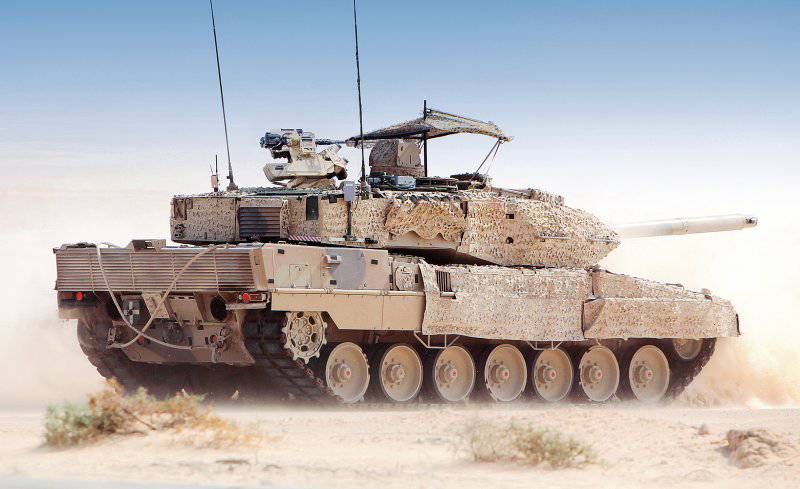 Demo sample tank Leopard 2A7 +, tested in the hot climate of Qatar, is equipped with a Barracuda camouflage system that reduces the temperature inside the machine, as well as radar and thermal signatures. On the roof of the tower mounted combat module Rheinmetall FLW200 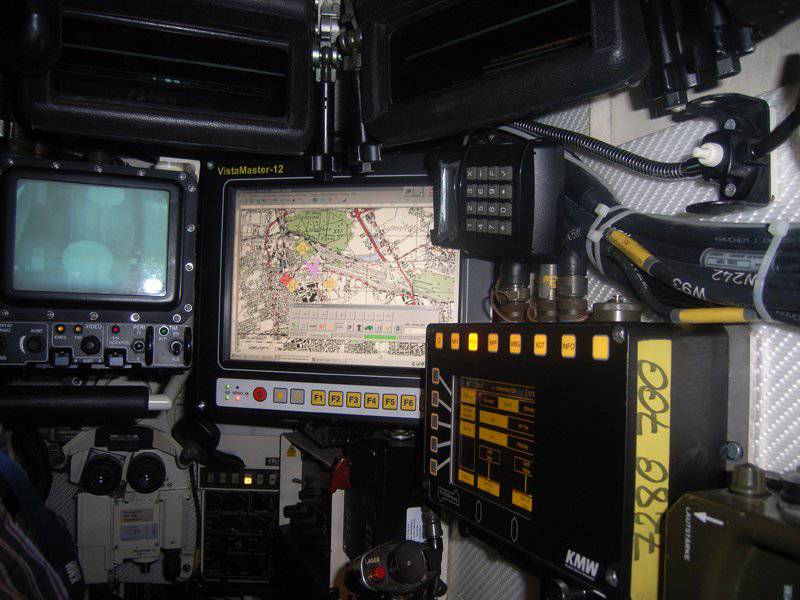 Inside the turret of the tank Leopard 2A7 +. At the commander's place, various fire control and situational awareness displays are installed. These include the control unit (right) of the commander. which, among other functions, is responsible for firing a programmable universal high-explosive fragmentation shell Rheinmetall DM11

The German army is to begin troop testing of the newly upgraded Leopard 2A7 tanks in 2014, when Krauss-Maffei Wegmann (KMW) is expected to deliver the first improved vehicle. The KMW project is based on the 'Leopard 2A7 + (UrbOp)' demo that KMW developed for peacekeeping and urban operations in close collaboration with the German army.

Leopard 2A7 + (UrbOp) was shown to the public at Eurosatory 2010 after signing in July of 2009 of the contract for the supply of the initial batch of 20 machines.

Tank Leopard 2A7 is in demand, primarily for the increased capabilities that it brings to the expeditionary operations. The first machines will include only some of the proposed menu items for A7 + (UrbOps) from KMW. The cars will have climate control, a Steyr auxiliary power unit on the 17 kW (more powerful than the Leopard 2A5 / 6 already installed on export tanks), the new Thales SOTAS digital intercom system and the Cassidian IFIS fight control system (Integriertes FuhrungsInformationsSystem). All of this will be added to the Barracuda camouflage and thermal control system already in place on the Leopard 2A6M version of the Leopard XNUMXAXNMXM and the MPK anti-mine kit.

What is very important, the A7 tank will also become the first option capable of firing programmable ammunition, primarily a DM11 multi-explosive high-explosive projectile (for the destruction of helicopters, personnel, structures and lightly armored vehicles). The 2500 shipments of these shells, which the Bundeswehr had already ordered from Rheinmetall, began in the 2013 year.

The DM11 ammunition programmer requires the installation of a new programming ring in the breech of the 120 smoothbore mm Leopard 2A7 gun plus special displays on the shooter and commander’s places.

The integration of the IFIS BIS also requires the installation of new displays on the loader, driver and commander (plus a removable laptop for the commander for meetings and task scheduling), which requires a significant re-assembly of all data-display systems inside the tower.
The deliveries of vehicles of this party should begin in April 2014 of the year, they will be equipped with one company of 14 tanks for expeditionary missions and rapid response operations. The extra machines will be used for testing, training and combat replacements.

The Bundeswehr is currently armed with 350 Leopard 2 tanks, but by the end of 2015, their number is expected to decrease to 225 operated vehicles, including 155 Leopard 2A6, 50 2А6М and 20 2XXNUM. (A certain number of Leopard 7A2 tanks will be left for use by the conditional enemy in the combat training center of the German army in Altmark)

Of this total, the agreed number of upgraded machines (up to the standard A7 and above) is 100 units, but for financial reasons, the supply of the remaining 80 tanks will be phased in between the 2019 and 2025 years. These 80 tanks are expected to include more modifications to the standard UrbOps than currently offered; they will receive the designation A8 - the standard to which eventually the A7 version machines will also be brought.

These tanks, intended for further modernization, include all models of Leopard 2A6M, equipped with MPK, which the Bundeswehr purchased today 70 units. Another 30 MPK, therefore, will be necessary to form a complete fleet of A7 / A8 options.

The Leopard 2A8 model will include additional elements from the UrbOps kit, including a searchlight, new commander and gunner sights, improved surveillance devices, (light) dozer blade, Rheinmetall FLW200 remote combat module, improved all-ballistic protection (designed for installation, but not installed) , and circular panoramic vision (networking of the driver’s cameras, the sight of the commander, the cameras of the local situational awareness system and the combat module).

The Leopard 2A6M, like the predecessor Leopard 2A6, also has a long-barreled version (L55) of the 120-mm Rheinmetall smooth-bore gun and, by default, the initial batch of the A7 version will have a similar gun. However, in urban areas, a shorter version of the L44 (mounted on the A5 model) has less potential effect on the maneuverability of the vehicle and therefore some of the A8 tanks are equipped with this version of the gun.

The new commander and gunner sights will include either a Cassidian (Carl Zeiss) ATTICA thermal imager or a Rheinmetall Saphir. According to German developers, head injuries to drivers of Canadian tanks Leopard 2A6M CAN as a result of mine explosions in operations in Afghanistan revealed the need for a new driver system with increased removal of the exit pupil.

The two-channel (brightness enhancement / infrared) Cassidian SPECTUS driver vision system (SPECtral Technology for Unlimited Sight), already installed on the Buffel 3A1 BREM recently deployed in Afghanistan, was also selected for the A7 / A8 variants of the tank. Experimental situational awareness system Rheinmetall AZEV (Automatische Zielerfassung und Verfolgung), which has built-in functions for capturing targets, tracking and transmitting information about targets between the CICS and the combat module, is also a candidate for the A8 variant. 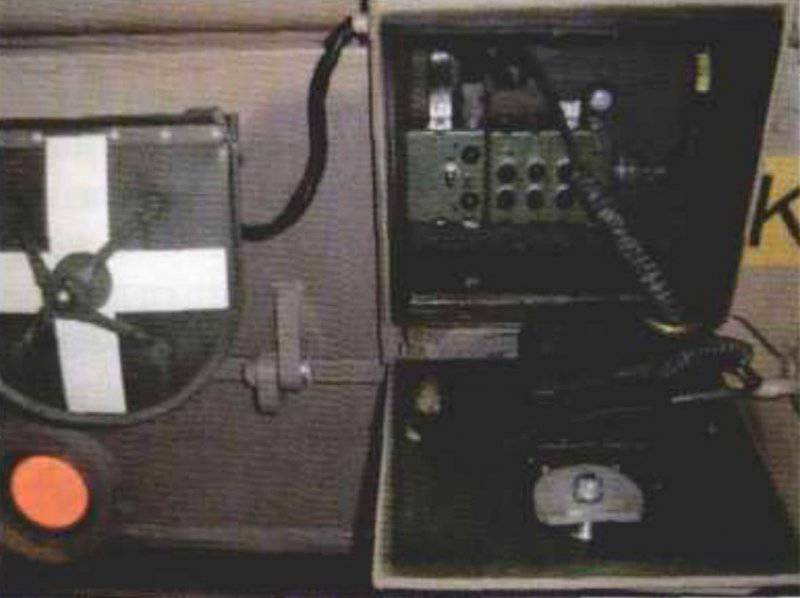 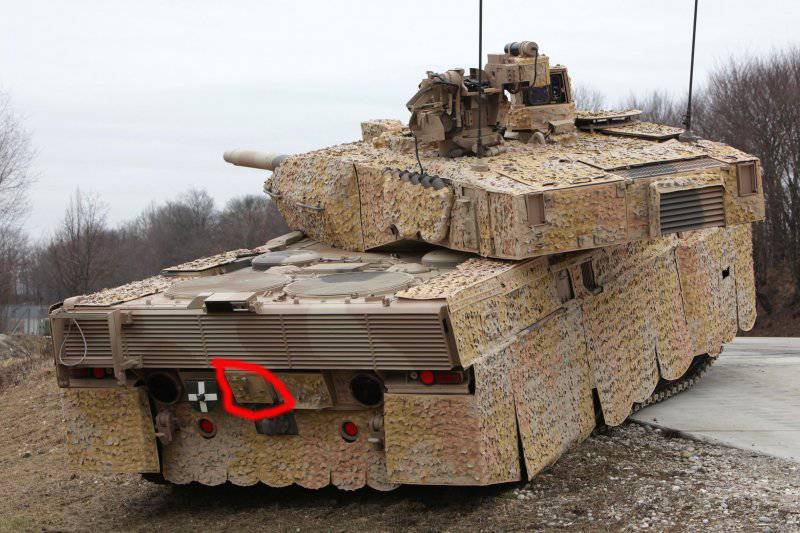 A tank phone for contacting infantry mounted in the stern of a Leopard 2A7 tank will allow infantry near the tank to directly communicate with its crew. On the bottom photo, the box in which this phone is installed is circled in red.

Another feature of the A8 will be an infantry telephone, similar to a telephone mounted on the previous generation of the German Army’s Leopard 1 tanks. Currently, the Leopard 2A6 has only two VHF transceivers (SEM80 / 90). They, as a rule, will be able to provide work in the networks of the level of a company or battalion (battle group), but without the possibility of interaction directly between individual dismounted soldiers except platoon commanders.

A long-term solution for interaction with infantry is expected to be a telephone in combination with the multichannel version of the promising digital radio station SVFuA of the German army. An interim solution would be to link one of the personal radio stations of the dismounted infantry (Thales SOLAR 400 EG UHF transceiver in the case of the German IdZ BS and Gladius systems) with a tank, as the Canadians and Danes did on their Leopard 2 tanks in Afghanistan.

It is clear that it is also necessary to take into account another lesson brought out from Afghanistan by the Canadian army, namely, the need to connect the Leopard 2 tank control system to its onboard navigation system so that the crew can use the onboard target systems of the tank to work out the exact coordinates for the third party.

Meanwhile, the lessons learned by Canadians and Danes are already included in the German Buffel Bergepanzer BREM (BPz 3A1), which has a mass of 65 tons and a width of 4,3 meter. Three vehicles were made, then they were deployed in northern Afghanistan to provide technical support for the fleet of armored vehicles of the German contingent.

In addition to the heavy dozer blade and the evacuation kit, the BPz3А1 model includes the SPECTUS driver vision system, the IFIS platform-level battle management system (the first users are already exploiting it), MPK, and improved protection against improvised explosive devices, including the remote silencer CG12. 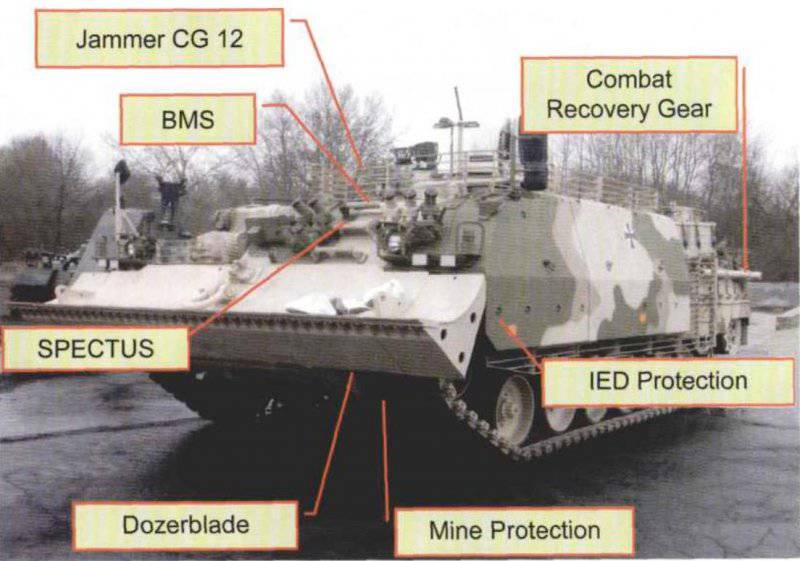 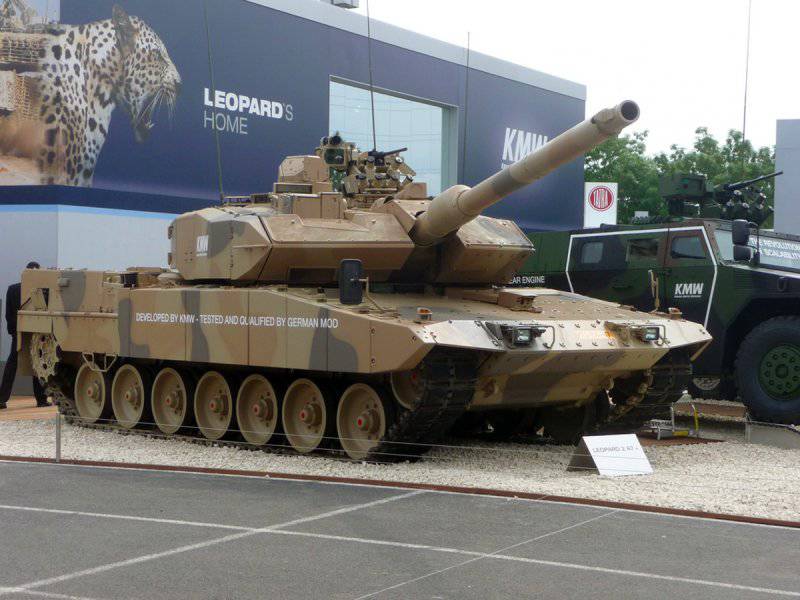 Leopard 2A7 + in all its glory