UN soldiers and police will bring order to the CARs 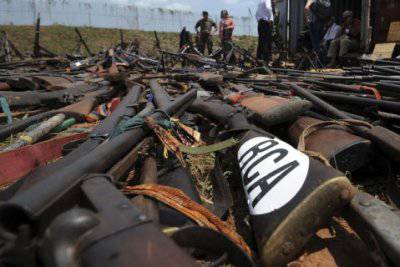 The UN Secretary-General, concerned about the prolonged interfaith enmity in the Central African Republic, issued a report with recommendations to strengthen the peacekeeping mission. 10 Thousands of soldiers and 1820 police, according to calculations by Ban Ki-moon, will be able to save the country from violence, threatening to escalate into genocide.


“The key point of the UN mission at the initial stage should be the protection of civilians,” Ban Ki-moon's report quotes Reuters. When the situation is relatively stabilized, the peacekeepers will be engaged in restoring the state system destroyed before the foundation and will take part in organizing the elections. The total UN budget, designed for peacekeeping operations, is about 8 billion dollars, said the New York Times. About a quarter of this money comes from the US administration, and the United Kingdom also pays a substantial part. Therefore, after the recommendations of Ban Ki-moon are approved by the UN Security Council, the consent of the Kingdom and the United States will be necessary. The American administration has already estimated the peacemaking operation in the CARs as costly (about 600 million dollars) and has not yet responded to the UN request for its opinion.

Interreligious conflicts in the CAR began almost a year ago, when militants of the Séléka coalition of Islamic groups headed by Michel Jotodiu captured the capital city of Bangui, forcing President Francois Bozisi to flee. Jotodia proclaimed himself head of state. However, the coming to power of the Muslim association caused protests in a country where 50% of the population profess Christianity. Christian communities created self-defense detachments, and the confrontation between two religious-ethnic groups began. During the armed clashes about 2 thousand people died, and more than 700 thousand inhabitants (approximately one out of five) had to leave their homes. According to the World Food Program, most of the CAR population (4,6 million) today eats only once a day.

On January 20, elections were held in the country, and Catherine Samba-Panza took over the post of interim president of the CAR. She said: “I call on all my children, especially the anti-Balak (militants of the Christian troops. -“ NG ”), to fold weapon and stop all the fighting. " The main task of the interim head of the CAR is to stabilize the situation in the country and prepare it for the elections (they are planned at the end of 2014 - the beginning of 2015 of the year). However, the situation in the capital city of Bangui is still tense. According to Ban Ki-moon, a country that has experienced three coups and countless uprisings since independence, is now on the way to genocide and the actual division of territory between Muslims and Christians. Thousands of Muslims fled to the northeast of Bangui, to the border with Chad, and the anti-Balak troops themselves cleaned up on religious grounds. The country is in dire need of law enforcement officials, since there is no existing judicial system there for a long time, and the police and prison guards do not pay money for months.

As foreign media have noted, in the CARs, peacekeeping operations are currently underway with 2 thousand French and about 6 thousand African soldiers. About a thousand troops in Bangui have already sent the European Union. But the impact of these forces on the “situation of violence and impunity,” according to Ban Ki-moon, was not enough. UN peacekeepers should replace African Union (MISCA), leaving only part of its soldiers with the highest level of training. As specified in the report, United Nations troops must undergo a six-month training and arrive on the territory of the Central African Republic by September 15.