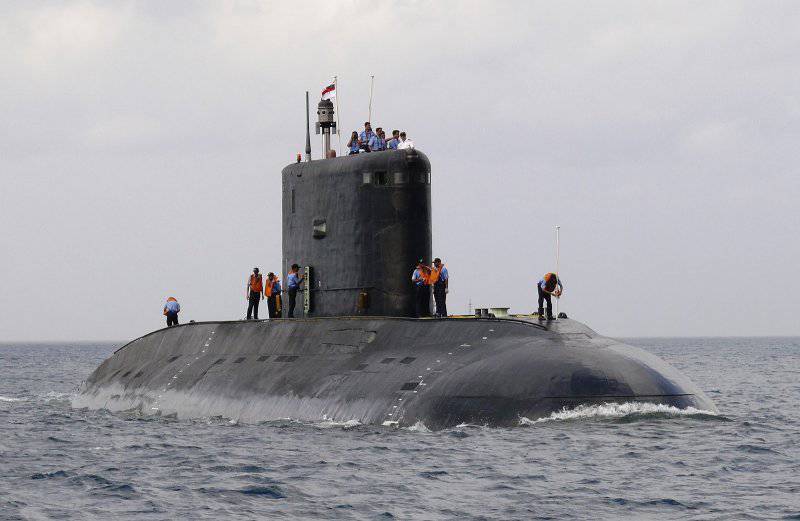 The Indian Ministry of Defense officially announced, without going into details, about the reasons for the recent state of emergency on the diesel-electric submarine Sinduratna (INS Sindhuratna), where two people were killed and seven sailors were injured. The trouble with the neighbors is not foreign to Russia: the submarines of this class were built, and then they were repaired and modernized at the Russian shipyards.


The original version of the possible leakage of hydrogen from the Xinduratny battery was not confirmed. A visual inspection carried out after the return of the submarine to the berth did not reveal the alleged damage here. Instead, burnt and burnt cable tracks were found in the living compartment of the submarine. It was they who became the cause of the deadly smoke, according to an official report of the Indian Ministry of Defense.

But why the electric cables began to smoke and ignite, the investigation has yet to figure it out.

It is hardly possible to refer to their physical deterioration, because this submarine built in 1988 at the Russian shipyard "Krasnoye Sormovo" in Nizhny Novgorod (then in Gorky), at the beginning of 2000's, underwent a scheduled repair with an upgrade in the shed of SRZ " Star"

“And with such a repair,” the RG assured at the Severodvinsk shipyard, “all cable routes should be replaced with new ones.”

The same thing, we note, was done on the aircraft carrier "Vikramaditya", which was being repaired and refitted in the interests of the Indian Navy in the neighboring "Sevmash".

Shipbuilders with experience and submariner veterans who served on such or similar submarines are inclined to the general conclusion that the cable could be ignited due to improper operation of the equipment - in particular, its power overload or some kind of negligence in carrying out ongoing repairs.

Recall that the incident occurred on February 26, when Sinduratna was submerged 80 kilometers from its base in Mumbai and tested some of the ship’s systems after a brief dock repair at its home base. After the emergency, the submarine resurfaced and returned to the pier under its own power. In the first hours it was reported that seven submariners suffered, the fate of two is unknown. A day later, the Hindustan Times, citing the command of the Indian Navy, said: these two officers from the Sinduratna crew died and their bodies "were discovered during a search and rescue operation."

The head of the combined headquarters of the Indian Navy, Admiral Devendra Kumar Joshi, who learned of the incident earlier than the others, immediately resigned. And in the government, despite the fact that the powers of the Commander-in-Chief Joshi expire only in 2015, this gesture was accepted. Such a rapid personnel decision can probably be explained by the fact that in one incomplete year this is already the third serious incident with the submarines of the Indian Navy.

Seven months ago, in August 2013-th, in the same port of Mumbai, where the injured Sinduratna is now located, an explosion occurred on board a similar submarine, Sindurakshak (INS Sindhurakshak). Then 18 military sailors died, and the boat itself sank and has not yet been raised. The most likely cause of the explosion is the operator's error when loading ammunition, which could cause their detonation.

Five months later, in January of this year, while performing training tasks, the team of the Sindhugosh DPL (INS Sindhughosh) gave a blunder - apparently, as a result of a navigation error, the submarine ran aground. No injuries or possible ship damage were reported. But all this taken together seems to have forced Admiral Joshi to resign and the command of the Indian Navy to conduct a thorough investigation of all incidents.

The Indian branch of the American company Resolve Marine Group (RMG) will lift the sunken 14 on August 2013 of the Sindurakshak submarine. He beat four other bidders in the tender, and the Indian Navy has already signed a contract with the company. At the place of the future operation, the corresponding equipment is being delivered and prepared for operation. The submarine lies at a shallow depth - only eight meters, but the upcoming operation is complicated by the fact that cruise missiles and torpedoes remain on board the Sindurakshak submarine.

Ctrl Enter
Noticed oshЫbku Highlight text and press. Ctrl + Enter
We are
New Navy ships of India: INS Kolkata and INS Kamorta"We make them so far." In India, a new state of emergency happened with a Soviet-made submarine
Military Reviewin Yandex News
Military Reviewin Google News
23 comments
Information
Dear reader, to leave comments on the publication, you must sign in.