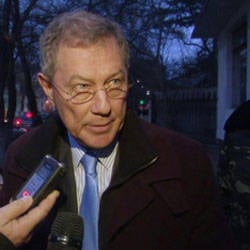 UN Special Envoy Robert Serry, who arrived in Crimea on March 9 to assess the situation on the peninsula, was forced to interrupt the mission after he was detained by armed men. According to eyewitnesses, several people in civilian and with St. George ribbons blocked the car Serry, who was about to go to a meeting with journalists, and "demanded that he go to the airport," reports UNIAN.


Surry managed to get out of the car and walk to the nearest coffee shop. The exit from the institution was immediately blocked, according to witnesses, by activists from the self-defense of the Crimea. Later, they were joined by several dozen women with Russian flags, who chanted: "Putin!" and "Russia!". The special envoy from the cafe managed to free the police who arrived at the place.

UN Deputy Secretary General Jan Eliasson, who arrived in Kiev with a similar mission, clarified that Serri managed to get to the hotel, from where he called a colleague and reported the incident. Later, the UN press service reported that the special envoy was departing from Simferopol and would soon return to Kiev to continue his mission there.

The representative of the US State Department, Jane Psaki, meanwhile, said that the observers would try to get to the territory of Crimea once again, noting that the Russian side should guarantee their quiet work. “As far as we understand, it was difficult for observers today to travel to the territory, they are going to try again. If Russia or the Russian authorities want to ensure the observance of minority rights, the admission of observers is part of the process,” the RIA quotes its statement.News".

Crimea Prime Minister Sergei Aksyonov, in turn, explained that no one invited the UN representatives to autonomy. "We did not send them an invitation, they did not warn about the arrival, the usual procedure in such cases was not followed," the prime minister commented on the situation, adding that law enforcement officers accompanying him could ensure the safety of Serry.

The UN Secretary-General plans to send another international observer to Ukraine. "I decided to send Assistant Secretary General for Human Rights Ivan Shimonovich to Kiev and the eastern part of Ukraine, including the Crimea, to look at and monitor the human rights situation there," Ban Ki-moon said on Wednesday, adding that the region needs "reduce passions".

The situation in Crimea became tense after local authorities refused to recognize the decisions of the Kiev Verkhovna Rada and the new government as legitimate. The leader of the Russian Unity Party, Sergei Aksenov, was appointed Prime Minister of Crimea, who declared that the local Russian-speaking population was in danger and asked the Russian authorities to send troops to the territory of the peninsula "to stabilize the situation." Russian President Vladimir Putin 1 March received a permit from the Federation Council, but the final decision on the deployment of troops is not accepted - the Russian side said that while planning only to monitor the situation. Kiev, meanwhile, recognized the appointment of Aksyonov as illegal, and the possible deployment of troops was regarded as a threat of a full-scale war.