March 6 2014
10
For the first time in 6 years, Sandia National Laboratories in the United States conducted a series of tests on a concrete-piercing nuclear bomb, designated B61-11. At the same time, the shooting of the deepening of the bomb into the ground (in rapid speed) was carried out. At the same time, the bomb, of course, was not equipped with a nuclear part and did not explode. The development of penetrating aviation bombs, which are also called concrete-piercing bombs, in the past few years have become interested in many countries around the world. With this weapons It is quite easy to destroy underground bunkers, command posts or warehouses of a potential enemy. Washington and Tel Aviv are most active in the development of this type of ammunition. Below is a small overview of such aerial bombs.

Tests of the B61-11 nuclear bomb were conducted in the US even on November 20 2013 of the year, but Sandia National Laboratories, which were engaged in testing, told about them only in the middle of January 2014. In the polygonal test used a bomb without a warhead. The test itself B61-11 was carried out using a special rocket trolley, which was installed on the rails. This cart was supposed to accelerate the bomb to its working speed (this parameter is classified). Before conducting the tests, the bomb and the truck were specially cooled to a temperature corresponding to the high altitude of the given ammunition.

At the same time, no data on the tests conducted by Sandia Laboratories is given. It is worth noting that tests of this kind have not been conducted in the states since October 2008. At that time, a special engine rocket cart ignited the engine before the start, one of the laboratory workers suffered severe burns as a result of this incident. Before 2008, similar tests were carried out on a regular basis. They are carried out in the framework of the US program for maintaining a nuclear arsenal in combat-ready condition, as well as extending the service life of ammunition. 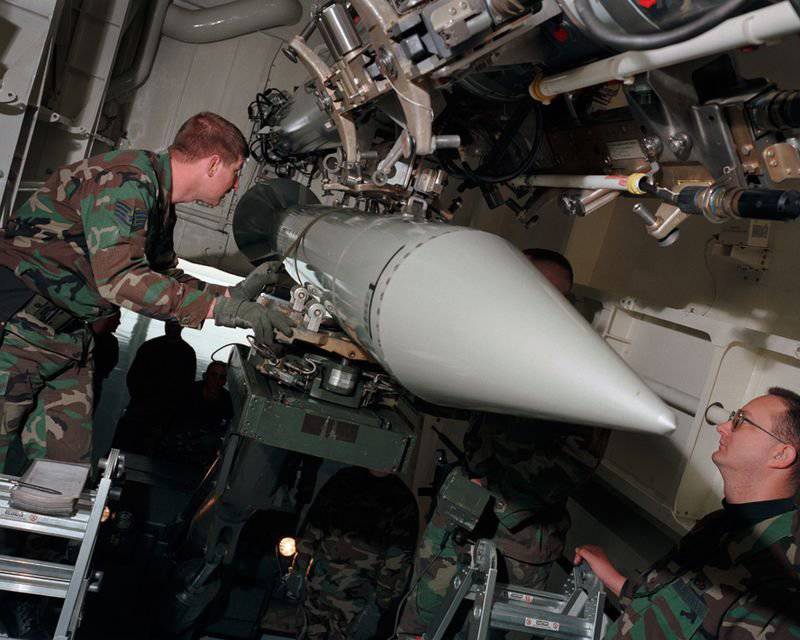 The thermo-nuclear aerial bomb B61 was developed as far back as the 1960s of the last century. Since then, it has already been made 11 of its modifications, currently in development is "Model 12". The last option - adopted - B61-11 was developed in 1997 year. The 11 modification is the anti-bunker bomb. Aircraft ammunition B61 - this variable power bombs from 10 to 340 CT. The last modification of this bomb, in fact, is the old W-61-7 charger, which was packed in a new needle-shaped case, which was previously strengthened. There is information that the enhancement was performed by using depleted uranium in the design of the bomb hull.

B61-11 is a free-falling aerial bomb (the main carrier of the strategic bomber B-2), it is designed to be dropped from a great height - 40 thousand feet (about 12 200 m). The bomb is not equipped with a braking parachute, so by the time of its collision with the ground it can gain a very high speed - up to 610 m / s. The tests carried out show that this aerial bomb is able to go deep into dry soil of medium density to a depth of 20 feet (6 m). This depth is small, but this is quite enough for the main part of the energy released during a nuclear explosion (up to 90%) to go into a seismic wave. The power of this wave should be enough to hit any well-protected underground target.

One of the most common ammunition currently in service with the US Army are specialized anti-bunker bombs with a BLU-109 / B combat unit. These munitions are in service with not only the US Air Force, but also the Air Force of Canada, France, Britain, Denmark, Belgium, Saudi Arabia, the United Arab Emirates and 7 countries of the world. The mass of the warhead is 240 kg, the entire bomb is about 907 kg. The ammunition has a steel shell with a thickness of 25,4 mm. The bomb is able to pierce reinforced concrete structures with a thickness of up to 1,8 m. At the same time, the free-fall ammunition is mainly used with target guidance systems on JDAM or Paveway III, which transform it into a guided aerial bomb - UAB. 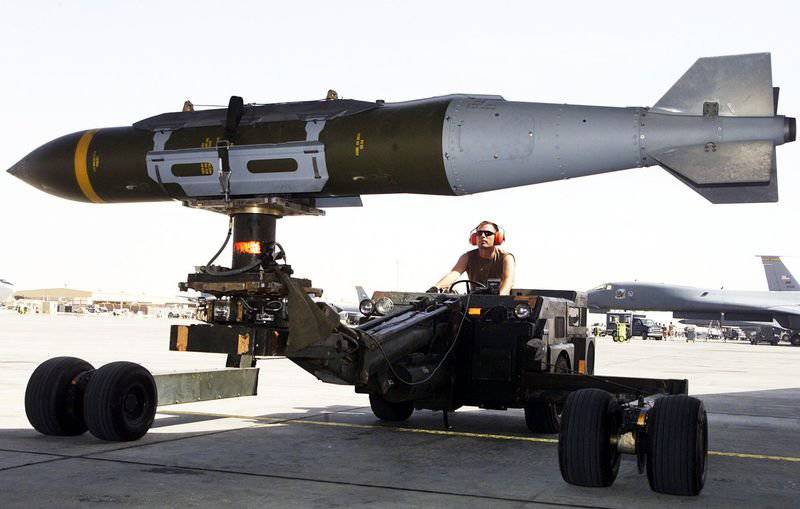 A bomb with JDAM and BLU BLU-109 / B warheads received a GBU-31 index. During tests of this munition, it was dropped from an F-16 fighter from a height of 6 thousands and 7,6 thousands of meters, respectively, at a flight speed of 0,8 M. The bombs were able to hit the aiming point, while the bombs were 43,2 and 65, respectively. According to the calculations that were made by the designers of Boeing, the UAB GBU-31, equipped with a wing, is able to provide the maximum relative distance from the discharge point to 75 km, if the discharge height is about 12 000 m, while the bomb speed will be 0,9 M.

The US Air Force has been using the GBU-57 anti-bunker since November 2011 of the year, they were put into service that year. In this case, since the adoption of the bombs on the weapons immediately began the process of their improvement. According to representatives of the Pentagon, the power of the bombs is not enough to destroy all underground bunkers, primarily Iranian ones. Work on the development and improvement of the bomb is engaged in the aircraft manufacturing corporation "Boeing".

The GBU-57 or MOP - Massive Ordnance Penetrator (MOP) is an adjustable anti-bunker bomb. The Americans specially developed this ammunition in order to combat the underground and above-ground fortifications located on the territory of the DPRK and Iran, which could be used to house nuclear facilities. The development of these bombs was carried out by Boeing specialists, starting with the 2007 year. It is reported that the total cost of the design of the MOP was 400 million dollars. 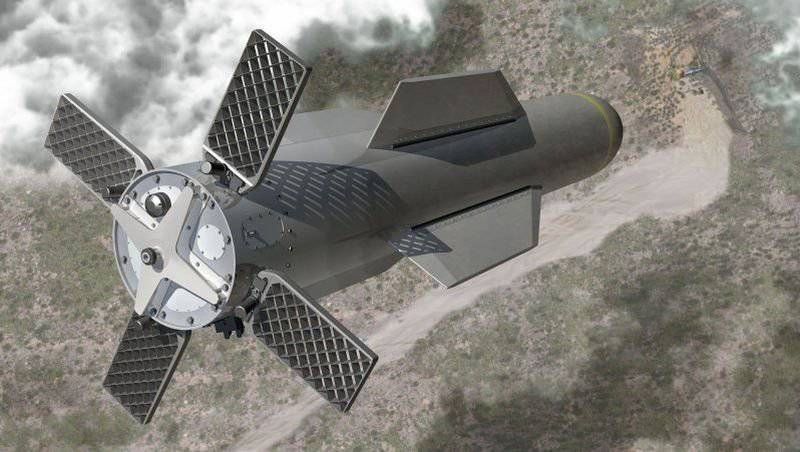 The MPA super-heavy bomb is 6 m long and weighs 13 kg. The mass of the warhead GBU-600 is 57 tons. Since this ammunition is adjustable, the bomb comes to the target by aiming at GPS coordinates. There is information that the initial version of this aircraft bomb is able to penetrate reinforced concrete up to 2,5 meters thick. At the same time, the ability to break through concrete in the improved ammunition is currently kept secret.

Currently, GBU-28 is considered one of the most effective penetrating bombs in service with the American army. It is a controlled aerial bomb, which was originally designed to destroy high-strength underground objects, for example, command posts of a potential enemy. The bomb was created in 1991 year. The UAB is made according to the aerodynamic “duck” scheme and is equipped with a wing opening in flight. It has a semi-active homing head on the target. It is an example of a successful military conversion, as it is produced using the 203-mm barrel of the M110 ACS removed from service. The weight of the bomb is almost 2,3 tons. This ammunition is able to go deep into the ground to a depth of 30 m and pierce a reinforced concrete slab with a thickness of 6 m. They decided not to dig out the ammunition that went to 30-meter depth. 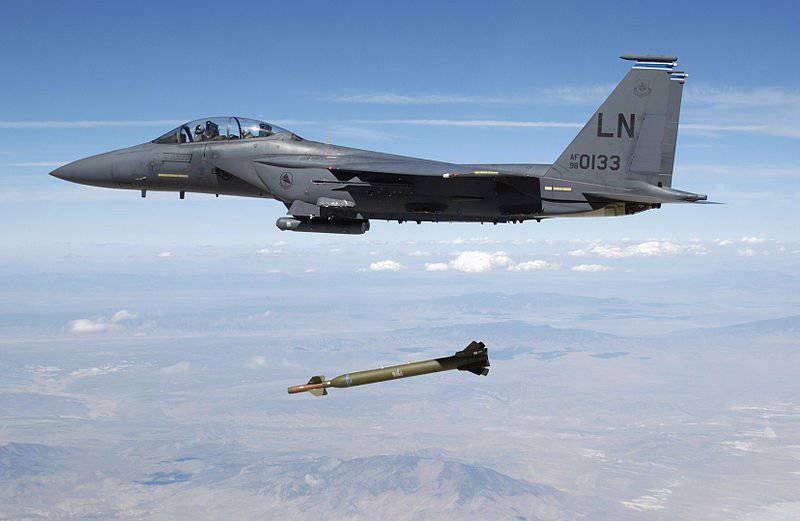 During the tests at Sandia National Laboratories in 1995, this UAB, after being dispersed on a special rocket trolley, was able to break through reinforced concrete slabs with a total thickness of 6,7 m. At the same time, the bomb retained enough kinetic energy to fly another 1,6 km order. For the ability to fight even with very thick overlaps, she received the nickname "deep throat." In military conditions, this bomb was used only twice. Two bombs were used during Operation Desert Storm to defeat Iraqi military bunkers near Baghdad. One bomb passed the target, the second successfully hit the command bunker at the al-Taji airbase, which had been repeatedly bombed, but without disabling it.

In February, 2012 introduced Israel’s own concrete bomb, the bomb was designated MPR-500. This is an ammunition caliber 500 pounds (227 kg). This bomb is able to pierce concrete floors with a thickness of up to 1 meters, or punch right up to 4-x concrete floors with a thickness of 200 mm each. With the explosion of this bomb, a very large number of fragments are formed - up to a thousand, which fly to a distance of 100 meters, effectively hitting the enemy's living force. The choice in favor of such a relatively small caliber was made due to the fact that one aircraft can carry a large number of such bombs. 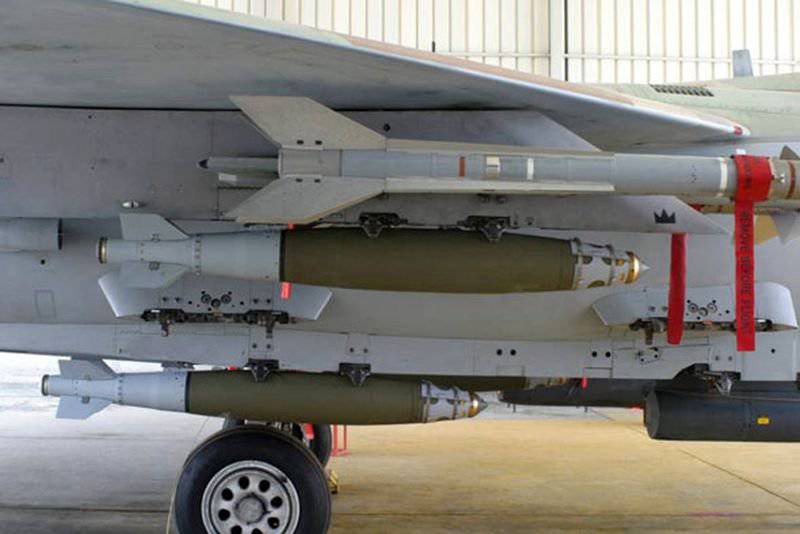 The Israeli concrete bomb is free-fall, and it can quite easily be transformed into an adjustable bomb with the help of a special kit. Ammunition Israelis developed taking into account their information about the construction in the territory of Lebanon underground fortifications and bunkers, which sometimes have inside ordinary homes or schools.

BETAB
In Russia, concrete bombs are in service with the Air Force, but do not possess such outstanding characteristics as American ammunition. Currently in our country, such bombs are designated as BetaB. These bombs are presented in three main versions: BetaB-500, BetaB-500U and BetaB-500ШП. They all differ in design, weight of the warhead and caliber. For example, the mass of BatAB500U is 510 kg. This bomb is used to destroy nuclear weapons, command and control centers, communications centers, underground ammunition depots, and reinforced concrete shelters. The bomb is able to break through reinforced concrete slabs up to 1,2 m thick or go to the ground on 3 m. The mass of the warhead of the bomb in TNT equivalent is 45 kg. It can be used from heights from 150 to 20 thousands of meters. The bomb is equipped with a stabilizing parachute. 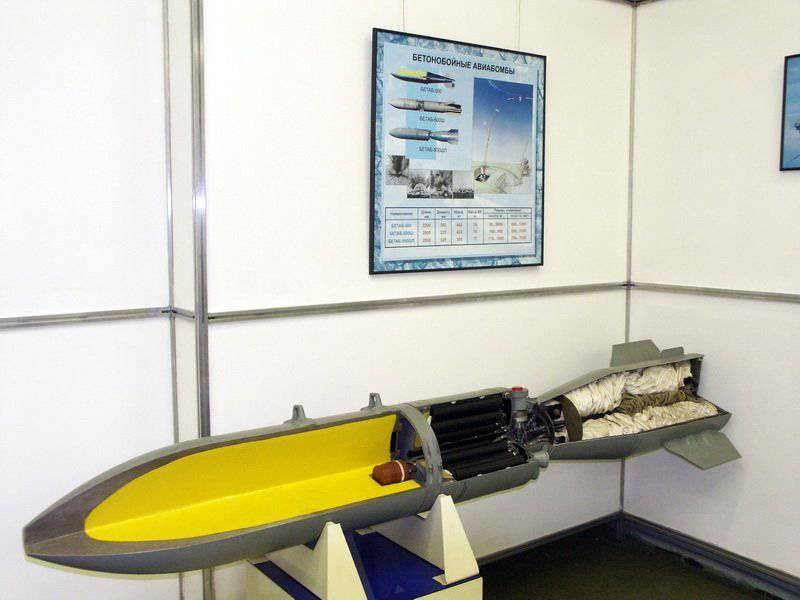 Another version of the BetaB-500ShP is equipped with a warhead with a mass of 77 kg. At the same time in the bomb used jet accelerator. First of all, this aircraft ammunition is designed to disable enemy airfields - concrete runways and taxiways. This bomb is able to penetrate armor up to 550 mm thick, reinforced concrete floors up to 1,2 m thick. One such bomb can damage up to 50 square meters of runway. In this case, with an explosion in the middle ground, it leaves behind a funnel in 4,5 m in diameter. Currently, the BetaB are in service with the Air Forces of Russia and India.