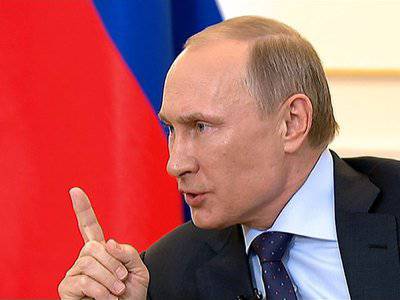 West in shock. Around the same as the Horde Khan Akhmat was, upon learning that Prince Ivan of Moscow the Third was refusing to pay tribute. Of course, Western politicians are increasingly confronted with the “willfulness” of Putin’s Russia, but in order to openly express disregard for the “Washington Regional Committee” - they have managed to wean it completely over the past twenty years.


Recently, the New York Times published, and the liberal media, including the Russian ones, rushed to comment on the statement by Chancellor Angela Merkel, who seemed to have sounded in her telephone conversation with Obama about the recent telephone conversation between the head of the FRG government and Vladimir Putin. According to the New York Times, Frau Merkel said something like the following: Putin "is in another world" and she is not sure if he has lost touch with reality.

One could be indignant, but if you look at it from the other side, then that is exactly how it is. With a small amendment: Putin (and along with Russia) have ceased to take for granted the reality created by the West and did not want to dwell in the world created by the West. For, in the eyes of Western leaders and the transnational oligarchy behind them, the only possible reality today is a world in which they - and only they - decide who should develop and die, to whom and what should belong, when and where to replace just the president loyal to the West at the next hijacker chewing on a tie. The world in which the power of law has long been replaced by the law of force, and the right to use this force also completely belongs to them - the “masters” of this world. As well as the monopoly on the truth, on the definition of who is "freedom fighters" and who are "rebels and separatists".

The recent psychosis in the West involuntarily comes to mind about the allegedly violated rights of sexual perverts in Russia who are not allowed to promote their lifestyle among children and do not register “same-sex marriages”. It would seem, why is it in the US and the EU so excited? Of course, not because of gay lovers. No, the West was shocked by the fact of disobedience. How did Russia dare to “have its own judgment”, since the decisions binding on all in Washington and Brussels have already been taken ?! That is what was perceived in the West as unheard of audacity and "loss of connection with reality." With their reality.

All traditional societies were based on the order of things natural for major cultures and religions. According to which, the priority that set the goals of the development of society was the spirituality, values ​​and world outlook characteristic of this nation. And already "below" was formed the system of production and consumption of material goods. In the 20th century, after the two world wars, the Anglo-Saxon civilization finally crushed the continental Western European civilization, forming a single "West", and turned the pyramid of values. Upstairs - the production and consumption of material goods. Derivatives from this - interpersonal relations and culture, largely became a kind of paid services. And somewhere at the very bottom - substantiating this order of things and arbitrarily interpreted "universal human values."

It is just such an inverted world that the West is trying to impose on other countries and cultures - as the only true and progressive one. Humanity is offered, in fact, a pathology that they are trying to declare a “new norm”. When imposing a new world order, the means are used very different: open intervention, organized rebellions, terrorism, economic sabotage, etc. But the goal is always the same: to transform the world into a unified “single humanity” led by a very narrow group of “owners” who have a monopoly right to information, violence and justice. Others-only technology, and the current "Maidan" Ukrainian distemper-including.

Putin has not come out of reality. He is just in OUR reality. In a half-destroyed, but still capable of restoring, the reality of a thousand-year Russian civilization, where for centuries not "being defined consciousness", but vice versa. Where, despite many years of brainwashing, the conviction that the common good is more important than personal success, a clear conscience is more important than benefit and man is not a wolf, but “friend, comrade and brother” from the consciousness of the people and has not been completely eradicated from the consciousness of the people. Including - a person living in Ukraine. Regardless of which of the branches of a single Russian people he belongs to and what kind of a single Russian language he speaks of before.

“Russians! I now appeal to all Russians - the inhabitants of Ukraine and Belarus in the Balkans are also considered Russians. Look at us and remember - they will do the same to you when you separate and give up the slack. West - chain mad dog - cling to your throat. Brothers! Remember the fate of Yugoslavia and do not let us do the same to you ... ”This kind of deathbed prophecy is attributed to Slobodan Milosevic. I do not know whether Milosevic really wrote these words while sitting in the Hague prison, but Putin clearly read them.

Confirmation of which - the actions of Russia in connection with the Ukrainian situation. The actions, which we unsuccessfully expected from the Russian authorities for more than twenty “liberal” years, have almost ceased to hope. As many more waited for them in our world disfigured by globalizers. Those who believed that not everything is being bought and sold. And that God is not in power, but in truth.