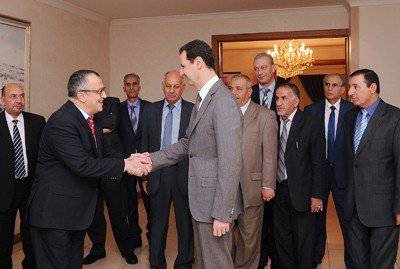 In Damascus, ATS President Bashar Al-Assad held a meeting with a friendly delegation of the Jordanian people. He thanked its members of the public who, according to him, “are striving to create effective popular movements in the inter-Arab arena to fight against the aggressive plans of the countries of the West and Israel against the peoples of the region.”


The head of state stressed that the people of Syria, despite the dire situation in which they are located because of the conspiracy, are on the side of the fraternal people of Jordan.

The people of Syria continue to take part in mass rallies in support of the heroic Syrian army. Thus, in the city of Salhad, in the province of Suwayda, thousands of people took to the streets to express their support for the Motherland and its defenders in the fight against the terror of gangs.

In addition, in Suwayda, near the huge monument of the Great Syrian Revolution (not the pseudo-revolution that is happening now with the support of Western countries, but the one that freed Syria from the semi-colonial state) a rally was held, the participants of which sharply spoke out against any foreign intervention in the SAR. They confirmed that Syria will surely triumph over all hostile actions of the forces of neo-colonialism.

In the city of Hama, a lot of workers came to the square, who confirmed their readiness to defend their homeland and resist all attempts by the United States and the West, as well as their minions in the region.

Meanwhile, the Syrian army is continuing a military operation to clean up the Yabrud area from bandits. If earlier battles were fought in the vicinity of the city of Yabrud, now, in the city itself, the army unit destroyed many terrorists along with their cars, on which heavy machine guns were attached.

In the province of Deir-ez-Zor in the east of the country, military personnel cleared from the criminal armed groups the village of Huweija Al-Mriayya.

In Aleppo, the Syrian army conducted large-scale special operations in the districts of Bustan Al-Qasr, Beni Zeid, Masaken Hanan, Al-Ameria, Salah al-Din, as well as in the Old City area. Many members of the terrorist organization Dzhebhat Al-Nusra associated with Al-Qaeda have been destroyed.
At the same time, the militants of the "opposition" continue to disrupt the malice from their failures against civilians.

3 March was fired with mortar shells in the Al-Khaldi quarter of Aleppo. Killed 7-year-old boy, as well as another local resident.
In the village of Kurmos in the province of Hama, as a result of a similar crime of militants, a woman was seriously injured and damage was caused to residential buildings.

However, it’s not a secret for anyone that many international organizations, whose opinion was “crushed by themselves” by the USA and NATO countries, are biased at the situation in Syria. Recently, UN Secretary-General Ban Ki-moon, violating proper neutrality, again accused Syria of a difficult humanitarian situation and even became sad about the fact that the world community cannot do anything about it. (At the same time, he “forgot” to call for the cessation of any support for the militants who terrorize the civilian population, because of which the very difficult humanitarian situation has developed).

On this occasion, the Syrian Ministry of Foreign Affairs issued a statement saying that the statements of the Secretary General are biased, they do not correspond to reality. “It would be more appropriate for Ban Ki-moon to confirm the UN’s desire to continue efforts to resolve the crisis through the implementation of Security Council resolutions relating to confronting terror,” the Foreign Ministry emphasized. Syria again demanded that the UN put pressure on those countries that support terrorist groups.

UAR President’s Advisor on Political and Informational Issues, Bussein Shaaban, in turn, told the Lebanese television channel Al Mayadin that the Syrian leadership will not regret any means to stop the terror and bloodshed in the country. She recalled that it was the Syrian government who immediately decided to participate in the Geneva-2 conference, while the opposing parties did everything possible to disrupt the political process. But despite this, the Syrian delegation intends to take part in the third round of talks in Geneva in order to find a political solution to the crisis.

Shaaban called on UN special envoy for Syria Lakhdar Brahimi to make a clear report to the UN Security Council, to tell about the true events at the Geneva talks and the positions of various parties on them, as well as to name those who obstructed a political settlement.

Speaking about the difficult humanitarian situation in Syria, the presidential adviser stressed that it was the government that from the very beginning of the crisis has been cooperating with international organizations such as the Red Cross and the Red Crescent. Moreover, Syria approved UN Security Council Resolution No. 2139 on the delivery of humanitarian aid to all in need. At the same time, the “opposition” militants impede the delivery of food and medicine to citizens, thereby complicating the situation.

At the same time, Russian Foreign Minister Sergei Lavrov met with Lakhdar Brahimi in Geneva, discussing the situation around the Syrian crisis. He called for the speedy continuation of the process begun in Geneva.

Syria, together with its people, continues to oppose the plans of neo-colonialism, and all healthy forces on the world stage are in favor of continuing a political settlement of the situation. And only destructive elements led by the United States continue to hinder negotiations and the peace process, supporting the militants, giving them weapon and financial assistance, as well as putting pressure on the UN and forcing the Secretary General to make anti-Syrian statements.

Ctrl Enter
Noticed oshЫbku Highlight text and press. Ctrl + Enter
We are
Bashar al-Assad: In Syria, not the “revolution” that the enemies are talking about, but the revolution of the army and the people against terroristsSyria: Americans scare themselves, and Asma Asad buys chairs
Military Reviewin Yandex News
Military Reviewin Google News
5 comments
Information
Dear reader, to leave comments on the publication, you must sign in.