"This" ice age "has already arrived" 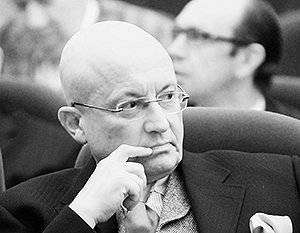 “It’s too early to talk about what sanctions could be, since the situation is unfolding, it is possible that in a month it may turn out to be completely different than it is now. Especially in the light of the progressive destabilization of Ukraine, ”political analyst Sergei Karaganov told the newspaper VIEW, commenting on Washington’s threats to impose sanctions on Moscow.


The Russian Foreign Ministry on Monday called unacceptable threats to US Secretary of State John Kerry, who attacked Moscow’s actions to protect compatriots in Ukraine.

“Without bothering to try to understand the complex processes taking place in Ukrainian society and objectively assess the situation, which continues to deteriorate after a violent seizure of power in Kiev by radical extremists, the state secretary operates on the Cold War stamps, offering to“ punish ”not those who organized the coup, and the Russian Federation ", - stated in the appeal of the Ministry of Foreign Affairs.
Recall that shortly after the decision of the Council of Federation, Secretary of State Kerry threatened Russia with economic isolation, and also stated that the United States and several other countries "are ready to completely isolate Russia" in the international arena, excluding from G8. The Russian Foreign Ministry recalled that the new Kiev regime “trampled the February 21 agreement,” signed by the foreign ministers of Germany, France and Poland, the partner countries of the United States in NATO. It is indicative that the reaction of the West to Kerry’s “hawkish” statements was far from unequivocal. The foreign ministers of Germany and Belgium Frank-Walter Steinmeier and Didier Reinders called for the preservation of Russia in G8.

The appeal of the Russian Foreign Ministry ends on a conciliatory note - they express hope in Smolensk Square that the readiness to be guided by common interests in the G8 comes to the fore. One should not overlook the fact that Moscow in the “Ukrainian issue” is supported by China, also a member of the UN Security Council.

Sergey Karaganov, dean of the faculty of world economics and world politics, honorary chairman of the presidium of the Council on Foreign and Defense Policy (SWAP), spoke about how serious the threats sounding from Washington are in an interview to the VIEW newspaper.

VIEW: Sergey Alexandrovich, how much are the demarches of the Western partners in the G-8 painful for Russia? Perhaps the West should more actively use G8 as a platform for dialogue with Moscow?

Sergei Karaganov: It seems to me that “our Western partners” were not ready for such a tough response of Russia to the series of actions that Russia regarded as a provocation. I mean that absolutely unprecedented campaign of slander that attacked Russia last year in connection with the Olympics in Sochi. This led to the fact that we in Russia (both the population and part of the elite) decided that the West decided to conduct an unfriendly policy.

Among other things, against this background, the decision on the senseless and hopeless accession of Ukraine to the association agreement with the European Union did not matter, except as a political call from Russia. Now we see that our Western colleagues are in some confusion. The Russian reaction there is abrupt, frankly.

Apparently, now you need to understand where the situation in Ukraine is leading. It leads to the collapse of this state. De facto, there apparently already does not exist a central authority — or it will disintegrate further. It will be necessary to think all together what to do about it. But for the time being we hear extremely harsh statements from the American side, less harsh statements in Europe, although the Europeans do not stint on threats. We are threatened with the "ice age".

Although, judging by the policy over the past year, Russia has the impression that this “ice age” has already arrived and, in fact, Russia has nothing to lose.
But, nevertheless, it is necessary to talk - and it is necessary to talk first of all with Germany, if she can pursue an independent policy. For me, it is clear that the old bunch of Russia - Poland - Ukraine did not work. Poland works on the interests of someone known to remember its great past that never existed.

VIEW: You mentioned the differences between the US and Germany. Can they be considered a manifestation of the refusal of the German Foreign Ministry to support the US call for the exclusion of Russia from G8?

S. K: Of course, there are disagreements between Washington and Berlin, and they will remain. But the problem is that Russia's reaction to the Ukrainian events is a shock for everyone, including the Germans. They are still trying to "swallow" these news, and it is difficult, if possible at all. I repeat, you need to understand that the main content of Western policy towards Russia over the past year and a half has been an unprecedented confrontation.

VIEW: What is the probability that differences between the Germans and the Americans over Russia will increase? Or will they soon "digest" this news and will again speak with one voice?

S. K.: The problem is that America does not speak with one voice. Now both within the European Union and within the United States there are very serious internal disagreements and contradictions. I think that a single camp in the current circumstances will not work out, although there will be attempts to create it.

VIEW: There are threats of the use of personal sanctions against those who made decisions about the possibility of using troops in Ukraine. How real are these threats?

S. K.: The decision on the use of troops was made by the Supreme Commander of the Armed Forces of Russia - President Putin. I do not know what kind of sanctions we can talk about.

VIEW: Can, for example, the EU refuse at least for a while from the Russian gas and oil? Does the US have the opportunity to drop the price of oil and gas, as it was at the end of 80?

S. K.: Rejection of energy consumption is impossible, and everyone understands this perfectly. The United States does not have the opportunity to drop oil prices, because the situation is fundamentally different. For this, as it was then, an agreement with Saudi Arabia will be needed, but I doubt that the kingdom will go for this artificial reduction - in 1980-ies the Saudis were seriously afraid that the Soviet Union would try to break through to the Indian Ocean, but now it is obvious that there is nothing like .

Perhaps we will see an attempt to slightly lower oil prices, which, however, will be clearly unprofitable for the initiators themselves - after all, China (as one of the main consumers of energy resources) and other direct competitors of the West will benefit from this decline.

But one should expect that there will be attempts at threats, bluffs. I think it will not come to serious economic sanctions, but it is clear that some symbolic steps will be taken. On the other hand, they will seek to put pressure on some individuals.

But in principle, I repeat, it’s too early to talk about what sanctions could be, since the situation unfolds, it’s possible that in two or three weeks or a month it may turn out to be completely different from what it looks like now. Especially in light of the progressive destabilization of Ukraine.

VIEW: Will there be attempts to achieve the condemnation of Russia through the UN?

S. K.: There will be attempts, but as we know, we have one blocking vote in the UN Security Council, and maybe two, if we take into account the position of China. In any case, the Security Council cannot act as an instrument of sanctions - this is the strength and weakness of this international body.

VIEW: In Kiev, talking about the possibility of closing the border with Russia. Is such a threat real, and if so, who will suffer the most from it - Ukrainians or Russians?

S. K.: Everyone will suffer, especially the residents of Ukraine itself. But I doubt the capacity of the Ukrainian elite as a whole. Of course, I don’t want the people of a fraternal country to collapse and catastrophe, in which he plunges thanks to the unscrupulous and antinational policy of this country's elite for at least the last decade.

Ctrl Enter
Noticed oshЫbku Highlight text and press. Ctrl + Enter
We are
A great interview with Sergey Lavrov: about Ukraine, Obama and IranTatarstan authorities will restore order in the republic - Sharia
Military Reviewin Yandex News
Military Reviewin Google News
103 comments
Information
Dear reader, to leave comments on the publication, you must sign in.