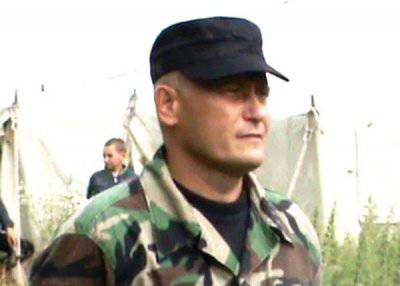 On Monday, the UK opened a case against Dmitry Yarosh, who, as you know, posted on his page an appeal to Chechen terrorists asking for help.


Our liberals and supporters of the Maidan are spreading that Yarosh is “completely unguided,” and the press service of the Right Sector has already managed to disown the scandalous statement of one of the leaders of the Maidan of Kiev.
All because of fault, they say, the machinations of anonymous hackers.

What is this “enfan terribl” of the Ukrainian revolution really thinking about? It is clear that now, when the question of the political incorporation of radicals into power, as well as the need to legitimize the new government in the West, is at stake, Yarosh will be extremely careful in his statements.

However, any person who speaks Ukrainian a little bit can get acquainted with the system of ideological views of Pan Yarosh by accessing the website of the VO “Trident”.

There, the corpus of his programmatic articles, beginning with 2009, which compiled the book “Nation and Revolution”, has been fully laid out. I took the trouble to translate the individual, the most striking passages into Russian. Without going into stylistic subtleties, we note that the ideological convictions of Yarosh and K. constitute an eclectic mix of anti-totalitarian rhetoric of Western Ukrainian underground figures (opposing the assimilation of fascism and communism) with modern anti-globalist ideas (opposition of cultural, economic and political colonization of Ukraine by Russia, the EU and the US ).

At the present time, according to Yarosh, Ukraine is “simultaneously fighting on several fronts”. The main enemy of the Ukrainian nationalists is “The Moscow Empire, it’s Russia, it’s the Russian Federation,” since “Muscovy cannot fully exist without having Ukraine in its imperial force field ... otherwise the Kremlin will never be able to revive its“ greatness "And become a competitor of the United States and China."

According to Yarosh, nationalists and separatists of all stripes should become allies in the fight against Russia's imperial ambitions: "By coordinating our actions with the Caucasian Mujahideen and other anti-Moscow forces of Russia, Ukrainians will be able to overcome the Evil Empire in a short time."

Yarosh does not hide his sincere admiration for the “effectively functioning Islamic movement of resistance of the North Caucasian peoples -“ Imarat Kavkaz ”and its leaders:“ The second anti-Moscow factor is the long-existing and effectively operating Islamic movement of resistance of the North Caucasian peoples - the Imarat Kavkaz ”. The mountains are burning under the feet of the Moscow invaders today, the youth, according to Medvedev, “massively go to the mountains” and join the rebels. Ingushetia, Dagestan, Kabardino-Balkaria have risen behind Chechnya. Supreme Amir Dokku Umarov is sworn in by Muslims not only of these republics, but of all of Russia, and, consequently, the uprising will cover all new regions of the empire. ”

Mr. Yarosh sincerely admires that “Movladi Udugov won the first Russian-Chechen war against the Kremlin with one laptop”: “In the end of the twentieth century, Mr. Movladi was able to set an example to the whole world how, using effective information resources, you can help soldiers shedding blood on the battlefield, and winning wars. "

But on whom they count and whom they see as their allies, Yarosh and his friends from among the “peaceful Ukrainian revolutionaries”: “By coordinating our actions with the Caucasian Mujahideen and other anti-Moscow forces of Russia, Ukrainians will be able to overcome the Evil Empire in a short time. The international anti-imperial front, founded in 2007 by Ukrainians, peoples of the Caucasus Emirate, Lithuanians, Poles and Turks, today is waging an information war against the forces of evil. Tomorrow he can play a decisive role in coordinating the liberation war of different nations against the Russian Federation. ”

“Our allies in the struggle for national liberation,” Yarosh fanatically convinced, “may be those European movements that are also fighting against the oppressors. Irish, Scots, Basques, Catalans, Corsicans, Flemish are potential allies of the Ukrainian liberation movement. ” In the circle of potential fighters against the enemies of the Ukrainian "revolution", Yarosh is willing to include "representatives of national minorities, including Russians, who understand the doom of the imperial path of development of their own people."

At the same time, a dismal perspective is prepared for those who disagree with the goals and objectives of the “revolution”: “Non-Ukrainians opposing the national liberation struggle of the Ukrainian people are enemies of the nation, with all the ensuing consequences.” According to Yarosh, it is necessary “to give a worthy, and sometimes asymmetrical response to any blow from Moscow”. Only then, in his opinion, “Russia, as the main enemy of Ukraine, can and should be brought to its knees”. Therefore, Ukrainian nationalists "should provide all possible assistance to the North Caucasus resistance groups."

Yarosh delicately avoids the question of the methods of "revolutionary struggle", casually mentioning that Ukrainian nationalists "are not bloodthirsty creatures," and therefore he does not at all "rule out peaceful ways of achieving the goal." This thesis, however, contradicts the following assertion of the author that “an enslaved nation has the right to any forms and methods of struggle against the oppressors”, including “weapons in hand". He speaks more frankly in one of his last agitations: “We are conducting guerrilla raids in Kiev. Under the feet of the invaders should burn the ground. We arrange hunting for representatives of the bandit "Berkut", "aunts", deputies of "regionals", and communists.

The main recipient of the appeals of Yarosh and his colleagues in the "Right Sector" is the youth. That it is the "main personnel base of the revolution," "the main driving force."

Playing on the youth subculture, a sense of community and dedication to the common cause, Yarosh introduces the image of a “warrior-crusader who becomes a fight against evil”. Hence, the semi-mystical attitude towards the organizational structure of “Trizub” as a kind of “black order” of the SS, created in turn in the style of medieval knightly orders (mainly the Templars).

The non-party order in the scholastic fantasies of Yarosh serves as a "consolidating factor in Ukrainian society," since it pursues a "nation-state, not selfish policy" and works "to expand the national front." Any “order” needs not only “cannon fodder” in the form of ordinary militants, but also experienced military professionals. Therefore, Yarosh pays special attention to the issue of attracting "patriotic officers", since "people in uniform are the golden fund of the nation."

Another task - the spiritual nourishment of the "order" - is assigned to the so-called "chaplains." Recall that the institute of military chaplains of the Greek Catholic Church served Ukrainian collaborationism. The examples of the two odious military formations that were in the service of the German Wehrmacht and staffed by the OUN troops - the Nachtigall (“Nightingale”) battalion and the SS division “Galicia” - are very eloquent.

According to Yarosh, the new "chaplains" will lead the "Order" to fight with another enemy of the Ukrainian nation - the ROC, which "for centuries has been in the vanguard of the imperial regiments to conquer Ukrainian lands" and is still a "spiritual satrap ... of the freedom-loving Christian the spirit of the Ukrainian people. "

At the end of the book, the author, speaking of the future of his country, loses the pathos of the fiery fighter for the national idea, falling for the banal Nazi and Ku-Klus-Clan slogans: "Great Ukraine sees itself not as a tyrant of the world, but as an international arbiter, helmsman, leader of the white race" .

Anyone who doubts the accuracy of the above, I recommend to get acquainted with the original. Read and draw conclusions.

Of course, I want to believe that such marginal politicians are still in the minority today. Yarosh come and go, but the Ukrainian people remain. But there are no illusions about the “error”, “hacker attack”, “random placement”.

Ctrl Enter
Noticed oshЫbku Highlight text and press. Ctrl + Enter
We are
Strategy and tactics of the "Right Sector"Russian revolution: the debunking of myths and nontrivial view
Military Reviewin Yandex News
Military Reviewin Google News
128 comments
Information
Dear reader, to leave comments on the publication, you must sign in.