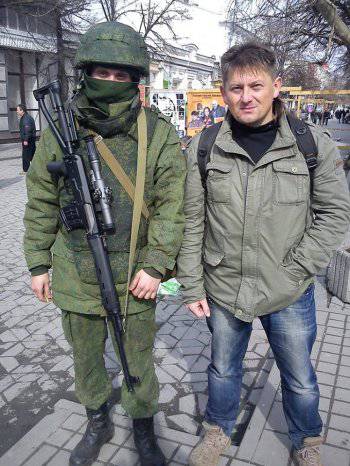 Time is a relative category. You are convinced of Einstein’s rightness once again when you understand that only six days have passed since the beginning of the transformation of Crimea into a separate state. But it seems that an eternity has passed, the events were so compressed. The emotional intensity was so great that people in the literal sense of the word went crazy after watching releases News. They believed in Russian Tanks near Brovary, in the third world war and the near end of the world. As a result, Ukraine was split in the literal and figurative sense.


The lull came suddenly when the Russian Federation announced the end of military exercises. Apparently, the first stage of the operation “Russian Spring” has ended. Let us sum up the preliminary results, since the “zomboyaschik” is choking on conflicting information: according to one version, Ukraine won a convincing victory over the Russian Federation thanks to the strong-willed position of the speaker-president and the courageous, extremely decisive temporary prime minister Arseny, on the other - “separatists” and “Russian militants with tattoos "Airborne" breakthrough groups of 5-6 people across the eastern Ukrainian-Russian border, to sow panic and organize unrest in the eastern regions of Ukraine. But the border, according to the State Border Service, is closed. Therefore, no one controls anything.

First, bringing the Ukrainian army into a state of full combat readiness more than vividly demonstrated that we have no army at all. Separate episodes with a mysterious redeployment of some units only confirm this thesis.

Secondly, the general mobilization announced by the provisional leadership of Ukraine turned out to be a complete bluff, since the military registration and enlistment offices did not understand at all who to call, where to send and where to get funds for such events.

Thirdly, the spectacle of the country's leadership, frightened to death, especially Mr. Turchinov, who is characteristic of stepping on his feet (you know), could have been comical, if everything had not been so serious. The senseless and fussy throwings of the speaker and the temporary prime minister testified to a complete lack of understanding of the situation. Either they increased their combat readiness, they declared that the army was deliberately collapsed, they sent a parliamentary delegation to the Crimea, they were going to impose a state of emergency, and then they turned to the UN and the wider international community.

Fourthly, with a fright they introduced a real oligarch in the eastern regions of the country. It was clear to the naked eye that the institution of governors that existed until recently was no longer able to provide control over the economic and political situation. The militia is demoralized and, as 1 March events show (raising Russian flags over regional councils in Lugansk, Donetsk, Kharkov, Nikolaev, Kherson, Kerch, Odessa), tries not to interfere with what is happening. Therefore, on the initiative of Yulia Tymoshenko, it was proposed to head the rebellious regions to the oligarchs. Agreed Igor Kolomoisky and Sergei Taruta. Both businessmen are more than close to Yulia Vladimirovna. Just for fun: separation of business from government is the basic principle of "European democracy." Already so much has been said on this score by the opposition, which has become the power, and I don’t want to repeat. But when they realized that they could not keep the situation on the ground, they obligingly gave the business to deal with the situation. Naturally, under certain conditions. What kind? One can easily assume, however, note that not a single honest and “democratic” media speaks about this. As if water (or not water) was poured into the mouth. Maybe censorship has been introduced on TV channels and “journalists” should be protected from the arbitrariness of the new temporary government? Oligarchs instead of governors - the next, strikingly idiotic step of the regime. Classic illustration of the policy of double standards.

Fifth, in six days all the structures of the central government in Crimea and Sevastopol were completely dismantled. And without a shot. Polite soldiers who moved around the peninsula mentally traumatized the racially correct Ukrainians. Pay attention to the following fact: even the Crimean Tatars, who were more than active at the beginning of events in dismantling the Ukrainian statehood, behaved meekly and quietly. Brigades of ultra-radicals with a permanent base in Kiev never reached the Crimea.

And finally, the most important thing: the March 1 uprising in the eastern regions of Ukraine has become unprecedented in the newest stories Of Ukraine. Unlike the passionate western region, there have never been major political unrest in the east. For almost two decades, people believed that the politicians they elect would be able to solve their problems in Kiev. They obediently voted for slogans on granting Russian the status of the state language, for appeals to stability and a return to a normal, apolitical life. Even despite the fact that they are constantly deceived. First Kuchma, then Yanukovych. And then there was a tectonic political breakdown of this stereotype, the consequences of which in Kiev are not yet fully represented. When the Party of Regions in its entirety fell under the new power as a cheap political prostitute (which it was), when the president turned out to be a freak, anxious only about their security, they were left alone with their problems. In the Rada nobody represents their interests. Traitors of the Motherland (PR) vying with one another are trying to oblige Freedom and BYuT because they are simply afraid of getting pesti. They publish touching press releases acknowledging that they were wrong, were mistaken and therefore repent. On the Communists in general can not speak. These fighters for workers' rights are huddled in burrows and whine, complaining about the seizure of the office. Yes, they definitely need to be banned, because who needs the necessary scum? By the way, the "regionals" still want to hold a "party congress." Elect a new leader. Judging by how fussing Tigipko, the Komsomol leader wants to lead the "updated PR." It may well be. But it will not work. During the uprising, new leaders appeared in Donetsk, Kharkov, Nikolaev, and Kherson.

People chant "Russia" because a handful of sneaky boors betrayed their interests. And no oligarchs are able to control this process. Including Kernes and Dobkin, who are now trying to pretend to be true patriots. Now let's mark the main trends of March.

First, the temporary government will try to do everything possible to eliminate the new statehood of the Crimea. For them, this is not just a pain in the ass, but a giant metal rod in the same place. The decisions of the courts that cancel Aksenov’s appointments as prime minister of the Republic of Crimea, as well as the resubmission of all security agencies to him, have already gone. Appeals to the States and the EU come in abundant flow: help, eliminate, they will destroy us. When they wake up a little, direct provocative actions will begin. Nothing but Maidan, a temporary power can not come up. But Crimean Tatars alone are not enough for such an event. A beautiful informational occasion is needed. Therefore, Yugoslav-style provocations will begin: “the shooting of civilians” by the Russian military, the atrocities of the “Russian militants” who kill the patriots of Ukraine, the mass protests of the “true Crimeans” against the occupation of the Ukrainian peninsula, the arming of the “separatists”. Information war against the Crimea is already underway. The abandoned during the acute phase of the events of the Ukrainian military, whose needs the Supreme Commander did not even remember, while I was diapers, today will make the heroes of Ukraine. It is completely in the spirit of the current government. Crimea today is a mirror image of events in Kiev. He plays, sorry for the comparison, the role of Galicia, because it is an example of real perseverance and strength of mind. An example for those who are on his path to freedom.

Secondly, the Russian leadership clearly identified the next stage of the operation: economic. Immediately after the press conference of Vladimir Putin, who openly mocked more than a nervous reaction to events in Ukraine from the United States, the head of Gazprom spoke. His message was more than expected: Kiev’s debts for gas amount to one and a half billion dollars. Plus, the discount on energy supplies from Russia has not been valid since April. Naturally, the government is not able to repay the debt. Therefore, difficult economic times begin for Ukraine. In addition, the West is in no hurry to give money. When the situation is uncontrollable, there is no sense in pouring loot into a rapidly collapsing economy. Therefore, the government will bluff. Arseny is already talking about the hours that remained before receiving massive financial assistance. And to speed up the process, the prime minister officially offered to sell Naftogaz of Ukraine. That is, the gas transportation system of Ukraine is “the wealth of the Ukrainian people” according to the classification of Yulia Tymoshenko.

Thirdly, the temporary government is in panic afraid of a series of referendums to be held in the spring in the Crimea and in the east of the country. In Crimea, the referendum may take place on March 10. Therefore, the entire punitive resource will be thrown at the suppression of popular will. The “little problem” lies in the fact that Putin warned about the free will of the subjects who want to join the Russian Federation. And the law has already been adopted. The first will be, as always, the Crimea.

Fourth, Yulia Tymoshenko decided to postpone the presidential election campaign. She feels: in the current situation it is pointless to hold elections. Russia made it clear that it did not recognize the president elected without taking into account the peace agreement, which the new government had long forgotten. The Republic of Crimea, as everyone knows, will elect its president. In the east, oligarchic governors do not guarantee her votes. And it is not clear how this election will end. Therefore, the activity of the interim government is prolonged at least until the end of the year or until the first eastern breakthrough. It is not excluded that Yatsenyuk will be indicatively "shot" as having failed in his role as temporary prime minister, and this place will be offered to Klitschko, since he no longer understands where he is and what he is doing.

Ctrl Enter
Noticed oshЫbku Highlight text and press. Ctrl + Enter
We are
The soldier has an eternity aheadWhat you didn't want to know about England
Military Reviewin Yandex News
Military Reviewin Google News
174 comments
Information
Dear reader, to leave comments on the publication, you must sign in.