Profpatrioty - for the motherland. For yourself or for yourself? 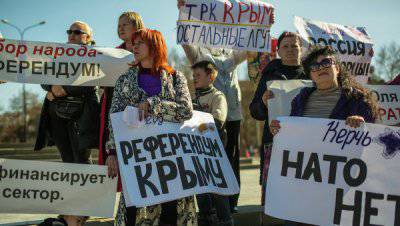 Today, almost no one doubts that Ukraine such as it was before the February 22 coup, 2014, will be gone. And what will it be? This question aroused the unstable minds of the expert community and beckoned for profit - they can pay for estimates and forecasts. And if these forecasts are reflected as an integral “component” of individual politicians (they say, nothing will happen without them, everything will be ashes), then the remuneration will increase exponentially: the more necessary the “character” is depicted, the more generous it is. Pays, of course. This is the basis of image-making.


So they built all the "bright images" of Ukrainian politics over the past 20 over the years. Well, as well as from whom they built, so they built the country. If initially the source material with a delicate and defective at the genetic level, then you can fashion a beautiful facade with an image of it. But inside he was as rotten as ever. And rot always comes out later, flooding the country with a stench. And the blood ...

But if we talk about blood, then this is so, by the way, it was necessary and the recent situation inspired. However, in all other respects, the scheme and its essence remain, alas, unchanged. The pillars of the state, which should be, at least, at least granite, mold out, sorry, products of such recycling that it is difficult to analyze them without a gas mask. But, alas, it is necessary ...

Well, if only because the above changes are coming up in the country. We will talk about them. The situation that is now emerging in the south-east of Ukraine is simply called: creeping autonomization or de-facto federalization of Ukraine. And in the Crimea, which in unitary Ukraine already possessed the status of autonomy, this autonomy is being filled with real content. And political, and economic, and, as it happened, the military (in fact, the armed forces of the autonomy are created). Some of this status of autonomy provided for de jure, something is not, and therefore the “necessary” is now also getting de facto. But what happened in the Crimea clearly means: he will never return to the composition of Ukraine in its previous form.
Here, for example, is a schematic, but rather complete analysis of the Crimean referendum on its new status, scheduled for March 30 of this year. Independent lawyers thought about the possible consequences. And that's what they did. Do you know how the question of the coming all-Crimean referendum sounds? It sounds like this: “The Autonomous Republic of Crimea has state independence and is a part of Ukraine on the basis of contracts and agreements?”. Answers - for or against. And possible options for what could be.

1. If you are in charge of “for”, this implies: The Autonomous Republic of Crimea has state independence and is part of Ukraine on the basis of treaties and agreements (it’s necessary to write the legislative basis for the membership of a separate state within Ukraine. As you write, it will be, and Ukraine should have an appropriate legal framework for such an option, but it is not).

2. If you answer “against”, this implies: The Autonomous Republic of Crimea does not have state independence and is not part of Ukraine on the basis of treaties and agreements
(that is, it is part of some other state. I wonder what?).

1. The Autonomous Republic of Crimea does not have state independence and is part of Ukraine on the basis of contracts and agreements (that is, leave everything as it is).

2. The Autonomous Republic of Crimea has state independence and is not part of Ukraine on the basis of treaties and agreements (that is, complete independence).

And in Crimea, of the indicated options for changing one’s status and fate, something will work out. Except, of course, the first of the missing options - leave everything as it is. The Crimea has already “gorged on” life in Ukraine, it has already been said there: “Crimea is either Ukrainian or deserted”. And now, it seems, they are ready to proceed with either Ukrainization or desertification. Crimeans do not agree with this. And behind them is all the power of today's Putin Russia. Yes, at his press conference, entirely devoted to Ukraine, Russian President Vladimir Putin said that he was not considering the issue of Crimea joining Russia. But in the trouble of his people will not leave. Well, what could he say if the people of Crimea have not asked him about it yet? This is the first.
Secondly, today many are sure: if Ukraine wants to preserve its territorial integrity at least formally, then this process of federalization should be provided for in the new Constitution, which they plan to write. And in general, in a new political discourse, federalization should not be viewed as separatism, but as a potential, if you will, potential new form of government based on decentralization of political and administrative power and the financial and budgetary system. That is, the simplest and most obvious, as they say, on the surface - the election of local leaders should be supported by fiscal federalism - the redistribution of tax flows in favor of the regions. In what form the administrative-political reorganization of Ukraine will occur (cultural autonomy, federation or confederation) will depend on the level of trust in the authors of the Constitution and the degree of participation of regional representatives in the constitutional process as not extras, but full-fledged co-authors.

Third, federalization (even in the form of cultural autonomy) in Ukraine has many enemies, who have one common name - “professional patriots”. Those who want for the love of the Motherland to receive or salary, or dividends from the use of one large national "trough". First of all, these are politicians, government officials and their various servants in the person of the Ukrainian-speaking national-patriotic humanitarian intelligentsia or the current Maidan fighters who are infected with nationalism, united either in “people's self-defense” or in the newly-minted “Right Sector”, which has already announced that "Takes responsibility for the continuation of the Ukrainian revolution."

And their motives are clear and simple to primitivism. Like all that is born of vanity and self-interest. Politicians and bureaucrats are prestigious to be the leaders of a large state and represent it in the international arena, flaunting regalia and status. It is important for Ukrainian-speaking humanitarian intelligentsia to be idols of their own - Ukrainian-centric - world and thus oust Russian-speaking competitors from it, who are often more talented and have a larger area of ​​distribution (thanks to the language) not only in Ukraine, but also in Russia and in the whole Russian-speaking world. These are not taken by talent, but by the throat and prohibitive-repressive violence. But the militants, allegedly speaking for the "Ukrainian Ukraine", it is advantageous to receive money and status for the further Ukrainization of the "unconscious" south-east of the country and the Crimea. Having taken the clubs and the Molotov cocktails, they are unlikely to return to any other productive work voluntarily. But the post-Maid Ukraine does not have the strength to force them to do this. So they offer themselves to the authorities as the “staplers” of the country. And they are unlikely to regret anyone in their path. It is from these regions that the rescue regions are being sought in federalization, offering today the holding of local and state-wide referendums on the form of government. In favor of federalization, naturally.
And there is another powerful type of fans of unitary Ukraine - the so-called oligarchs. The oligarchs have similar economic interests in all regions without exception. It is profitable for them to “milk” the whole country for their own moshny, and not for individual regions where they will also have to pay taxes. This benefit and dictates their political "love to food nenky". And the “self-defense of the Maidan”, “Right Sector”, and “Freedom” are in fact not only the allies of the oligarchs, but also their tools and mechanisms for the preservation of unitary Ukraine.

I once wrote that if we agree with the fact that not only the Crimea, but the whole country is no longer there, then hypothetically there are only three ways for Ukraine’s development. First: the mentioned federalization, based on varying degrees of decentralization of power. The second: the opposition of the regions with the center and among themselves. Up to civil war and the collapse of the country into separate enclaves with their subordination to other neighboring states or becoming independent recognized states in varying degrees. Third: the internal occupation is either by zapadentsy skidnyakov, or vice versa - by skhidnyakami zapadentsev. And Ukraine’s neighbors both in the west and in the northeast will play a very important role in this.

And today it is already clear: the first option is beneficial to Russia. The third is for the West. That is why all the “staplers” and opponents of federalization are only tools from geopolitical customers in the West (especially in the US among European “hawks”), who need not just a single “big” Ukraine, but “sharpened” against Russia. They are well aware that the federal lands of the south-east of Ukraine will hardly ever be able to grind against Russia. But in unitary Ukraine it is possible to reformat consciousness by force.

And that's surprising. Today, many offer all sorts of options for saving the country. And among them are extremely tricky - from the "staplers", many of whom stood behind the Maidan ordered from outside and the coup d'état that followed. For example, just recently, such a cunning plan was presented by experts of the Institute of Strategic Studies (CII) “New Ukraine”, created for modest savings by Sergey Levochkin, former head of the Presidential Administration, who was flooded as one of the initiators of the Maidan. And these experts, among other humanitarian and distracting verbal crap, propose "a temporary moratorium on holding local referendums until extraordinary presidential and parliamentary elections and the elaboration of the relevant legislative framework." That is, they want to curb the referendum path of federalization. And then how it will turn out: either the regions will achieve their goal, or the “Right Sector” and other neo-Nazis will occupy them and beat them out of their heads with cudgels ...

But as they say, the process has begun. And internal feuds have already led to a deplorable result: Ukraine’s full subjectivity in the international arena must be forgotten. Maybe forever. Participants in the current coup d'état have to be congratulated on “success”: for which they fought, Ukraine seems to have fallen for that ...