March 6 2014
103
In Russia, experts in the field of economics do not cease to declare that any financial assistance from Russia to the new Ukrainian “authorities” would be akin to throwing bills into a burning fire. And without taking into account important economic laws, it is clear that Russia is clearly not interested in sponsoring those people who were in the wake of ultranationalist speeches and pogroms in government offices. Such sponsorship will look just counterproductive for the Russian Federation.


It is quite another thing to build financial and economic interactions not with Kiev's non-legitimacy, but with those Ukrainian regions that are not only ready to make close contacts with Russia, but also with Russia who are interested in economic contacts with Russia. If Kiev openly declares that only its association with the European Union is its main task, it means that Russia will have to cooperate in Ukraine with those who express other ideas. As they say, nothing personally - only business. One of those regions of Ukraine that support the idea of ​​developing close ties with Russia is the Autonomous Republic of Crimea. 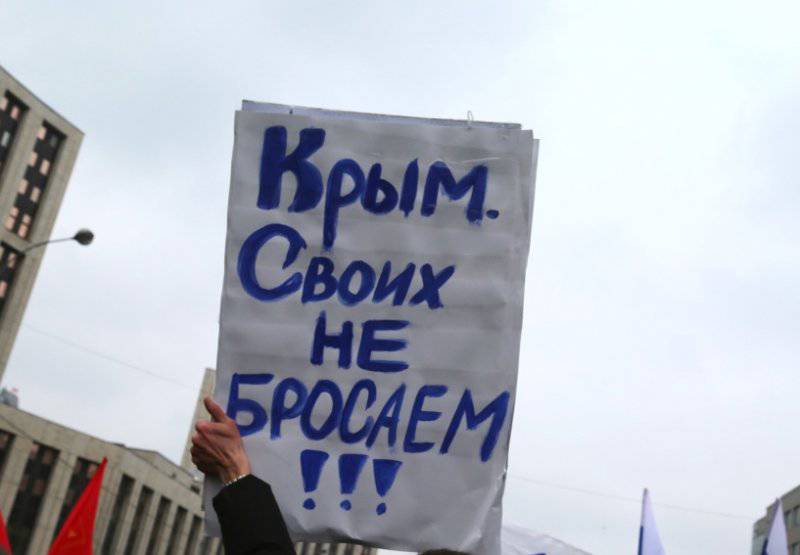 It should be noted that the government of autonomy has recently officially appealed to the Russian authorities with a request to provide all possible financial assistance to the peninsula, which, at least economically, has lately made the central authorities in Kiev an island.

According to Russian President Vladimir Putin, financial assistance to Crimea may be rendered in the near future. It was the topic of providing economic assistance to the ARC that was devoted to one of the segments of the meeting of the Russian government, which was held by Dmitry Medvedev.

Among the issues that were discussed at the meeting, was a shortage of the Crimean budget, as well as the development of transport infrastructure between the Russian Federation and the Crimean peninsula.
Speaking at the meeting, Finance Minister Anton Siluanov said that he had met with a colleague from the Crimean autonomy. The head of the Ministry of Finance of the ARC during this meeting noted that today the budget deficit in the country is 10 billion hryvnia. If we take into account the current hryvnia exchange rate in relation to the Russian ruble, then it is about 37 billion rubles (a little more than 1 billion dollars).

Financial assistance to the Crimea can total a total of 6 billions of dollars, of which 1 billion is the amount needed to pay off budget debts, and the remaining 5 billions are direct Russian investments in the region. Such parameters of assistance today are spoken both in the Russian government and in the country's parliament. In particular, the Vice-Speaker of the Federation Council Yevgeny Bushmin said that not only financial assistance would be provided directly to the Crimea through the Ministry of Finance, but also humanitarian assistance. According to him, the first cars with humanitarian aid from Russia went to the Crimea.

If we talk about investment projects in which the Russian Federation is going to take part in the Crimea in the near future, then one of the most ambitious projects is the construction of a bridge (according to other data, a tunnel) that can connect the Taman and Crimea peninsulas (Russia and the Crimean autonomy). Dmitry Medvedev also spoke about the construction of this bridge at a meeting with deputy prime ministers:

Both Russia and Ukraine are interested in reliable and inexpensive transport communication between the Taman peninsula and the Crimea, as well as in the development of additional channels for trade and joint investment projects.

At the same time, the head of the Russian cabinet of ministers notes that the decision to join Taman with the Crimea was made about three months ago - in December 2013 of the year. On the basis of this decision, options are being considered on how exactly the automobile communication through the Kerch Strait will be established. As noted above, the construction of either a bridge or a tunnel is considered as a project.

The news that Russia at the level of the central authorities, as well as at the regional level (for example, the agreement of cooperation was signed by the authorities of the Autonomous Republic of Crimea and Tatarstan) is going to provide assistance to the Crimea, with undisguised painful reaction to the self-proclaimed authorities in Kiev. One of these new “rulers” of Ukraine was a man who called himself Energy Minister - Yuriy Prodan. He, arguing that the Crimea could acquire an autonomous power supply system with the help of Russia, said that the peninsula in this case would be threatened with man-made disasters and even a quote: “with all the ensuing consequences” ... Mr. Prodan’s words somehow very much resemble direct threats with a clear terrorist smell. Isn’t it sold that these “man-made disasters” are going to be organized in Crimea? If so, then Crimeans obviously want to talk with the “Minister of Energy” more, let's say, tightly.

The message of the Kiev “authorities” is approximately the same: we don’t have anything to provide financial support to the regions, and there is hardly a desire, but we also don’t intend to allow the regions to participate in investment projects with Russia ... We’re talking association with the EU.

Well, and associate as much as you like - you can at least in the office, even with hundreds of the “Right Sector”, with breadcrumbs from Nuland and promises from Kerry - please! But just be kind and take an alternative opinion of your fellow citizens. Or do circulars from the United States not allow for this opinion? .. If so, then the opinion of these citizens is ready to be taken into account by Russia.

PS In a number of Ukrainian publications financial and humanitarian assistance to the Crimea from Russia is called the support of separatism on the peninsula. Aha - a project for the construction of a bridge and a column of several dozen trucks with blankets, fuel and medicines - support for separatism ... And we naively thought that the enslaving agreements of the new "authorities" with the EU, the IMF, the thoughtless laws on the status of languages , calls Yarosh send to the south and east of the "train of friendship" with thugs in cars, killing policemen, desecrating churches, torchlight processions of thugs with Nazi symbols on the main streets, the initiative to complete the "non-bloc" status of Ukraine with possible Country's departure to NATO ...

So, if Kiev self-proclaims have a desire to see the separatists, then let them look in the mirror ...

Ctrl Enter
Noticed oshЫbku Highlight text and press. Ctrl + Enter
We are
Situational analysis of the death of the MH17 flight (Malaysian Boeing 777), made on the basis of engineering analysis from 15.08.2014Results of the week. “You are already indebted to the sea: neither the bottom nor the coast”
Military Reviewin Yandex News
Military Reviewin Google News
103 comments
Information
Dear reader, to leave comments on the publication, you must sign in.