US media talk about fascist power in Ukraine 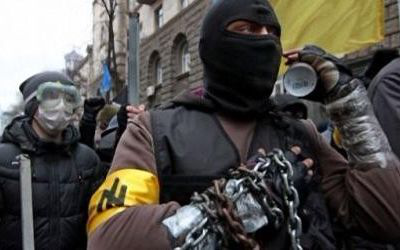 The terrible role of the "Right Sector", whose leadership entered the new government in the role of the official "siloviki" was reported by the US online publication Daily Beast. As an example, the media cited one of the leaders of the group, Alexander Muzychko and his associates, who said that the “Right Sector” would always be armed.


Also, the publication emphasizes the leading role of the "Right Sector" in the power, and somewhere in the bloody seizure of power in Ukraine and the overthrow of Yanukovich.

By the way, the same media notes that for the first time in stories In Europe, the far right has received such power - despite the fact that their agenda and statements, actions and program are incompatible with democratic norms.

The portal emphasizes that the “Right Sector” even in rhetoric uses the terms “homodictatorship”, “liberal totalitarianism”, “degeneracy”. As a result, Daily Breast comes to the conclusion that although the “Right Sector” is a powerful street power, it should not be allowed into the power.

It’s just too late - his head, Dmitry Yarosh, has already been appointed to the Security Council of the “new Ukraine” and the head of the State Department, John Kerry, will have to press his hand. Especially it will look beautiful after Yarosh called on the Russians to destroy power in Moscow, but the main thing is that Umarov addressed the USA called "one of the main terrorists of the world" for terrorist attacks in Russia. Then, it is true - after the statement of the head of Chechnya Kadyrov about issuing Yarosh “a ticket to Umarov” (as we know, he was already killed) - Yarosh and his colleagues began to justify themselves, saying that it was “hacking” and they did not write this. That's just the administration of the social network VKontakte, where the calls were posted, refuted such a “hack”.

However, going back to the publication, it can be noted that it confirms the words of the Russian leadership about armament, aggressiveness and extreme danger for “wrong” (from the point of view of the radicals) people - by nationality, political views, etc. Especially if you recall the plans of the "Right Sector" about "trains of friendship" to the Crimea with punitive operations or claims to Russian territory.

Congratulations, in the USA journalists began to see clearly! Recently, by the way, the BBC has released a scandalous video report from Kiev. In it, entitled "fascist patrols on the streets of Kiev" shows how right-wing radicals with the appropriate symbols behave on the streets of the Ukrainian capital. Other media also posted videos - they, for example, are being bullied at the subway or “resistance of the Maidan” are interrogated by passersby on the street “where they were when we defended democracy on Maidan”.

And we are not talking about the sensational statement of the “best US diplomat,” former US ambassador to the USSR, “curator of the collapse of the Empire,” John Matlock, who said that the US is guilty of aggression, interventions, hypocrisy and has no right to criticize the Russian Federation, especially about "concern for the sovereignty of other countries."