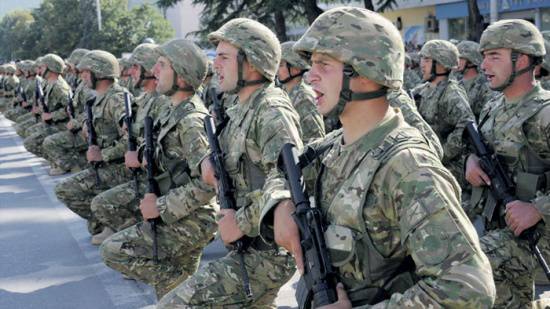 Georgia will take part in an EU operation to maintain order in the Central African Republic (CAR). At first, 150 military personnel will be assigned to this country to perform duties as part of one of the teams of the EU military contingent. In Tbilisi, the government’s decision provoked mixed reactions.


A mission in the Central African Republic will be the fourth foreign mission of the Georgian military. Before the African continent, they served in Kosovo, Iraq and Afghanistan. At the same time, Georgia is the most active contributor to operations in Afghanistan - 1800 people are serving in this country, which is the highest indicator among the countries participating in the operation, but not belonging to NATO.

As Georgian Defense Minister Irakli Alasania said, supporting the European Union in carrying out tasks in the CAR is a matter of honor and moral duty. “This will be the first contribution of Georgia to the EU security and defense mission, as well as our first operation in Africa,” Alasania said. According to him, initially it was a question of sending 600 military personnel, but after studying the degree of complexity and the tasks to be solved in the CAR, the total number of military personnel of the EU mission was reduced to 800 – 1000 people. More accurately it will become known next week, but with the “Georgian detachment” everything has already been decided - after reducing the total number, the need for a large Georgian contingent has disappeared. Therefore, after some clarifications, it was decided to send troops to the 150 CAR, and this number is unlikely to change.

The first transfer of EU troops, according to the commander of the operation of the French General Philip Pontier, will take place the other day. And in full readiness the military contingent under the command of France will be by the end of April. It is assumed that the mission will last up to six months. During this time, the forces flying the EU flag will have to create a security zone at the airport of the capital of the CAR - Bangui - and the surrounding areas so that the refugees will have the opportunity to return to their homes.

Georgian military expert, editor-in-chief of Arsenali magazine Irakli Aladashvili, commenting on what is happening, noted that the mission of the Georgian unit to the EU military mission takes place within the framework of cooperation between Tbilisi and Brussels. On the one hand, participation in the operation in the CAR demonstrates the direction of Georgia’s foreign policy vector to the West, and on the other, it is useful for Georgian soldiers and officers to gain experience in cooperation with advanced armies of Europe.

Irakli Aladashvili, however, refrained from assessing the situation in terms of improving the prospects for Georgia’s accession to NATO. “Of course, the participation of our soldiers and officers in the special operation in the Central African Republic will be taken into account. But on the other hand, in Afghanistan, as part of the NATO forces, 1800 Georgian servicemen are serving - more than from any other country not part of the Alliance, this is noted, the country’s leadership receives thanks from NATO, but even the relatively precise date of entry Georgia’s bloc remains unknown, ”Aladashvili told NG.

In the matter of cooperation with NATO in Georgian society there is no past unity. If a few years ago, at least 80% of the population favored the country's accession to the Alliance, today this figure has decreased. By some estimates, it may not even achieve 50%. Even at the peak of the popularity of the idea of ​​joining NATO, the majority of the population had a negative attitude to the fact that the Georgian military served in hot spots outside the country. The other day, when President Georgy Margvelashvili, speaking in parliament, called on the government to approve a mission to the CAR, the publication Georgia and the World published an article in which, not without sarcasm, it is noted that “no one has yet fully understood what our soldiers are fighting in Afghanistan, and now it turns out that the Georgian contingent intends to take part in a military operation conducted in Central Africa. "

The publication reports that many European states refused to send their soldiers to the CARs, where cannibalism has not yet been eliminated. Analyzing the incomes of Georgian soldiers and officers (at private - 1001 dollars, at the vice-colonel - 2041 dollars), “Georgia and the World” expresses confidence that foreign business trips are attractive for them only by their material side, if we forget about the problems of the country's territorial integrity existing threats, in the prevention of which an experienced army is indispensable.