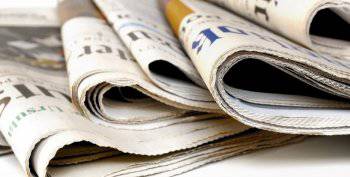 Today, the real information war is unfolding around the situation in Ukraine. On the same event, different media can provide diametrically opposite information in its essence. Ukrainian Gromadske TBThe other TV channels of the country can reflect what is happening with the very different views of experts and even of the journalists themselves.
In the information war, all means are good. Some TV channels follow the path of objective coverage of events, giving their viewers the opportunity to independently assess the situation that is presented on the television screen. Other media outlets are ready to conduct their own campaign, which is aimed at covering only those moments that are beneficial to the owners of the TV channel. As a result, a motley picture of events, judgments, frames, reportages is collected, in which it is extremely difficult for the common man to choose the most objective information.
The Western press also has its own informational, and often pseudo-information campaign, which is associated with events on the territory of Ukraine. Some Western publications try to present a picture of Ukrainian events from the most independent point of view. But not all do so. The American channel CNN is doing its usual thing - showing the Ukrainian situation from a single angle. All that does not meet the interests of the leadership of the United States and the official position of Washington, journalists from CNN skillfully bypass. However, this does not prevent those American citizens who wish to get an objective assessment of the events in Ukraine to achieve their goal.
Even 10 years ago, it was difficult to even imagine that the voice of the media, which are trying to shake the American propaganda machine in the information field, can be heard in the United States itself. Today there are many Russian sites that have access to a wide world, including American audience. One of these sites today is the Russia Today channel, which reports to many countries of the world, talking about Russia and the official position of the Russian authorities in various languages ​​of the world. March 4 RT conducted a live broadcast on the broadcasting countries of the press conference of Vladimir Putin, at which the Russian president spoke on the Ukrainian events.
Ctrl Enter
Noticed oshЫbku Highlight text and press. Ctrl + Enter
We are
And you learn and serve. A colorful picture of the new Russian army
Military Reviewin Yandex News
Military Reviewin Google News
1 comment
Information
Dear reader, to leave comments on the publication, you must sign in.