March 5 2014
8
Today, at the mention of the name of Sedov, at best, the majority recall the Russian sailing ship, someone that this name is somehow connected with the sea, but many will not be able to say anything definite. The memory of people is selective, especially when it comes to events of the distant past. 5 March 2014 marks exactly 100 years since the death of George Sedov, who was a Russian naval officer, hydrograph, and polar explorer. He died while trying to fulfill his dream of reaching the North Pole.


Georgy Yakovlevich Sedov (1877-1914) was a native of an ordinary fishing family. Low origin did not prevent him from writing his own destiny. He managed to become a naval officer fleet (senior lieutenant), was an honorary member of the Russian Astronomical Society and a full member of the Russian Geographical Society. He has participated in a large number of expeditions, including expeditions to study Novaya Zemlya, Vaigach Island, the mouth of the Kara River, the Kara Sea, the mouth of the Kolyma River and marine approaches to this river, Krestova Bay, and the Caspian Sea. During the USSR, the activity and research of George Sedov was given increased attention. The suitable origin of the navigator played his role in this - he emerged from the lower layers of society.

Georgy Sedov was born 5 May 1877, in the small village of Krivaya Kosa (now it is the village of Sedovo, in the Donetsk region). The village is located on the picturesque coast of the Azov Sea. The boy's father was a fisherman, from the age of 8 onwards, he began taking his son to fish in the sea. The family lived rather poorly, the father often drank and could not appear at home for a long time. For this reason, George could only get an education. At one point, he even had to become a farmhand at a wealthy Cossack, working at his house for food. 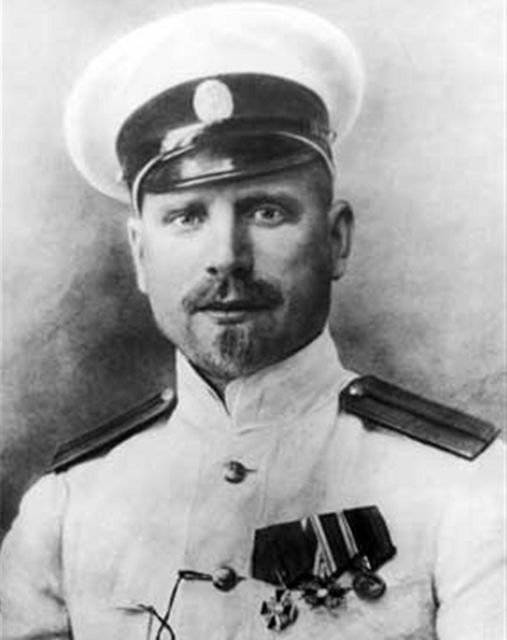 Only in 1891, at the age of 14, George Sedov entered the parochial school, where, however, he demonstrated that he had the ability to learn. He managed to complete a three-year course in 2. Even then, he formed a dream - to become a captain. At the same time, the young man had already heard about the existence of special nautical schools in Taganrog and Rostov. Therefore, without thinking twice in 1894, he left home, taking away documents and letters of commendation for his studies. And he studied, although not enough, but well. Sedov was the first student of the school, an unofficial assistant teacher and received a commendation sheet after the training.

In Rostov-on-Don, the head of the school, having interviewed the young man and convinced of his literacy, promised to enroll Sedov, but only on the condition that the young man provide him with a three-month voyage certificate on merchant ships. To fulfill this condition, Sedov had to get a sailor on the ship. After that, with all the necessary recommendations and documents, he again arrived at the school and was enrolled in it. In 1898, he graduated with honors from the nautical school, having received the education of a navigator.

Almost immediately, a young sailor could get an assistant captain on the ship "Sultan". Georgy Sedov was associated with many different tests with this merchant ship. Once, the captain of the ship was seriously ill during the march, the young navigator had to take command of the Sultan. All this was accompanied by stormy weather, but, in spite of a strong storm, Sedov managed to bring the ship to the port of destination. Having occupied the post of captain, he managed to get an unforgettable experience. After walking for a while on different seas, he decided to continue his studies. In 1901, Sedov managed to pass exams for the full course of the Petersburg Marine Corps. Just a year later, he received the rank of lieutenant of stock and was seconded to the Main Hydrographic Office. That is how his life journey began. 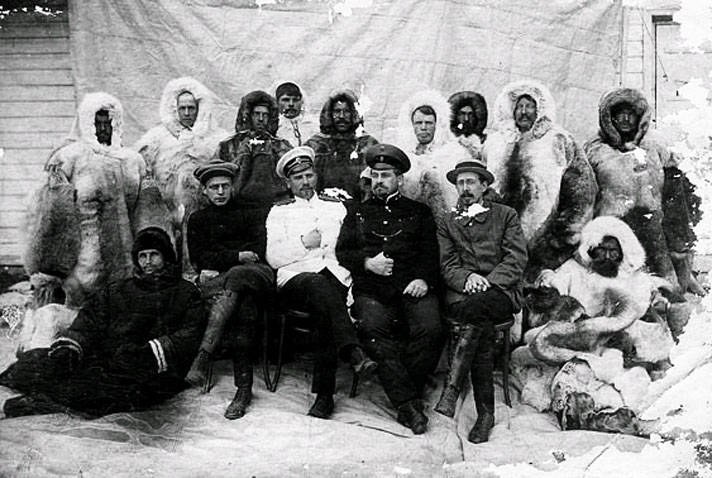 In April, 1903, Sedov goes to Arkhangelsk, on this trip he manages to take a direct part in an expedition to explore the shores of the Kara Sea and the Novaya Zemlya archipelago. Having spent in these harsh lands around 6 months, George Sedov just falls in love with the Arctic for the rest of his life. For some time, his research was interrupted by the outbreak of the Russian-Japanese war. The officer was sent to serve in the Far East, where he was appointed commander of the destroyer (a special mine vessel with a displacement from 20 to 100 tons). However, during the war and after Sedov, he dreamed of going back to the north of our country. He returned to St. Petersburg to his former place of service only in 1908.

At the same time, the Main Hydrographic Office initially sent him to work in the Caspian, where he conducted research for a year. After that, Sedov was interested in the problem of patency of the Northern Sea Route. This interest was noted, and George Sedov was appointed senior expedition, whose main goal was to study the mouth of the Kolyma River and search in this region of the country for a convenient fairway for numerous merchant ships that came from Arkhangelsk. During the year, while the expedition continued, Sedov not only was able to describe and map the mouth of the Kolyma River, but also to conduct research on the adjacent sea coast and its depth near the coast.

Returning back to the capital, Sedov read a report on the expedition in the Geographical Society, where he expressed his opinion that the lower reaches of the Kolyma River are suitable for navigation. In addition, Sedov proposed a new method for determining geographical coordinates. After this speech about Georgiy Sedov in Petersburg, they began to speak seriously. He was able to become a member of the Russian Geographical Society. All this time he could not leave the thought of organizing an expedition to the North Pole. 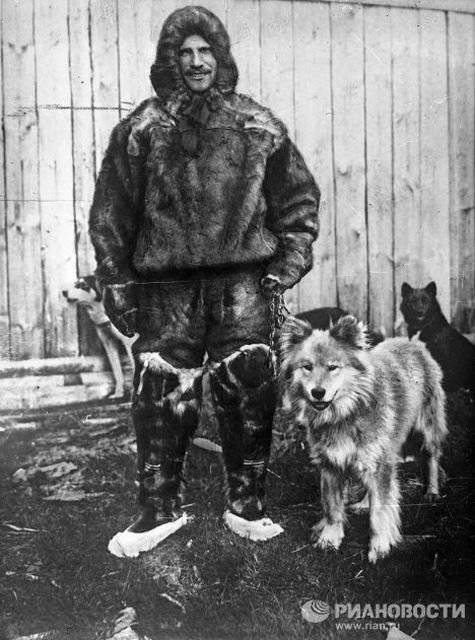 George Sedov in a polar suit in Arkhangelsk in 1912

At the same time, at that time both poles of the planet were already conquered by researchers. Attempts to conquer the North Pole have been made since the mid-19th century, but only 6 of April 1909 managed to do this. Americans distinguished themselves, Robert Peary, after numerous unsuccessful attempts, managed to reach the North Pole, setting the American flag on it. At the same time, another American explorer, Frederick Cook, also announced that he had managed to reach the North Pole with his expedition. At present, disputes about which of the two Americans was the first, and whether their expeditions have visited the North Pole, are still continuing. In such a situation, the Russian Empire, a country that claimed the leading position in the world, did not want to stand aside. It was only necessary to find a brave man who would implement this project.

Such a daredevil was found, they became Senior Lieutenant George Sedov. Sedov was always surprised by the fact that none of the inhabitants of Russia had ever even tried to conquer the North Pole. And this is with such a geographical location of our country. The State Duma of the Russian Empire approved the proposed plan of the expedition, but the government refused to allocate funds for it. As a result, the money was still collected, but in the course of an organized private campaign to collect it. Including with the help of the New World newspaper and its owner M. A. Suvorin. Among the major private investors of the expedition was the Russian Emperor Nicholas II, who personally allocated 10 thousand rubles for the needs of the expedition. Total managed to collect more than 40 thousand rubles.

The expedition helped with the ship. The hunter Dikin agreed to transfer to the expedition's freight a sailing-steam ship bearing the name “Holy Martyr Fock”. It was a two-masted ship built in Norway, the ship was notable for its developed sailing armament and had additional skinning of the sides. The ship had everything necessary for navigation in the northern latitudes. The start of the expedition, albeit with considerable difficulty, was given 27 August 1912. 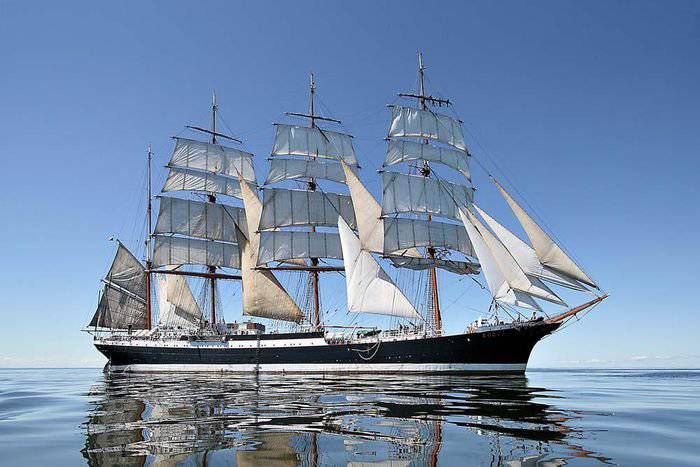 The expedition reached the archipelago Novaya Zemlya quite safely. Further its path went to the land of Franz Joseph. At the same time members of the expedition had to stay for the winter in the New Earth. For almost a year, the schooner "The Holy Martyr Fock" stood icebound. During this time, the crew completed the necessary repairs and in August 1913 of the year continued its further journey. For the second wintering, the ship stopped on Hooker Island in the Tikhaya Bay. These were very long and cold days. By this time, many of the expedition team had already opposed it. Coal reserves were running out, in order to warm up and prepare food the members of the expedition burned everything that came their way. Some members of the expedition suffered scurvy, and George Sedov himself became ill, but he did not want to retreat from his plans.

This was partly explained by the fact that part of the funds for the expedition were received by him as loans, Sedov had to pay for them from the fees for the provided research materials. Therefore 15 February 1914, George Sedov, with a few dog sledding volunteers, went to Rudolph Island. The researcher planned to walk to the northernmost point of the Earth, hoisting the Russian flag there, and, at the behest of the ice, return either to Novaya Zemlya or go to Greenland.

Every day, the expedition ran no more than 15 kilometers. The researchers were interfered by the strongest wind penetrating to the bones, cracks and wormwood in the ice. At the same time, the forces gradually left the Russian explorer, but Sedov did not give up. After a week's 3 weeks, his body couldn’t withstand exhaustion and illness, and his heart just stopped, it happened 5 March 1914. They buried Sedov on Rudolf Island, the northernmost island of Franz Josef Land. After that, in a few days at the cost of tremendous efforts, the sailors were able to reach their vessel, the Holy Martyr Fock, who returned from this expedition to Arkhangelsk in August 1914. A medical study showed that not a single healthy person was left on board the ship. Despite the tragic finale, George Sedov was able to forever inscribe his name in the development of the Arctic.

The name of George Sedov was forever immortalized on geographical maps. The archipelago, cape, bay, peak, as well as a separate village were named after him. At one time, under his name went hydrographic icebreaker and river passenger ship. At the same time continues its history four-mast bark "Sedov", where future sailors are trained. Today this bark is the largest sailing ship in the world.