March 5 2014
41
Yakut OMON: fought sensibly, did not surrender to captivity, did not abandon their


In the spring at the beginning of the 2000s, a column of military equipment stopped on a street in the foothills of the Chechen village - the road was blocked off by a bus with a painted wolf and a grinning driver behind the wheel grinning on board. Suddenly, the driver's expression changed, and he hastily pressed on the gas - from the height of the armor that had seen “behi”, the slanting faces of the Yakut OMON fighters stared calmly at what was happening.

The special purpose police unit of the Republic of Sakha (Yakutia) formed 1 on April 1993 of the year on the basis of a separate special task platoon of the PPP battalion commanded by then senior police lieutenant Alexander Ryzhikov. Instead of the required staff, hundreds of 20 people scored. Two weeks later, the detachment received the first combat mission and immediately flew to a remote ulus, where the offender killed the security officer, captured him weapons and disappeared into the taiga. 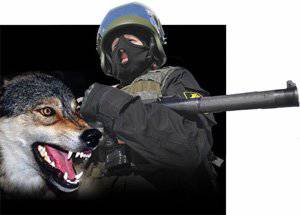 A series of Caucasian business trips began for the Yakut riot police in May 1995-th. Fifty fighters flew to Mozdok for the first time - a transit point on the way to the next in peace to Chechnya. The new location is the city of Argun, the military commander's office, which they took under protection. They also carried out other combat missions: they served at the checkpoint, inspected the passport regime, inspected vehicles, and carried out “stripping”.

In the fall and winter of 1995, a second mission took place - the commandant of the Leninsky district of Grozny. The main task is the same, but others have been added. For example, night patrols in its sector of the destroyed city. Riot police, ready to perform tasks of such complexity, was then a little. Night raids Yakuts gave good results. The enemy got nervous and made unsuccessful night attacks on the commandant's office a couple of times. Then several employees received their first wounds and awards - the Order of Courage.

In the summer of 1996, when a detachment stood in the Naursky district, at the checkpoint at the entrance to the district center, two fighters detained an entire convoy of so-called free-flowing gasoline dealers. The convoy was accompanied by several supposedly local policemen, and in fact, armed people with “necessary” certificates. Having understood that only two OMON fighters want to prevent their illegal business, they began to threaten "these Asians" with a weapon. But one of the "Asians" - the senior police officer Valery Krasikov managed to get in touch with the base, and after five minutes, to the surprise of the fake police officers, at the checkpoint rushed to the old "Ural" with a dozen armed Yakut riot policemen. Dumbstruck offenders were detained without firing a shot.

The second part of the Chechen adventures of the Yakut riot police began in September 1999, when the troops re-entered Chechnya. The new place of service - the border village of Sary-Su. One night, returning to base, the Ural went astray. After a two-hour night walk, the car finally left for some checkpoint. It was there that it turned out that riot policemen several times drove into the territory controlled by the gangs.

The squad suffered its first combat losses in January 2000 in Shali. 7 January, Christians celebrated Christmas, and Muslims - Uraza Bayram. On the eve of the snow fell. The mood of the soldiers was elevated. In the morning, a satellite communication session took place and everyone was able to communicate with family and friends a little. Suddenly, an order was received - to move to the area of ​​the pipe plant in the village of Germenchuk, where a group of militants up to 10 a man held several hostages. The Yakuts headed by the lieutenant colonel of militia Alexander Ryzhikov also entered the formed consolidated detachment from 60.

Intelligence at the time let down. Militants turned out to be several times more. They realized it was too late when they got into a fight. The gangsters had a well-established defense system and targeted fire sectors. They made it possible for the fighters to come closer to the high concrete fence, behind which they sheltered, and opened aimed fire.

In the first minutes of the battle, a machine gunner of the junior police sergeant Stas Golomarev was killed, several employees were injured. Other members of the detachment suffered losses - the Volga Sobrovists, police officers from the Shali VOVD, and military personnel of the explosives who lost two infantry fighting vehicles. The command of the consolidated detachment was lost.

Anticipating an easy victory over the feds, the militants began to shout: “Russians, give up!”. One of the riot police shouted in response: “Do you accept the Yakuts?” - and, after giving an aiming queue, he was able to bring a few wounded to a safe place.

The combined detachment who has found himself in a difficult situation and losing people was led by the commander of the Yakut Special Police Forces, Alexander Ryzhikov. Having assumed the leadership of the battle, he constantly kept in touch with the base, managed to competently organize the departure of people from the trap, evacuate the wounded and thereby save the lives of twelve soldiers. I did not save myself. The sniper mortally wounded him in the neck. Alexander was carried on his hands, but could not be saved. Posthumously Ryzhikov awarded the title Hero of Russia.

The next morning, a gang of several hundred people, led by the former “minister” of the Sharia security of Ichkeria, Aslanbek Arsayev, entered Shali and actually seized the district center. Only the military commandant's office and the ROVD building remained in the hands of the federal forces. The Yakut OMON is one of the few units of the blocked garrison. On the offer to the “Russian dogs” to lay down their arms and surrender, removing the Russian flag, the Siberians responded with accurate shots. Not having suffered a single irretrievable loss, they managed to survive, having destroyed several of the bandits who had lost their vigilance. In the environment they spent almost a week.

After the debacle of Shali was over, the riot police performed combat missions for another two months.

After a month break, the squad was again in Chechnya. Point of stay was the village Kurchaloy. Glory went on the heels of the Yakuts - they do not surrender to captivity, they don’t give up theirs, they fight sensibly. Once again, this was confirmed by the police major Viktor Vologodin, who acted as the detachment commander. The car in which he was driving to the base was ambushed; the driver received several bullet wounds in the stomach. Victor, despite the injury, jumped out of the cab and opened aimed fire at the attackers. Having received a fitting rebuff, the bandits retreated. The commander stopped the first available car and hauled a seriously wounded comrade on it to the nearest medical center: it was not even minutes that his fate was decided - seconds and he tore them from death. The fighter is still alive. Victor Vologodin refused hospitalization and, having made a dressing, returned to the detachment to his own.

He participated in the Yakut riot police and in the "mine war". She turned in Chechnya since the end of 2000, when the separatists realized that they were losing their chances to turn the tide in their favor. Detachment sappers got the hand not only to carefully remove the bombs, but also to put them on the paths of "those born on the night when the she-wolf was whelping" (words from the Chechen separatist hymn. - Author's note). In addition, the Yakuts took patronage over the road in their area of ​​responsibility, and since then the explosions on it have ceased.

On account of strong and courageous guys from the Yakut riot police more than a dozen business trips to Chechnya, Ingushetia, North Ossetia, Kabarda. In memory of them in the detachment survived a trophy - a manual wolf named Storm.

Ctrl Enter
Noticed oshЫbku Highlight text and press. Ctrl + Enter
We are
Some examples of actions by US and British Special Forces in the 90s of the 20th centuryRiot police. Krasnodar
Military Reviewin Yandex News
Military Reviewin Google News
41 comment
Information
Dear reader, to leave comments on the publication, you must sign in.