More recently, the West is actively arming the Arab world 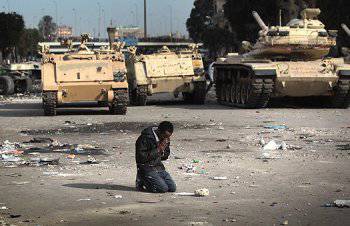 British Prime Minister David Cameron, as a rule, plans his overseas visits two to three months before a specific date. So for February and March of 2011, visits to a number of countries in the Middle East were planned, but the revolutionary events in the Arab world made adjustments to the plans of the politician. The planned visit was for the most part a trade mission of sorts. A significant part of the delegation consisted of the leaders of the military-industrial complex of Great Britain.

It was impossible to ignore the revolutionary and fighting in the Arab countries of the Middle East and Libya. Considering all this, Cameron was forced to include in the tight schedule of visits a six-hour stop in the capital of Egypt. More than a month ago, he visited the central square of Cairo - Tahrir, which became the venue for the most massive demonstrations, which eventually forced the elderly Egyptian leader Hosni Mubarak to resign.

On his visit to the square, Cameron said the following: “Meeting with young people, as well as representatives of their organizations in the central square of the country, Tahrir was encouraging. These people understood that they were risking so much for what they truly believed. ”

After a short stay in Egypt, Cameron flew to Kuwait, where he was in urgent and urgent business: selling weapons Arab dictators. Shortly before the trip, members of parliament sharply criticized the policy for the complete lack of tact. In response to all the statements addressed to him, the Prime Minister stated that he personally doesn’t see anything wrong with conducting such business operations, and that his government in every case requires arms buyers to submit obligations that, regardless of the circumstances, they will not use the weapons he supplied for human rights violations. Britain, according to him, "there is nothing to be ashamed of."

But Cameron forgets to mention that Britain only in the last two years has sold Gaddafi weapons for more than 100 million euros. The total volume of these supplies included sniper rifles, which are now used against the Libyan opposition. But weapons, this is not all that binds Britain with Libya and the ruling regime. Police Muammar Gaddafi also prepared by British experts. In reality, British leaders urgently had to revoke 50 of issued export permits for the supply of arms to Libya and Bahrain.

At the moment, Cameron is in a very delicate situation compared to other Western politicians. Politics, which previously suited everyone before the start of revolutions, is doubtful today. The existing regional paradigm is extremely changeable, and in a period when the peoples of the states of the Middle East and North Africa throw off the yoke of oppression and tyranny, Realpolitik is a rather bad adviser for politicians in Western countries.

More recently, the West quite actively armed the tyrants of the Arab world, signing ever-larger contracts, the sum of which amounted to billions of dollars, which helped to ensure the stability of their regimes. Some of them are close allies of Iran and al-Qaeda, taking into account all this, issues related to the observance of human rights and even more so democracy become secondary.

In addition, most of the rulers of this region for the West were the most convenient partners: they kept their people under control, and some were suppliers of such necessary oil. Even Muammar Gaddafi was useful, given the fact that he did not let the poor refugees from Africa to Europe. Another thing that attracted Western officials in the sale of weapons to Arab countries was not the intelligibility of their rulers, they bought literally everything that was offered to them, including obsolete weapons. This directly related to the military industry in Germany. According to data from the Stockholm International Peace Research Institute, significantly lagging behind such giants of the arms market as the United States and Russia, Germany has been able to reach third place in the world in terms of the number of weapons and military equipment sold in the past few years. Much of the weapons sold are inferior to modern models, but for the rulers of Arab countries this was not an obstacle. This allowed Germany to significantly modernize its military-industrial complex due to significant financial revenues. German military equipment became so high-quality that even Russia began to buy it. The military products of Russia itself have proven themselves in partisan wars in Africa, Russian Defense Minister Anatoly Serdyukov acknowledges the fact that she can no longer meet the “modern requirements”.

Compared to Russian plans, the procurement of Gaddafi looks much more modest. Until October 2004, Libya was under EU embargo on arms supplies. But already in 2005, German companies delivered all-terrain vehicles to the country worth more than 300 thousand euros. Over the course of 2006, the amount of weapons orders jumped to 2 million euros. Further amounts only increased, 2007 year - 24 million euros; 2009 year - 53 million euros. The only unsuccessful year was 2008, when the amount of arms deliveries under contracts fell to 4 million euros.

Libya bought modern Milan-3 launchers for anti-tank missiles, helicopters, radar stations directly for the battlefield, communication systems and electronic jammers. It is possible that the latest samples of the Franco-German military equipment serve Gaddafi in his current military confrontations, given the fact that the opposition commanders from the east of the country mainly use cell phones to guide their chaotic operations.

In Germany, any export transaction involving the supply of arms must be approved by the official authorities. The Federal Security Council, which consists of the German Chancellor and various ministers, makes these delicate decisions at closed-door meetings.

But still, Italy remains the leader in the sale of weapons and military equipment of Libya. During the reign of Silvio Berlusconi, contracts for the supply of weapons worth over 110 million euros were concluded. These were mainly combat helicopters.

Meanwhile, the United States government thinks on a completely different scale, and especially when it comes to Saudi Arabia. The house of the great Saudis has a lot of money that he can and wants to spend, and Washington is on this issue to meet and equip Saudi Arabia to confront Iran. But, as is known on Monday, 14 in March, armed with modern American weapons, Saudi troops marched into neighboring Bahrain to suppress the uprising that broke out there.

Last year, the White House announced the largest in its stories export deal related to the supply of weapons. Saudi Arabia in the coming 5-10 years plans to buy military aircraft worth more than 60 billions of dollars. Money is not a problem for Saudis, and their air force should receive modern F-15 fighter-bombers, missiles, bombs, Apache attack helicopters, and radar equipment. According to the Wall Street Journal, the contract order is so huge that only Boeing will get more than 70 thousands of jobs within its framework. Similarly, the Saudi royal family plans to invest 30 billions of dollars into upgrading their navy.

Western countries continue to enter into new contracts for the supply of arms to the countries of the Arab world. In pursuit of profit, many politicians forget that the targets of their modern weapons can be their own soldiers.