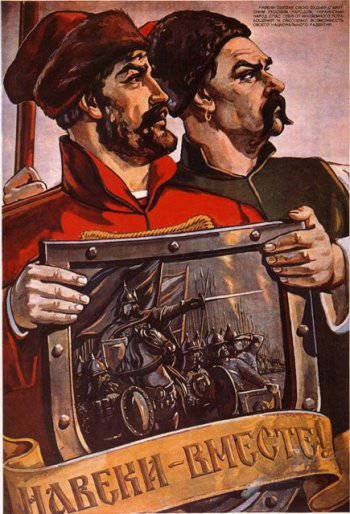 Already 23, we are independent and free. We are not slaves, we are not cattle, we are almost Europeans. Isn't that the most beautiful thing that could happen to us? We have thrown off all the shackles that can be thrown off. We are freed from the bloody tyrants, from the bloody stories. From everything that connected us with "them" For such a long time, almost a quarter of a century, such an air of Freedom, Equality, Brotherhood, which is nowhere else, has been walking around our country. Isn't that right? Shouldn't we be proud of it all the time? Isn’t it what we wanted and isn’t it what we wanted for all these years? Isn't that what we hear from TVs and the Internet every minute? We are ready to give life for this freedom !!! This is our highest value. There is no higher. There is nothing more important in this world than our independence. Hands off Ukraine. And so on and so forth…


And from whom are we independent? As a country, as a people? Just a minute ... just think. Who owns the power? People? Or oligarchs? Who has grown rich all these years? The people or they, these guardians for the people, who shout the loudest about our unity and our freedoms? Whose channels and sites tell us about this every minute? Why each president we have chosen every time promised us so much ... and why in all this time we have not received anything except this "freedom" and "independence", for which we are now ready to die in the struggle with the evil and cunning neighbor ? Each of us owes more 3000 dollars. Everyone, including babies! It is our duty to the whole world. 140 billion dollars. Where is the money? They are not! And there are debts. And you, and me, and every member of our families need to pay for them. This is our independence. Can a debtor be independent, as they say to us all this time? Is this what is our main value? Pay debts? And by the way, this value is growing every year.

And to whom all these years our main value - Independence served? Authorities, politicians and oligarchs? Hiding behind the elections, we were forced to choose the next noisy politicians. That promised us prosperity again and again. And again and again this did not happen. Rather, prosperity happened in power, politicians and oligarchs. And this time, do you think we will be luckier? So maybe for oligarchs, independence is the main value? Independence from the people. Freedom to rob, steal, freedom to lie and pit us among themselves. All that surrounds us, that our parents built, fathers belong to them. They were able, hypnotizing us with words about freedom, democracy and independence, to appropriate everything to themselves! They collect loans, build castles, villas, yachts. They have accounts abroad, and their offsprings study at the most prestigious and expensive universities in the West. And we pay for it! And if you doubt the value of such independence, then you are a traitor, you sold yourself to Moscow and Putin personally. Is not it? Or maybe over the years we have become independent and free from our history, our language, our roots and ancestors? We were forced to abandon their exploits, great exploits and achievements of our people. Our Great Folk.

For some reason, our heroes are now those whom our ancestors crushed during the Great War. As it happened, we demolish our own monuments, monuments to our ancestors, fathers and grandfathers. This is our memory. Who needs to destroy it? We are crazy as we again climb the barricades. Orem, that this time we will definitely live like a fairy tale. Once again this happens to us, what a vicious circle it is. What a wraith? We got rid of the corrupt power, again. For the umpteenth time. And again the ghost of hope, like a mirage beckons, whispering from all the irons, that this time we will certainly flourish and everyone will just die of envy. We have lost over the years more 6 millions! our citizens. These are impossible numbers. In peacetime. This is close to the loss of the entire civilian population of the USSR during the most terrible war in the history of mankind. And we lost them with peace, independence and democracy.

What have we achieved for this 23 year of this intoxicating freedom? What can we be proud of? What do our women care for old women or work in brothels? That our men are competing with Polish for the right to pick strawberries in Portugal or with Moldovans to lay tiles in Russia? What we do not have a normal army that can protect us, and now there is no police? And our children are ready to fight with our own sons and fathers from the Golden Eagle? It remains for us to be proud that we are Ukrainians. And this is our only reason for pride? Why are we trying to whitewash the traitors, and make them heroes? Where are our real heroes that the whole world knows? Where is our Shakespeare, Einstein, Gagarin? Anyone who can give us a glimpse, hope and faith? Take a minute from everything and sit in silence. Try to just think where all that we had? Why did we give up our victories? Why did we pick our sores with the famine and sit roar? How can this be inspired, create something and build under such an ideology?

Wait! But after all we launched the first satellite! That we defeated Napoleon, Hitler, the Turks and the Swedes and a bunch of other nationalities and tribes who came to our land! It was we who created the greatest and greatest country in the history of mankind! We created nuclear power plants and bombs! Yesterday, the whole world was afraid and respected us! Where is it now? Where? Why did we refuse to be a great nation and accepted the fate of the offended? Who stole our history and our victories from us? Russia? Muscovites? We allowed ourselves to do this, we ourselves abandoned our memory, our ancestors, feats. They believed in new false idols and heroes. Small and insignificant compared to what we had yesterday. Is it possible to compare Gagarin and Bender? In Kiev go ideological guys in masks and with sticks. One part of the people burned alive the other. Shoots at each other. How we allowed it. We again believe the new revolution, the new promises. Why we became miserable, constantly shouting that we are independent and free. We have stolen the past, now stealing the remnants of the future. We teach our children according to false textbooks of false history. How could this happen to us? What happened?

I envy the Russians, I envy these "Katsapes" and "Moskals". I envy their Olympics and their army, I have many friends, there are relatives in Russia. And I see how they change and grow. They believe their President. They believe in their army. They are proud of their great history, their achievements and victories. And this was our common history ... and victories and achievements. Just yesterday. They reconciled with themselves. They spat on the idolized us West. And they go further and develop in order not to tell us on our televisions and on our forums. And I understand that we are losing it, not they. We become weaker, and they are stronger. And no matter how loudly we shout "Glory to Ukraine!" it will not stop. More recently, we were talking maliciously when they had Chechnya. And now the Chechens are no less Russian than the Russians themselves. They are ready to fight for their resurrected and great country. Part of which they are. And already the Chechen battalions frighten us. How did this happen ??? They killed each other yesterday. And the reason is simple, the Chechens were able to remember that they are Russian, and that they are part of the Great Country and Great People.

We gloat when they have attacks and catastrophes. And they overcome them time after time and become stronger! Although the whole world is against them! They fall and rise again. Stand and lybytsya. They just spit blood through their teeth. And we shout that they are slaves. Soon they will fall apart, oil will fall, NATO will attack, and another punishment will come down on them. But, after all, they are us! We spit in our reflection. In themselves.

We need to remember that we are one. And when we begin to understand and realize this. That feeling will come when the former is in our ancestors. A feeling of inner strength, hope, faith and pride in the fact that we are also Russians. And it does not matter who our ancestors, Ukrainians, Tatars, Jews, Buryats or Uzbeks. It does not matter who we are by faith, Catholics, Orthodox, Muslims or Jews. It is not important. The main thing is that we are Russians! And we are part of a great nation and great country. Yes, our great country and great people still have problems. But if we remember that we are Russians.

Change all and forever! And everyone is afraid of this. They are afraid that we will remember it and be together again. And therefore this web of lies, lies lies on all sides. All this anger and hatred is maintained, both in Russia and in Russia. They do not allow us to wake up. And if we do not remember who we are, then we will never wake up ever. Regarding the situation, occupation and other things. Who shouts the loudest that we need to protect "our" independence, unity and freedom? The same officials, oligarchs and deputies. They are terrified that they will have to answer for everything that has happened over the years with our homeland. Or maybe this is not an occupation? Or maybe this is a release? It came ours, when there was almost no hope left, when we almost gave up. And we need to stand together and destroy all these deceitful politicians, oligarchs, mayors and officials, who are screaming at our mouths to go die! To die for their villas, yachts and castles, for their bank accounts, for their freedom to rob and independence from answering for their actions.

I understand that this manifesto will be cut from the Internet. There will be thousands of angry comments, they will shout that I am a traitor, I sold myself to Putin, that I am a Katsap, a quilted jacket and a Moskal. I do not care. I know the truth behind me. I am a patriot of Ukraine, a true patriot, and now the fate of my people and my Ukraine is being decided. We either remember who we are or just disappear. I love my Ukrainian people, my ancestors and my culture. I am Ukrainian, but more than that I am Russian!

Ctrl Enter
Noticed oshЫbku Highlight text and press. Ctrl + Enter
We are
Situational analysis of the death of the MH17 flight (Malaysian Boeing 777), made on the basis of engineering analysis from 15.08.2014Bashar al-Assad: In Syria, not the “revolution” that the enemies are talking about, but the revolution of the army and the people against terrorists
Military Reviewin Yandex News
Military Reviewin Google News
92 comments
Information
Dear reader, to leave comments on the publication, you must sign in.