March 5 2014
202
Especially for "Atlanta Russia”Alexander Khramchikhin, deputy director of the Institute of Political and Military Analysis, analyzes in detail what the modern Armed Forces (VS) of Ukraine are and what response they can offer Russia in the event of a military conflict. 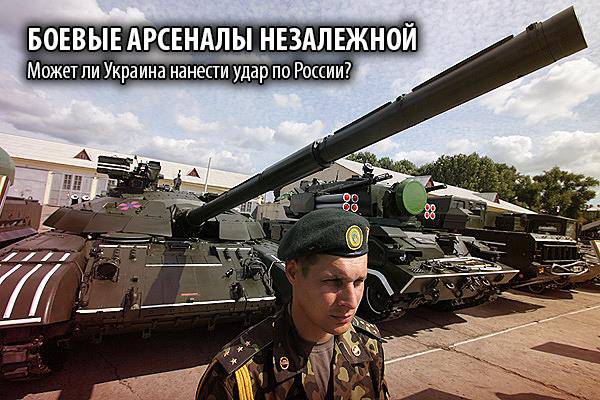 Immediately after the collapse of the USSR, the Armed Forces of Ukraine in their combat potential shared with China third and fourth places in the world (after the United States and Russia). However, during the post-Soviet period they experienced the hardest decline. Now on paper, the Ukrainian army is still quite large (although approximately 2-3 times in all classes of equipment is less than that in 1992 year), but in reality it is hardly even among the strongest armies in the world 50.

This situation is due to the fact that for the past 22 years, the troops have not received any new equipment (except 10 tanks T-84 "Hold"), and combat training was at a very low level. The Armed Forces of Ukraine are chronically underfunded throughout the entire period of the country's independence, the prestige of military service is very low. Ukraine is among the ten largest exporters weaponsAt the same time, on 80-90% its export is a sale of equipment from its own aircraft, and not the worst, but the best. Exclusively for export, and not for the armed forces of their country, the Ukrainian military-industrial complex operates.

The 25-i airborne (Gvardeiskoe village, Dnipropetrovsk region), 79-I (Nikolaev) and 95-I (Zhytomyr) airmobile brigades, 3-i (Kirovograd) and 8-i (Khmelnitsky) regiments of special forces are considered the most combat-capable.

The ground forces have 12 launchers (launchers) of tactical missiles "Tochka-U" (78 is still in storage), the firing range of which reaches 120 km. The tank fleet consists of the 10 of the aforementioned “Strongholds” and the 1100 T-64, of which 76 has been upgraded to a modification of the T-64BM “Bulat”. Approximately 650 T-64 is still in storage, around 500 T-72 and up to 250 T-80. The number of infantry fighting vehicles, airborne combat vehicles (BMD) and armored personnel carriers is about 3,8 thousand, of which the newest can be considered as 400 BTR-80. There are 3,1 thousand artillery systems, of which only the multiple rocket launcher systems (MLRS) - 137 "Hurricanes" and 82 "Smerchias" have sufficiently serious combat power. It must be borne in mind that all of these figures are “paper”: up to half of the equipment is, in fact, completely inefficient, absolutely all of it (except for 10 “Plots”) is very outdated, practically having developed a resource, since it was produced in the USSR.

The same applies to the military air defense, where there is a Buk-М60 anti-aircraft missile systems (ZRK) up to 1, up to 125 Osa and 150 air-missiles Strela-10, and to 70 anti-aircraft rocket-gun complexes (ZRPK) " Tunguska. The most modern air defense systems "Tor" were withdrawn from service because of the inability to service.

Ground-based air defense incorporates the 30 divisions of anti-aircraft missile systems (ZRS) C-300P, 14 battalions of the Buk-М1 air defense system; The 4 of the C-300В division and the 12 of the С-200 divisions of the СРС were withdrawn from service because of the impossibility of service.

If the ground forces and the air force, even on paper, have significant potential, then the naval forces of Ukraine are extremely weak. They include the submarine of the 641 project (it’s already 44), the patrol ship (frigate) of the 1135P project, two small anti-submarine ships (MPK) of the 1124М project and the patrol ship of the 1124P project, the IPC of 12412 project, two missile boats (12411T project and 206МР project) , 1400M project patrol boat, two 266М sea-going minesweepers, 1258 project minesweeper, large landing ship (BDK) of 775 project, medium landing ship (KFOR) 773 project. The real combat potential of the Navy is practically zero in any aspect (shock, anti-submarine, air defense).

The Ukrainian Armed Forces do not have any real impact on the territory of the Russian Federation unless they strike first, and the Su-24 pilots will agree to act as a kamikaze, and the technical condition of the aircraft and the level of training of the pilots will accomplish the task at least in this version. The probability of this option is zero. Moreover, all aircraft munitions were produced during the Soviet period, the storage period for most of them has already expired. Moreover, all of these munitions are either conventional unguided free-falling bombs, or missiles with a range of only a few kilometers.

It is somewhat easier to influence Russian troops in the Crimea, but this simplicity is also very conditional. It is obvious that parts of the Armed Forces of Ukraine on the peninsula have already been neutralized. At the same time, a Russian anti-aircraft missile regiment is stationed here, which is complemented by the anti-aircraft defense of the cruiser “Moscow” and fighters from the territory of the Krasnodar Territory. The Ukrainian side will not be able to achieve surprise, since both the Armed Forces of the Russian Federation and their supporters in the South and East of Ukraine are in full readiness (not only in the Crimea). Even the elite units of the Ukrainian Armed Forces have no chance of success in such a situation, they also become kamikazes. The expectation of provoking a war in order to receive foreign aid will only have the opposite effect: NATO forces will not take part in the war under any circumstances, and if the Ukrainian side starts to fight first, it will, to a large extent, also lose Western political support.

General mobilization may be for the Armed Forces of Ukraine "control shot". There are certain doubts that the Ukrainian state can really hold it. Let us even put aside low training of potential reservists, as well as the fact that a significant part of them are on earnings outside the country, or will try by all means to avoid conscription. Let us assume that it is possible to gather several hundred thousand reservists at the recruiting stations. After that, they will have to be separated into military units (a very difficult task in itself), and then provided with all kinds of allowance and position. Moreover, all these people are simultaneously transformed from producers to consumers. As a result, not only the military budget, but the economy as a whole is being hit hard. The longer the mobilization lasts, the harder it will be to hit the economy. And if at the same time the war does not start (most likely it will be so), even those reservists who come to the army of their own accord in order to defend their homeland will quickly begin to decay morally, this is an inevitable property of human psychology.

Saakashvili, starting his August adventure, was sincerely convinced that his army would easily defeat not only the Ossetian militiamen, but also the Russian Armed Forces. The current Ukrainian leadership is much more adequate, it is well aware that the real capabilities of the country's Armed Forces are almost zero. Therefore, mobilization is likely to quietly "shut up." And the tedious political and economic bargaining will begin.

Ctrl Enter
Noticed oshЫbku Highlight text and press. Ctrl + Enter
We are
Memo to mercenaries in AfricaThe armed forces of Syria on the eve and during the uprising in the republic (2011 — 2013)
Military Reviewin Yandex News
Military Reviewin Google News
202 comments
Information
Dear reader, to leave comments on the publication, you must sign in.