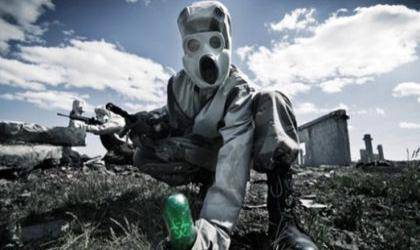 Ukraine has a lot of power. And if in the southeast, power retains its basic attributes as a whole, in the west it is captured by Bandera elements. There today, as Chairman Mao said, “a rifle gives rise to power”. Actually, already gave birth. In Kiev, power is shared by a boxer, a lecturer, a Baptist pastor and other equally exotic figures. The leadership of the National Security and Defense Council of Ukraine Maidan approved the TV presenter. The "post-revolutionary" Ukrainian state is learning to manage the cook, and this is not funny - it is dangerous. The lack of control of the forces released by the coup in Kiev, created a direct threat to the population of Ukraine, and where this threat may not be waiting for ...


Ukraine - in the recent past, an industrialized country with a high population density - is especially vulnerable when exposed to the damaging factors of a man-made nature that may arise when the respective industries are destroyed under the influence of terrorist attacks. In this case, the terrorists play the role of a trigger. Everything can happen even much simpler, the case may not reach the act of terrorism. If chaos continues, in a situation where the "treasury is empty," one step before employees of hazardous industries under conditions of non-payment of wages began to dismantle and remove cables and parts of critical components or began to trade, for example, radioactive isotopes. Such cases in the post-Soviet stories are known.

Of particular concern is the growing biological threat under these conditions.

In addition to the actual Ukrainian scientific and technical structures that were at the most advanced positions in the field of studies of pathogens of especially dangerous infections (OOI) during the Soviet era, the Americans deployed 11 (eleven!) Biological laboratories conducting highly dangerous biological organisms on the territory of Ukraine! The question is: for what?

“According to the information in the press,” writes the author of the article “Why does the Pentagon need a biological laboratory in Kazakhstan?” Dmitry Popov, “from the former Soviet republics, their collections of causative agents of dangerous diseases in exchange for American assistance were transferred to the United States, ignoring the concerns of Moscow, Ukraine , Azerbaijan and Kazakhstan ... In general, over several decades, the United States has formed an extensive network of dual-use laboratories in various parts of the world ... In the post-Soviet space, large laboratories are open Americans in Ukraine and Georgia. "

As it was noted in the report “Restoring American Defense: Strategy, Troops and Means for the New American Century” published in the USA in September 2000, in the XXI century “new methods of aggression will be distributed - electronic, non-lethal, biological ... fighting, probably will go into new dimensions - into space, cyberspace, and maybe into the world of microorganisms ... ”, and“ ... advanced types of biological weapons that can affect a particular genotype can translate biological weapons from the sphere of terror into Part of useful political tool. "

So we must not allow the forces that have prepared and committed a coup in Ukraine, losing control over the country, be tempted to use biological weapons as "useful political tools."

Under the conditions of the “national revolution”, such a threat is not at all abstract. In the scientific research institutes of Lvov, Kiev, Simferopol and Odessa there were kept and stored unique collections of strains of pathogens of especially dangerous infections (OOI), collected over the last 70 — 80 years. In Lviv Research Institute of Epidemiology and Hygiene work the best professionals in this field.

Today the question is highly relevant: what (or who) will be able to prevent armed militants of the same “Right Sector” from taking control over the said scientific research institute and getting OOI there both for “their own use” and “for export”!

Under these conditions, it is natural to expect that Moscow will make an official request to the US authorities on biological laboratories in Ukraine, demanding an answer on the merits, and at the same time officially declare the personal responsibility of representatives of the Ukrainian “revolutionary” government for the protection of biological laboratories. It seems that in the case of Lvov, an urgent evacuation of biomaterials, specialists and equipment is necessary. American "klopovniki" on the territory of Ukraine should be eliminated.