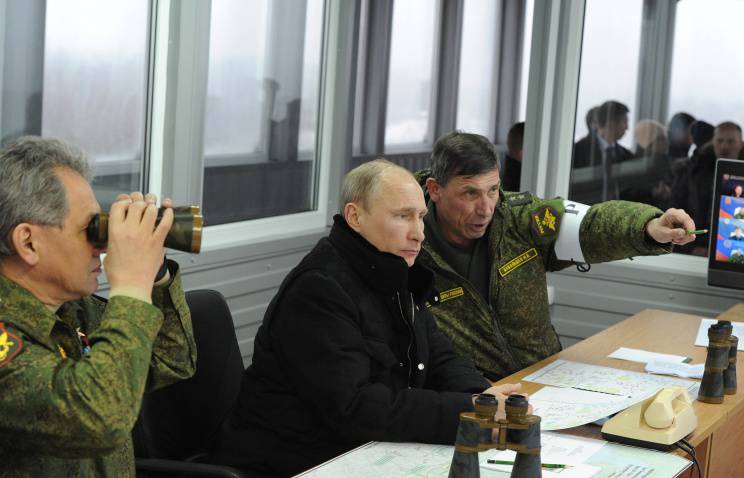 The Supreme Commander-in-Chief of the Armed Forces of the RF Armed Forces, Russian President Vladimir Putin, gave orders to troops and formations that took part in military exercises to return to their places of permanent deployment. This was reported to journalists by the press secretary of the head of the Russian state, Dmitry Peskov.


According to him, the day before Putin presented a report on the success of the exercise, "Supreme Commander-in-Chief of the Russian Armed Forces, Russian President Vladimir Putin ordered the troops and formations taking part in military exercises to return to their places of permanent deployment."

The head of state personally arrived at the military maneuvers that took place on Monday in the Leningrad Region. Together with Defense Minister Sergei Shoigu, Commander of the Western Military District Anatoly Sidorov, and Head of the Main Directorate of Combat Training of the Armed Forces of the Russian Federation Ivan Buvaltsev, the President observed bilateral tactical exercises of 138 separate motorized infantry brigades of the 6th Army of the Western Military District and 104 airborne assault regiment 76 of the Guards. -Attack division of the Airborne Forces. At that time, five main episodes were played out at the Kirillovsky training ground: combat operations by units of the first echelon of the brigade, destruction of the enemy detachment, paratrooper special operations on parachutes to destroy the command post, tactical airborne landings to isolate the combat area, defeat artillery and material battalion providing. More than 1,8 thousand military personnel took part in these exercises, more than 30 tanks, about 20 airborne combat vehicles, 5 aircraft, 80 helicopters.

In general, 150 thousands of military personnel were involved in the complex integrated verification of the combat readiness of troops and forces of the Western and Central districts and a number of combat arms of the Armed Forces, involved up to 90 aircraft, 120 helicopters, 880 tanks, 80 ships and ships.

Such maneuvers for the modern Russian army have become traditional. In 2013, on the instructions of the President of the Russian Federation, 6 sudden comprehensive checks of the combat readiness of the Armed Forces of Russia were conducted. At the board meeting of the Ministry of Defense in December 2013, the head of state noted that "they (checks) for the first time covered units of almost all types and types of troops throughout the country, and in some cases they checked the programs of interaction between the Army and federal and regional executive bodies." According to Putin, "the checks showed the state of affairs in the troops, made it possible to realistically assess their ability to solve not previously known, but suddenly arising tasks."

The shortcomings and problematic issues identified during the surprise inspection of the troops of the Western and Central military districts that ended the day before should be analyzed as soon as possible. The relevant order to the Chief of the Russian General Staff 4 in March was given by Defense Minister Sergei Shoigu.

“The Chief of the General Staff will, as soon as possible, analyze the results of the audit, identified deficiencies and problematic issues. By its results, submit a report to me with specific proposals for their elimination,” he said at the conference call.

The head of the Ministry of Defense of the Russian Federation noted that in comparison with the previous sudden checks there are noticeable improvements. Shoigu demanded to return the troops and forces that participated in the check-up to the points of permanent deployment until March 7. “I demand to accomplish this task in an organized manner, to prevent the violation of security requirements, the disruption of weapons and military equipment,” the minister instructed. He noted that a total of almost 3 thousand units of equipment attracted to the event turned to the total 18 units for repair. "This is a good work of our units to maintain the technical readiness of weapons and military equipment," added Shoigu.