Where will the Ukrainian army turn? 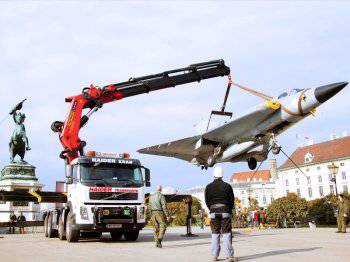 Against the background of the attempts of the new authorities in Kiev to strengthen their position by declaring “the fatherland in danger” and forcing military passions, the question arises: are they so sure that the power structures subjected to them to humiliation, including the army, are trying to protect them and identify the interests of the Ukrainian people with them ?


Are the couplers bluffing? Until now, “maydanschiki” blocked the army in the barracks, fearing that it will execute the order of the president-commander in chief to establish constitutional order. After all, according to the Constitution, Viktor Yanukovych to this day remains so. And if suddenly, after leaving the barracks, the military will listen to their formal commander-in-chief? After all, they swore an oath to the president, elected by the people, and no one held the oath-taking ...

On DEBKAfile's site close to the Israeli military intelligence of AMAN, citing sources in this intelligence, it is stated that "there is no confidence in Kiev’s control over the 160-thousandth Ukrainian army." No one knows to whom she will be loyal. There is a possibility that its command may consider the displacement of the coup regime in Kiev as the most reliable defense of the fatherland against war and separatism, due to its complete inability to fulfill its obligations to the country. The military can simply take power into their own hands in order to end the chaos reigning in Ukraine.

The decision of the National Security and Defense Council of Ukraine to bring the army on high alert and mobilize part of the 1 million reservists Israeli intelligence officers consider little practical, since it only "gives Putin a further reason to continue military expansion." How does the “broken administration in Kiev” intend to feed, equip, arm and provide transport for hundreds of thousands of new troops? And how much can the new regime be sure of their loyalty? According to the Israelis, the most productive for the West would be the removal of the most radical groups in Kiev and the achievement of a compromise with Moscow. Balancing on the brink of war will not lead anywhere. A base for mutual understanding already exists - this is the February 21 agreement.

At the same time, despite the initial extremely militant rhetoric, Kiev is gradually reducing turnover. In Crimea, there was a massive transition of Ukrainian troops to the side of the armed forces of the autonomy. Particularly indicative is the courageous act of Rear Admiral Denis Berezovsky, who swore allegiance to the Crimea on the next day, after he was appointed commander of the Ukrainian Navy by order of the Minister of Defense. There is no noticeable influx of conscripts to the military registration and enlistment offices either, the youth mostly “vote with their feet” towards the border. Therefore, the main “defensive” measures are currently limited mainly to appeals to the West.

However, in addition to demonstrating the growing confusion and complete dependence on the oligarchs Turchinov and Yatsenyuk, the forces on which they relied upon the seizure of power are operating in Ukraine. The world has already circled the statement of one of the most sinister figures of the Maidan, the leader of the Right Sector and Trident named after Stepan Bandera "Dmitry Yarosh that his organization is embarking on the formation of its own armed forces in all regions of the country in order to" ensure its defense. " And this means that attackers hysterical Yarosh will begin to break into the barracks and warehouses with weapons. Actually, this was expected, which was why preemptive actions of Russia followed. And not everywhere the military, in all probability, will be able to give a proper rebuff to the newly-minted Bandera.

It is also disturbing that the power bloc of the putschists were led by an adventurous warehouse, capable, for the sake of their ambitions and radical ideas, to kindle any kind of fire.

Secretary of the National Security and Defense Council (NSDC) - the commandant of the “euromaidan” Andrei Paruby was born in 1971 in Chervonograd, Lviv region. By education, in fact, a historian. However, his knowledge deepened in the field of manipulation technologies at the National University "Lviv Polytechnic". In 1988, he headed the nationalist youth organization Spadshchyna (Heritage). In 1991, along with Oleg, he was one of the founders of the Social-National Party of Ukraine (SNPU), which, because of its close association with German National Socialism, was renamed 2004 into the All-Ukrainian Union Svoboda, remaining ideologically the same pro-fascist. An active participant in the Orange Revolution. During the events of November-December, 2004 was the commandant of the Ukrainian House in Kiev. In the National Security and Defense Council - the main hawk. He tried to declare a state of emergency in Ukraine and a “general mobilization” for the war against the “cursed Muscovites” even before any decision of this body. In addition to the command, the Maidan was also noted by throwing smoke grenades during one of the sessions of the Verkhovna Rada, of which he was a deputy, which is why he was almost prosecuted on charges of terrorism. Sergei Pashinsky, deputy chairman of the Batkivshchyna faction in the Verkhovna Rada, has already accused Andriy Parubiy of financial uncleanliness in dealing with funds allocated “on the Maidan”. Here is a democratic revolutionary.

Defense Minister Igor Tenyukh, by the way, has already received an official reprimand from Turchinov for “viewing” Denis Berezovsky, also a native of Lviv region. That's where the forge of power personnel of the new regime has moved! At one time he graduated from the Leningrad Higher Naval School named after M.V. Frunze, and in 1994 - the Institute of Foreign Languages ​​of the US Department of Defense. In 2002, he served as commander of the multinational naval exercises Blackseafor. Active participant in the Orange Revolution. He was the initiator and one of the ideologists of the information war against the basing of the Black Sea fleet in Crimea. Being displaced under Yanukovych from the post of commander of the Ukrainian Navy, he expressed particular discontent about the "return" of the Russian language to the fleet. He is a member of the HE "Freedom" O. Tyagnibok.

Mikhail Kutsin, whom Turchinov appointed instead of Admiral Yu. Ilyin as Chief of the General Staff - Commander-in-Chief of the Armed Forces of Ukraine, was born in Transcarpathia. Serving in the army in the Western Ukrainian garrisons, he managed to privatize two service three-room apartments in Rovno and Rawa-Russkaya for his family, as well as a “house for receptions” near Lviv. For this reason, it is on a “short leash” by the radical nationalist forces of Western Ukraine.

Thus, the fascist nationalist O. Tyagnibok, who remained, as it were, in the shadow at the time of the formation of the government, through his people actually controls the entire military bloc of the new regime. And if you consider that Yarosh has already begun to form a new special forces (apparently, to replace the "Berkut"), the picture is even more complete, and the threat of the spread of brown plague is even more real.

Is there a way for the Ukrainian military elite with such people? Do they symbolize the heroic pages stories and should determine the future of the country? Can former Soviet officers, whose grandfathers and fathers shed blood in the fight against Bandera, bow their heads in front of their modern successors? The refusal of loyalty to these people who are able to bring the country to a complete national catastrophe, means not treason, but an oath of allegiance to Ukraine!

Ctrl Enter
Noticed oshЫbku Highlight text and press. Ctrl + Enter
We are
About Stalin and KhrushchevWhat you didn't want to know about England
Military Reviewin Yandex News
Military Reviewin Google News
392 comments
Information
Dear reader, to leave comments on the publication, you must sign in.