Will the radicals be able to stop the Russian spring? 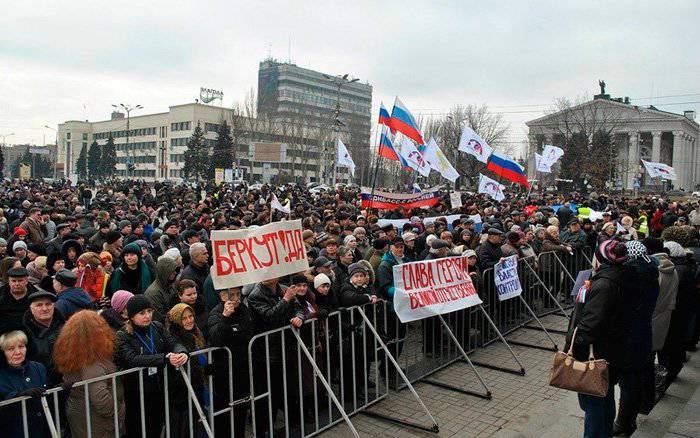 While the number of refugees from Ukraine is growing, entire areas are getting out of subjection to Kiev, and on the streets of the capital itself there are attacks on law enforcement officials, the new Ukrainian government rattles weapons and declares that no one will prevent her from building a “renewed state” in Ukraine. Ukrainian radicals and simply corrupt politicians assure that the situation is under control, and meanwhile quietly panic: how to restore “order” in the country? Individual officers and entire units refuse to serve as couch servicers - no one is attracted by the prospect of sacrificing life for the junta, which, moreover, betray the Russian-speaking officers, at the earliest opportunity.

A number of southeastern regions declared disobedience to the new Kiev authorities. First of all, it concerns the Crimea, where Russians constitute the absolute majority of the population, and do not want to obey the discriminatory rules introduced by the putschists on the second day after the coup. It's time to talk about Crimea as a separate republic: there are self-defense forces on the peninsula, and recently a fleet has appeared.

In Kharkov, the militia managed to free the regional administration building from the “maydanovtsy”, after which the deputies of the Kharkov council decided to self-govern the region. Donetsk and Lugansk regions refused to submit to the Kiev militants, where thousands of meetings were held in support of the autonomy of Donbass.

For the creation of the Republic of Novorossia, residents of Odessa, Nikolaev and Kherson spoke. Unlike Kharkov, the self-defense participants did not have to use force in these cities: there was simply no one to fight. The few supporters of the new government, knowing ahead of time about the preparation of demonstrations, were afraid to take to the streets, and the “maydanovtsy” from Western Ukraine, despite their promises, did not come.

Dnipropetrovsk and Zaporizhzhya regions did not stand aside: mass demonstrations were also there. True, the Dnepropetrovsk and Zaporizhzhya deputies have not yet decided what status their regions need: to join the united south-eastern republic or to seek autonomy while maintaining the independence of the regions? The answer to this question depends on the further actions of the ultra-nationalistic Kiev putschists, as well as on Russia's policy towards the Russian-speaking regions of Ukraine.

“Russian Spring” - a large-scale political action directed against the coup in Kiev, turned out to be a success. In many cities of the South-East of Ukraine over the regional, district and city administrations raised the flags of Russia. Local authorities are in solidarity with the militia, and now make decisions that are beneficial to their compatriots, and not the capital's junta. At the same time, nobody tormented the Ukrainians of the South-East: many of them expressed support for the “Russian Spring”.

Remains of the Soviet Army

The new government of Ukraine, meanwhile, intends to send troops to the Russian-speaking regions of the country - to “restore order”. It is pointless to rely on the Ministry of Internal Affairs: police officers announced solidarity with the people. In the opinion of the Cabinet of Ministers joint with the militants, the “worst” situation is in the Crimea, where Kiev has lost all control levers, and a separate republic is about to be proclaimed on the peninsula.

But the putschists do not have the opportunity to regain control of the south, since the Ukrainian army is broken and demoralized. The combat capability of the Ukrainian armed forces leaves much to be desired: some of the equipment is rusting in warehouses and awaiting disposal, and half of the balance sheet is faulty.

The situation is no better with the morale of military personnel. The officers complain most of all - they are dissatisfied with the low social allowance. Due to lack of funding, pilots and tankers are little practiced; the personnel of the armed forces are being reduced: in accordance with recent reforms, the number of troops in Ukraine was reduced almost four times from 192 thousand to 70 thousand people.

Once the Ukrainian army was one of the strongest. Ukraine inherited a huge military potential from the Soviet Union: state-of-the-art weapons, nuclear missiles, the 700-thousandth army.

What do you think, if the nationalist junta forces the military to shoot at compatriots, will the military comply with such an order? Did the officers forget how Kiev disdained them for many years?

Moreover, the payments to the officers will soon cease: there is no money in the Ukrainian treasury. The newly-minted authorities of Ukraine are perfectly aware of this, and deliberately exacerbate the situation in order to distract citizens from more pressing problems. However, it is not yet known whether this cheap trick with the servicemen of the Soviet school will “give a ride”.

Denis Berezovsky, commander of the Ukrainian Navy, has already refused to cooperate with collaborators' politicians, and said that he is ready to defend the choice of the peoples of the South-East - both Russians and Ukrainians. He was supported by many officers and soldiers who formed the basis of the personnel of the newly created naval forces of the Crimea.

It seems that in the coming days we should expect other unexpected surprises from the Ukrainian military. “Putting on order” in the southeastern regions seems to be the last straw that broke the camel's back. Riots can break out in military units stationed in the central, eastern and southern regions of Ukraine - Denis Berezovsky has already set a personal example, and the psychological barrier can be considered overcome: the self-appointed commander-in-chief Turchinov has no right to use the country's armed forces in the interests of a narrow circle of people - the junta.

Panic in the offices

Turchinov, Yatsenyuk, Klitschko, Tyagnibok and other leaders of the February putsch are perfectly acquainted with the mood prevailing in the army. But they are afraid not only of the Ukrainian military, but also of the Russians: there is a myth in the ruling circles that Russia is about to launch an invasion of Ukraine.

This myth was born from the statement of Russian President Vladimir Putin that Russia is ready to help Russian-speaking citizens living in Ukraine. Under the conditions when Kiev renounced the southeastern regions, and frightens their inhabitants with the introduction of troops, a humanitarian catastrophe cannot be avoided. Russia, Ukraine’s closest partner, should help its neighboring country cope with the crisis.

Entering the Ukrainian army in some areas, an attempt to change the power chosen by the people at rallies by force will lead to bloodshed at the Russian borders. At any time, the confrontation may affect Russia - Kremlin officials are aware of this, and are looking for a solution to this problem.

So far, the introduction of units of the Russian armed forces on the territory of Ukraine is considered as a last resort. This was reported by the speaker of the Federation Council, Valentina Matvienko, who thus attempted to calm the alarmists in Kiev. Is it possible that cornered "hotheads" can take in a fit of fear?

Matvienko also stressed that Russia supports the sovereignty and territorial integrity of Ukraine. However, the citizens of Crimea must decide their own fate without pressure from outside: we all know how the deputies of the Verkhovna Rada stamped dozens of laws per hour under the sights of militants from Svoboda, Right Sector, Spilna spraya. If the same happens in Crimea история, Crimeans can rise to armed struggle against the regime of ultranationalists.

The position of Valentina Matvienko is shared by many other members of the Federation Council. Any ill-considered actions of the Ukrainian junta will lead to the beginning of a large-scale confrontation, the outcome of which is unknown. Worst of all, if extremists and corrupt politicians try to conduct a sweep in the Crimea, the southern and eastern regions of Ukraine, ignoring the will of the people. The only thing that will then save the country from sliding into the abyss of civil war is the refusal of the military to obey the orders of an illegitimate government, their readiness to go over to the people of the South-East.

The outcome of the impending invasion of the south-eastern regions of Ukraine depends solely on the civil position of the Ukrainian officers. Will they stand to protect the interests of the people? Will they try to resist the junta supported in Western Ukraine? Will Novorossia get its own army? Each soldier is obliged for himself to decide by whom to return to his native land — the invader and executioner or the liberator hero.

Ctrl Enter
Noticed oshЫbku Highlight text and press. Ctrl + Enter
We are
Results of the week. "This bad man will betray us at the first danger!"Refugees from Syria. Will Russia accept immigrants from the Middle East?
Military Reviewin Yandex News
Military Reviewin Google News
82 comments
Information
Dear reader, to leave comments on the publication, you must sign in.