When the West is profitable ... 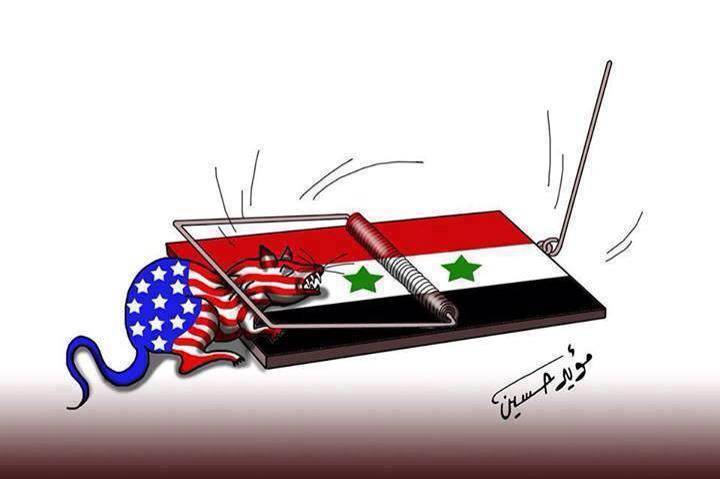 When it is profitable for the West, it talks about negotiations and a “peace settlement”, but when something else is beneficial for it, geopolitical card cheats are silent about the “unacceptability of escalation” and other peacekeeping things. British Prime Minister David Cameron and US President Barack Obama had a telephone conversation during which they called the actions of Russia trying to defend the rights of Russians in the Crimea “unacceptable”. They called for negotiations, for dialogue, stated the need for "de-escalation." But where is this "de-escalation" from their side? In particular, when it comes to the intervention of the United States and Western countries in the internal affairs of Syria?

West allegedly struggling with chemical weapons in SAR. But at the same time, the other day they tried to smuggle a large batch of mustard gas to Syria through Libya. Apparently, the special services of various countries did not coordinate the dispatch with each other, and the gas tanks were confiscated. Libyan general Mansur Al-Mzeini said that the smugglers were detained, while he added that some "responsible persons" from the special services demanded that this dangerous cargo be left alone.

This attempt coincided with the meeting of the Syrian Foreign Minister Walid Al-Muallem with the special coordinator of the joint mission of the Organization for the Prohibition of Chemical Weapons (OPCW) and the UN Sigrid Kaag. They discussed the implementation of the program for the destruction of chemical weapons. During the conversation, Al-Muallem said that Syria had fulfilled its obligations, and called for the politicization of this process to be stopped. Kaag, on behalf of the mission, stated that she appreciates the cooperation of the Syrian government with the OPCW.

However, some forces led from Washington and European capitals still cherish plans for military intervention in Syria. This is not particularly obscure, and Obama himself. To smuggle poisonous substances into Syria, bury them with the help of their puppet militants, then blame the country's leadership for not fulfilling an agreement with the Organization for the Prohibition of Chemical Weapons - perhaps it is this plan that is being hatched by the special services of states interested in anti-Syrian aggression.

In addition, the United States not only does not say a word against Saudi Arabia, which openly intervenes in Syrian affairs, but also condones its actions. It is precisely KSA that is one of the main sponsors of the monstrous atrocities of militants in Syria. Many rich Saudis send huge sums to the accounts of the “Syrian opposition”, while gangsters from armed groups are paid a sickly monthly remuneration.

It is these actions of Saudi Arabia, in contrast to the actions of Russia, that really pose a threat to all of humanity. Of particular danger is the decision of the Saudi kingdom to deliver MANPADS to terrorists. As a result, serious threats to civil aviation. And where is the guarantee that the bandits will be limited only to Syria? The militants themselves declare quite different things - they claim that they are ready to “fight for Islam” all over the world, anywhere. And they are very “successfully” fighting the civilian population of Syria.

So, March 1 terrorists fired two mortar shells in the Christian quarter of Bab Sharqa of the Old City of Damascus. 18 people were injured, most of them women and children. Damage caused.

Not far from the Abbassiin Square, as well as in the metropolitan quarter of Al-Shagur, three people were injured by fragments of mortar shells.

The hospital was again shelled in the city of Harasta, near Damascus. Four patients and one nurse suffered.

On March 2 terrorists attacked a primary school in the town of Djaraman, Damascus, with a mortar. Caused material damage. Fortunately, no one was hurt.

In the province of Deir ez-Zor, bandits attacked the village of Al-Bheiliah. As a result of the shelling, a child was hit in the head, another person was also injured.

In the At-Tame district of the same province, criminals staged a large-scale sabotage on the gas pipeline. 2,5 million cubic meters of gas leaked. The damage to the economy exceeded 200 million Syrian pounds.

And, if the West really wanted peace, it would have paid attention not to Russia's actions, but to its own actions in support of the militants. After all, these militants bombard peaceful neighborhoods almost every day, blow up houses and schools, commit sabotage, and in the territories under their control establish “Sharia orders” that have nothing to do with any “democratic” values.

And the Syrians see the hypocrisy of the West. In the village of Mudadamiya, Damascus province, local residents refused to accept humanitarian aid from international organizations. People said that this help is used for political purposes. They said in an interview with reporters that the Syrian government provides them with everything they need - 7 trucks with bread and other products arrive in Muaddamia every day.

With one hand to provide the inhabitants of the tortured country with humanitarian aid, and with the other to support the gangsters who rob the people of the last piece of bread, deprive the lives of Syrians, make children with disabilities - this is the anti-human policy of those who undertake to decide the fate of the world.