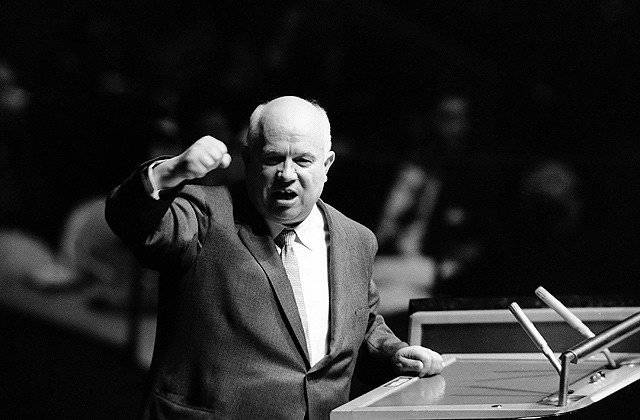 How and why the Russian Crimea, the Soviet leader Nikita Khrushchev decided to donate to Ukraine?

The Soviet people would know both in the Crimea and in Ukraine, that they celebrated the day they laid a real political mine with equal joy and love - Crimea was solemnly presented to the Ukrainian SSR as a gift for the 300 anniversary of the Pereyaslav Rada. In honor of the reunification of the two peoples, Ukrainians and Russians climbed to the summit of Ai-Petri, leaving newsreel cadres to descendants.

Why Khrushchev unexpectedly gave Crimea - a question that then sounded always and everywhere - in Sevastopol, in Kiev, in Siberia, and in the Soviet Baltic. Not finding a logical answer, the people settled on a simple legend: Khrushchev, you see, he himself is Ukrainian, once walking in an embroidered shirt, made a gift to his wife, who is also Ukrainian. In general, he has nothing to do.

“It seems to me that it is equally wrong to perceive Khrushchev as an idiot. On the other hand, it is just as wrong to perceive him as a person who deliberately destroyed the Soviet Union. Maybe he did this partly consciously, maybe he was guided by some kind of ambition, he tried revenge. It is difficult for us to understand this now, but in the actions of Khrushchev there is a large share of stupidity mixed with a large share of betrayal, "noted the historian and writer Nikolai Starikov.

In the fall of 1953, Nikita Khrushchev secretly visited Crimea. Few people knew that he was forced to leave the Kremlin, in which, after the very recent death of Stalin, there was still a rift. Power was essentially collective.

After the departure of the father of the peoples for the role of leader, including Khrushchev, no one pulled, and Malenkov, Molotov, Kaganovich, Voroshilov, Bulganin pulled the blanket. But Khrushchev knew what he was doing. It was after returning to Moscow and arranging a feast, the first secretary of the Central Committee, as they later recalled, drained the second glass of cognac and made a speech: would you give the Crimea region to Ukraine? Only Molotov was against. The rest, being tipsy, did not see a political trick in the proposal.

“First of all, the fact was that he had been serving as secretary of the party’s Central Committee for only half a year and was in great need of help from the largest party organization. It was the party organization of Ukraine. And to a large extent, Crimea was such a badge of its Crimean comrades,” said the director of the Central Museum Tavrida Andrei Malygin.

There were more regional committees in Ukraine than in any other republic, and getting the sympathy of such a huge army of secretaries was expensive. And the Crimea was an all-union dream. The former pearl in the crown of the Russian Empire was now the main facade of the country. Foreign leaders were brought here, the famous Artek thundered here for the entire socialist world. This is not just a camp - the southern capital of the pioneers.

The author of a historical study, Georgy Dezhkin, points out that the then first secretary of the Crimean regional committee of the CPSU (b) Pavel Titov flatly refused to pass it on to Ukraine. He considered the Crimea exactly Russian territory, even once suggested to Stalin to rename the region Tauride. Titov objected to Khrushchev and was dismissed. And the Ukrainian secretaries have already helped the benefactor to come up with a rationale for a quick gift.
"Was историяthat this was done for economic development. But it looks very naive. I would say it is ridiculous, ”said Andrei Nikiforov, associate professor at Tavrichesky National University.

But Khrushchev did not give anyone any time to reflect on the meaning of the transfer of Crimea. 5 February 1954 of the year he launches a draft decree at the level of the Supreme Soviets of the two republics, and within two weeks - that same historical meeting of the presidium.

There was no quorum that day; voices were sent by telegrams. Yes, and in the Constitution there was not a single reservation that would allow the Union republics to legally transfer the territory to each other. But Khrushchev had another motive at all costs to bring his idea to the end. Initially, having conceived to debunk the personality cult of Stalin and condemn the repressions, he concealed that he himself took an active part in the repressions just in Ukraine, and it was possible to buy off the Crimea.

"Khrushchev carried out this accession solely to ensure that some part of the Ukrainian politically active elite forgive his sins committed during the period of repression," said Vitaly Tretyakov, a political scientist, dean of the Moscow State University Television School.

And after 40 years, there was a disconnect, and the Crimea from the once united country had already been transferred to an independent state. Leonid Kravchuk admitted that he was ready to abandon the non-native Peninsula for the sake of separatism of the rest of Ukraine, but Boris Yeltsin in Belovezhskaya Pushcha did not even give a hint at about this. It took another 20 years.

“As our history shows, Russians never abandon theirs. This is a feature of our national culture, our mentality. In this sense, I understand people of different nationalities who are members of a single Russian civilization,” the historian, writer Nikolai Old men

Today, journalists and historians are surprised at the sound of how Solzhenitsyn’s book “Russia in collapse”, published in 1998, actually sounded. “In today's Ukraine, it’s impossible to raise voices for its federal structure, with such reckless generosity adopted in Russia: the ghost of an autonomous Crimea, an autonomous Donbass speaks immediately. We have already forgotten to think about the Rusins ​​of Transcarpathia, with their strong Russian roots. imitate the Ukrainian nationalists. No need to respond to their heated anti-moskal propaganda. You have to wait it out as a kind of mental illness, "wrote Solzhenitsyn.

Today, Russians are being forced to respond. Either because the mental illness of the nationalists in Ukraine has become too acute, or because Russia is no longer in a collapse.

Ctrl Enter
Noticed oshЫbku Highlight text and press. Ctrl + Enter
We are
The hunt for the BlackbirdPopular unrest in the USSR. 1953-1985
Military Reviewin Yandex News
Military Reviewin Google News
22 comments
Information
Dear reader, to leave comments on the publication, you must sign in.