Chinese navy: from mosquito to ocean 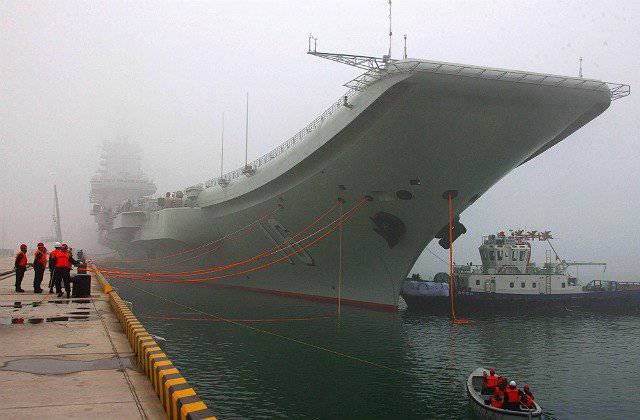 The Chinese fleet, like other types of armed forces (AF), has gone through radical rearmament in the past decade and a half. For example fleet this is noticeably especially good, since this type of aircraft is the most technologically complex, and its construction takes much longer than the ground forces and aviation.

Back in the middle of the 1990's, the PLA Navy consisted of many extremely outdated ships and boats, the latter predominating (that is, the Chinese fleet was almost purely coastal). Numerous submarines differed primitive weapons and very high noise. The surface forces of the PLA Navy were completely composed of ships built on 1950 — 1960-s projects, and far from being the best even by those standards. Their impact capabilities were extremely limited, and air defense and air defense, in fact, was absent altogether.

Over the past decade, the Chinese fleet has gone the way that the US needed at least 30 years, and even managed to get around Russia and Europe in this record-breaking short period, both qualitatively and quantitatively.

The naval component of the Chinese strategic nuclear forces for a long time consisted of one very primitive nuclear submarine with ballistic missiles (SSBN) of the Xia 092 "Xia" with the 12 SLBM JL-1. Currently, four much more modern SSBNs of the 094 Jin Ave (each with the JN-12 2 SLBM) have been built. Two SSBNs of the 094В pr. Are being completed, each of which will already carry an 16 SLBM. All these missiles are monoblock, so the potential of the sea component of the Chinese strategic nuclear forces (SNF), apparently, does not exceed the 50 charges, but will grow.

To replace the obsolete submarines of the Han 091 Ave. (five were built, but two have already been written off), five Subs. Of the 093 Shan Ave. The construction of submarines 095 pr., Comparable in their performance characteristics with the most modern American and Russian submarines.

The Chinese diesel submarine fleet is the largest in the world. The most modern of these are the 10A Yuan Ave 041 PL (sometimes referred to as 039A / B Ave) with an air-independent power plant. The construction of even more modern submarines, 043 Ave, has begun. 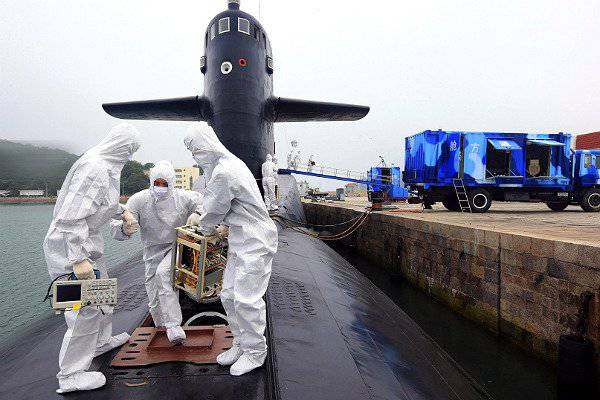 Chinese nuclear submarine in the port of Qingdao.

The only currently Chinese aircraft carrier "Liaoning" is a former Soviet aircraft carrying cruiser "Varyag", acquired by China in the Ukraine in an unfinished state. This ship is not a full-fledged aircraft carrier due to its design features. First of all, we are talking about the presence of a nasal springboard and the absence of a catapult. Accordingly, this ship will forever remain a teaching and experimental, and not a fighting one, just as China has acquired and completed it.

Apparently, China has already begun building its own "full-fledged" aircraft carriers. Aircraft carriers in China will necessarily be built, the best proof of this is precisely the "experimental" Liaoning. Moreover, the aircraft carriers will certainly be at least four, otherwise it is simply meaningless, and China does not like to waste time on trifles.

It should be emphasized that China has already technologically bypassed Russia and almost all European countries in the development of large surface ships and has reached the level of the three most advanced countries in this area - the United States, Japan and the Republic of Korea. This is evidenced by the presence on destroyers of the 052S project (from the third ship) and on the 052D (for all) radar with a phased antenna array and “classical” vertical-type installations of the American Mc41 type. On previous destroyers of the 051 and 052 Ave. (including the first two 052S AEs), Russian vertical-type (UWP) drums were installed, in which only one of the eight missiles are ready for launch at the same time, and these missiles were designed only for one type of missile ( anti-aircraft missiles for C-300F). On the new Chinese destroyers are installed UVP, in which all missiles are ready for launch at the same time, and on destroyers of 052D Ave it can be missiles of different types and classes. On these ships, there is a CPS for 64 missiles. Obviously, it can accommodate HHQ-9 naval anti-aircraft missiles (missiles), DH-10 cruise missiles (CJ-10) capable of carrying both conventional and nuclear weapons, and possibly anti-ship missiles (ASM) and anti-ship missiles (PLUR). This will provide destroyers with the ability to strike both sea and coastal targets, as well as to carry out air defense of naval connections.

The most numerous class of surface ships of the PLA Navy are frigates. Of these, 30 - ships of the project. 053Н, which was built in seven versions. These are 10 frigates pr. 053H3, 4 pr. 053H2G, 6 pr. 053H1G, 1 pr. Another frigate pr. 053HTN is used as a training. Frigates of the project 2Н (except for the most modern modification 6Н053) are gradually being withdrawn from the Navy, some of them being sold to other countries. They have built two frigates of the 1 Ave. to replace them. Now the frigates of the 3A Ave are under construction. 053 ships of this type have already been commissioned (three more are under construction, there will be at least 053 in all). 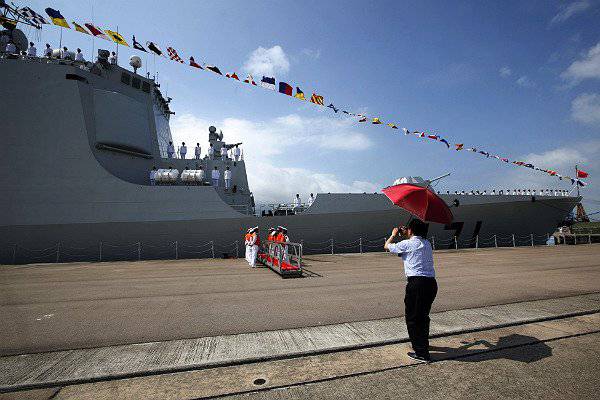 Along with the conventional strike weapons of the PLA Navy (8 C-803 anti-ship missiles in container empty installations - PU), the 054A ships became the first Chinese frigates that had adequate air defense for ships of this class: HHQ-32 16 missiles SAM "Calm"). Due to this, these frigates will become universal escort ships that can be used to protect aircraft carriers near their shores and to strengthen destroyers in the open ocean. In the near future, construction of even more modern frigates of the 055 Ave will begin.

In 2012, the construction of ships of the 056 Ave., which are classified either as small frigates or as corvettes, was started in the PRC. At present, 10 ships of this type have already been commissioned; their total number will be at least 50 units.

Although over the past decade and a half the Chinese fleet from the "mosquito" (coastal) has become oceanic, it remains in first place in the world in the number of combat boats. So, there are 122 rocket boats: 86 pr. 022, 6 pr. 037-II, 30 pr. 037-IG. At the same time, the boats of the 022 Ave are not only the most numerous, but also the most powerful and modern in their class in the world. They are built on the basis of the high-speed catamarans of the Australian company Austal, each carrying eight supersonic anti-ship missiles YJ-83.

In general, the PLA Navy ranks first in the world in the number of diesel submarines, frigates, missile and patrol boats, and amphibious ships (however, in the overall tonnage and capacity of the PLA Navy amphibious ships). By the number of nuclear submarines and destroyers, the Chinese fleet is the third in the world (in submarines and submarines - after the US Navy and the Russian Navy, in destroyers - after the US and Japanese navy).

In recent years, Chinese naval aviation, like the fleet itself, has been radically updated qualitatively, and in terms of the number of aircraft is second in the world after the United States.

The fighters are primarily represented by heavy Su-27 / 30 family vehicles and their Chinese versions. Now, the naval aviation PLA has 24 Su-30МКХNUMX of Russian production, no less than 2 J-14ВН / BSН, which are a Chinese-free copy of Su-11, and six deck fighters J-27 copied from the first version of the deck version purchased in Ukraine -15K. In addition, the 27 modern fighter J-24 and 10 are already quite old J-42. Production of J-8B and J-11 continues, so their number will increase. Production of the J-10 (unlicensed copy of the Su-16) also begins. 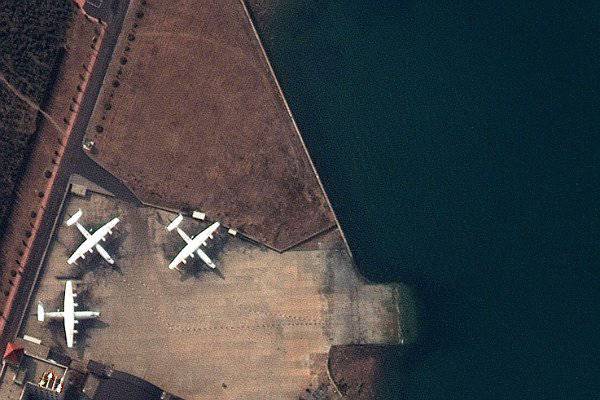 The PLA Navy Marine Corps includes two brigades. In addition to preparing for the amphibious operations, Chinese marines are in the garrison service in the occupied PRC Paracel Islands.

The marines, like the rest of the PLA, are undergoing rearmament. In particular, the family of the Tnur 05 combat vehicles, based on the BMP ZBD-05, is coming into service. One of the vehicles in this family is the ZTD-05 light tank.

In addition to the naval infantry itself, the PLA ground forces, in fact, have their own marines, the 1-i amphibious mechanized division and the 137-i amphibious brigade of the special forces of the Nanking VO.

When will the Chinese fleet catch up with the US Navy?

When discussing the state and prospects of the PLA Navy, it is impossible not to note the unprecedentedly high potential of the Chinese shipbuilding industry, which it is now demonstrating. Currently, six destroyers, four frigates, at least nine corvettes, as well as about 10 nuclear and diesel submarines and at least one DTD, that is, at least 30 units, are being built and completed at shipyards and afloat. Such rates of fleet construction are inaccessible even for the USA; there is simply no possibility for comparison with any other country. The current rate of construction of the Chinese Navy is second only to the American rate during the Second World War, but the ships of that time were incomparably simpler than the current ones.

Even today, the PLA Navy, in cooperation with the Air Force, can ensure the successful seizure of Taiwan, this is not done only for political reasons. China has practically achieved equality at sea with Japan and achieved overwhelming superiority in the surface forces over the Pacific Fleet of Russia. In the near future, the construction of aircraft carriers in the amount of not less than four or five units will begin in China, after which the Chinese fleet will be able to seriously compete with the US Navy in the northwestern Pacific Ocean and the Indian Ocean.