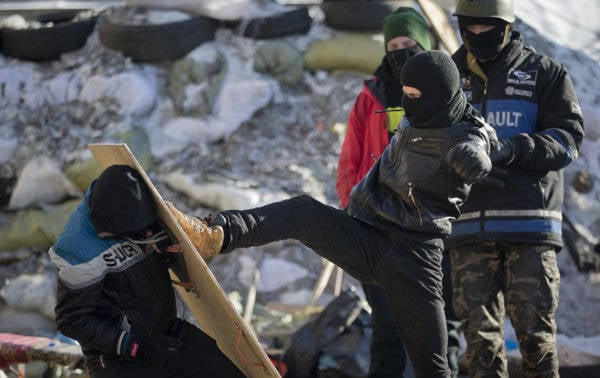 In early February, the Swedish soldier Fredrik Hagberg stood on the podium in the city administration of Kiev, conveying fraternal greetings from Sweden to the crowded Ukrainian rebels, dirty and beaten. The premises were decorated with flags that spoke about the suspicious political convictions of their owners: several Celtic crosses, an unknown flag of Confederation, a banner controlling the building of the political party "Freedom".

But Hagberg talked about more gloomy things: “I am standing here, before the revolutionary forces, to tell you what your future might be if this glorious attempt fails. I stand here as a Swede. However, the country I came from is no longer Sweden. ” Hagberg warned Ukrainians that for the successful continuation of the revolution, it is necessary to chart a path that carefully avoids the evil of abortion and interracial marriage, precluding excessive social support and acceptance of homosexuality as the norm. “Our officials like to call Sweden the most modern country in the world. I tell you, brothers, what awaits you, if you follow our example. Now you have the opportunity to choose and create your own future. Do not fall into the trap by choosing the Western or Russian way. "

It is not clear whether anyone invited him, but he spoke on behalf of the Swedish neo-Nazi group “Northern Youth”, which glorifies “a perfect person who is fighting for something greater and noble than his own benefit; the idealist fighting for Europe’s freedom. ” The group's website greets visitors with a call to help the revolution and support a free Ukraine with a donation. Hagberg is trying to incite his neo-Nazi friends to go to Kiev to build a new pro-fascist Ukraine.

Among the fascists, radical nationalists and racists of Europe, there was considerable concern that the coup in Ukraine was intercepted (if not controlled from the very beginning) by the CIA, the “Zionist occupation government” and the Soros-funded forces. Euroskepticism, characteristic of ultra-rightist movements, caused their rejection of the widely discussed pro-European character of the Ukrainian uprising.

At the same time, supporters of Yanukovich and his allies in the Kremlin actively promoted their vision of the situation (readily accepted by Hagberg and his comrades), suggesting that the protest movement was permeated with dangerous neo-Nazi elements from the extremist parties Svoboda and Right Sector. Thus, Western adherents of the dissenters, for example, John McCain, act in concert with undisguised Ukrainian fascism.

This was a continuation of the Kremlin’s controversy against Western support for the Syrian rebels, which is equivalent to the material support of terrorism conducted by Al-Qaida. And as in the case of Syria - and the civil war in Spain in the past - European extremists rush to the aid of their ideological brethren.

“Immediately upon arrival, we began to discuss with the representatives of Freedom and other nationalists how to help. We want to inform them that we are ready to cooperate in everything - cleaning the streets, security, cooking, ”said Magnus Söderman, neo-Nazi leader of the Swedish volunteers in Ukraine (“ Svenska Ukrainafrivilliga ”).

Potential volunteers are told on the group's website, which is full of stereotyped neo-Nazi propaganda, that “no paramilitary groups are organized; the activity is exclusively peaceful in nature, similar to humanitarian aid. Of course, in the case of the use of physical force, we reserve the right to self-defense. ” At the same time, volunteers are recommended to improve their physical form before going to Kiev. The very existence of Ukraine is under threat, the group believes, and "it is necessary to help the brothers survive and secure the future of white children."

As stated on the newly created Facebook page, a representative of the group recently visited the Parliament and established important contacts with local politicians, apparently from Freedom and the Right Sector. “The participation of foreign volunteers is a good start. I fully support Michael Skilt and other party comrades who are sent to help the brothers in the East, ”said one of the users of the fascist Swedish online forum.

Mikael Skillt is well known in Swedish neo-Nazi circles. This is a representative of the voluntary squad "Stop pedophiles" and a former member of the disbanded fascist associations. Now Skillt is in the neo-Nazi "Party of Swedes", founded by the National Socialist front, which prefers to keep in the background. Her website claims to establish a relationship with Freedom, whose members attended the party meeting a little less than a year ago.

I met Skillt in Moscow, from where he was heading to Kiev for agitation. So why does Ukraine need an international fascist detachment? “We are following the needs of Ukrainians and will help in everything that they need. We have specialists in many areas, from military to truck drivers and journalists, ”Skillt replied. He also somewhat evasively mentioned that he had heard that some Russian nationalists were talking about a revolution inspired by the Ukrainian movement.

So how many people are in this nationalist squad? According to a European journalist who monitors the situation, there is some evidence that not only Swedish neo-Nazis arrive in Kiev. Magnus Söderman also confirmed that "comrades from other European countries are preparing to help, if necessary."

Although most of the far-right groups in Europe shy away from direct assistance to such associations as Svoboda, the community of radical nationalist websites actively supports its claims to power in today's Ukraine. The laudatory article on the website of the far-right British National Party prompted “Polish comrades from the [neo-Nazi] organization Phalanga who visited Ukraine to support Freedom and the revolution. Last year, members of the Polish "Phalanx" visited Damascus, offering assistance to Bashar Assad.

The exact amount is difficult to calculate, but the Swedish authorities do not see a scale similar to the departure of the Scandinavian jihadists to Syria. A spokesman for the Swedish state security service said that "Swedish intelligence services only focus on those citizens who are going to participate in terrorism-related activities in other countries, for example, in Al-Qaida-supported groups in Syria."

Swedish volunteers in Ukraine do not report the number of arrivals or those who are only going to join their “storm troopers' squadrons” in Kiev. Söderman said he didn’t expect large-scale replenishment, because “there are few real men in the modern world”: “12 thousands of Swedes participated in the war between Finland and the Soviet Union - and this is in wartime! And in our times, I will be very proud if there is a 50 man. ”