Sudden inspection of troops of ZVO and TsVO, Northern and Baltic fleets

March 4 2014
14
In the afternoon of February 26, the first sudden test of the combat readiness of the troops was launched this year. This time, the units of the Western and Central Military Districts, as well as some other formations, were alarmed. It was immediately announced that the exercise would last until March 3. In six days, the units were to be shown their skills. As before, a sudden check of readiness will help the military department to find out the real possibilities of the units involved in it and to draw the appropriate conclusions. 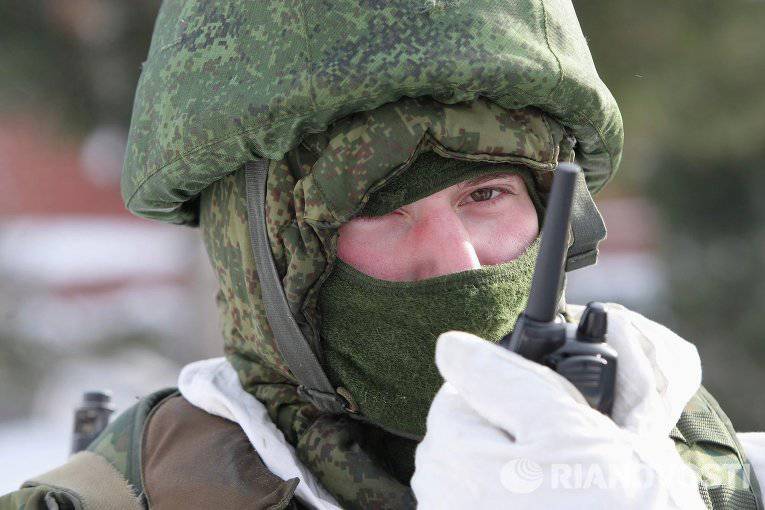 As the press service of the Ministry of Defense reported, the verification was carried out in two stages. During the first, February 26 and 27, the units participating in the exercises were planned to be put on full alert. From February 28 to March 3, the second part of the audit took place, in which units of the Western and Central military districts took part in operational and tactical exercises. The 6th and 20th armies of the Western military district and the 2nd army of the Central military district were involved in the maneuvers. In addition, the test involved the command of the airborne troops, aerospace defense forces, long-range and military transport aviation, Baltic and Northern fleets.

About 150 thousand military personnel took part in the sudden combat readiness check. The events used 90 aircraft, 120 helicopters, more than 850 tanks, 80 ships and vessels, as well as over 1200 units of auxiliary equipment. About two days were allocated for the transfer of personnel with weapons and equipment to the landfills used in maneuvers. Upon completion of the audit, all units must return to their bases by March 7th.

Shortly after the announcement of the start of a sudden verification of combat readiness, the leadership of the Ministry of Defense made several important announcements. The head of the military department S. Shoigu noted that the current exercises are in no way connected with the Ukrainian events. A little later, Deputy Minister of Defense A. Antonov said that the plans for the event had been prepared in advance. In addition, according to Antonov, the Ministry of Defense does not consider that the situation in the neighboring state is the reason for postponing the inspection to a later time. 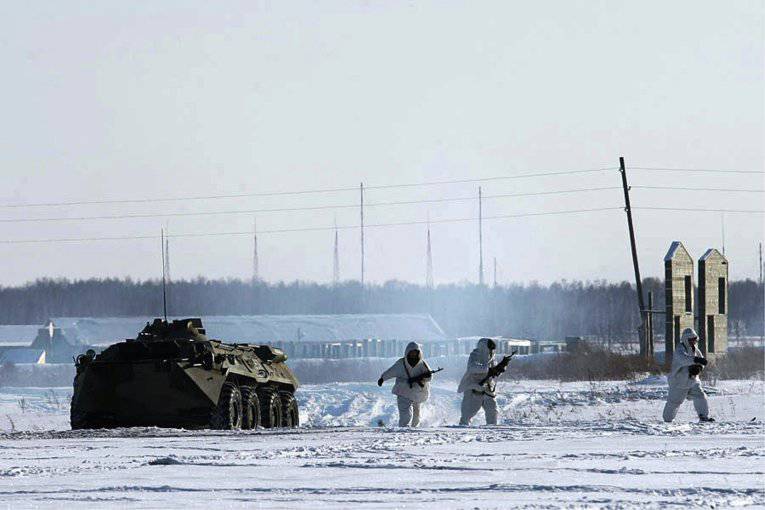 In accordance with the existing agreements, Russia informed the NATO leadership about the planned exercises. As the Secretary General of the North Atlantic Alliance, Anders Fogh Rasmussen, said, the Russian side had warned NATO of the start of verification. In addition, the leadership of the Alliance does not associate training activities with events in various regions of Ukraine.

According to the press service of the Ministry of Defense, after the first day after the announcement of the order to begin the inspection, the overwhelming majority of the occupied units left for the maneuvers. In the transfer of personnel and equipment used railway and military transport aircraft. In addition, the ships of the Baltic and Northern fleets took to the landfills.

On the night of February 28, one of the first combat training operations took place as part of a surprise check of combat readiness. The large landing ship "Alexander Otrakovsky" landed the marines on the unequipped coast of the Gryaznaya Bay (Murmansk region). Fifteen armored vehicles and about a hundred marines at night conditions successfully landed in a given area.

On Friday, February 28, Admiral V. Chirkov, Commander-in-Chief of the Navy, arrived in Severomorsk. At the headquarters of the North fleet The commander-in-chief listened to the reports of the leaders of this operational-strategic association and made several statements. Admiral Chirkov stayed in Severomorsk and began to lead the active phase of exercises in the Barents Sea and off the coast of the Kola Peninsula.

Several episodes of exercises took place in the Barents Sea. So, February 28 small iceberg ship, tug MB-100 and the killer KIL-122 found and released the vessel, captured by a conditional opponent. In addition, a group of rescue vessels began an educational search and rescue operation on the same day. The sailors of the Northern Fleet were to find and assist the conditional victims. 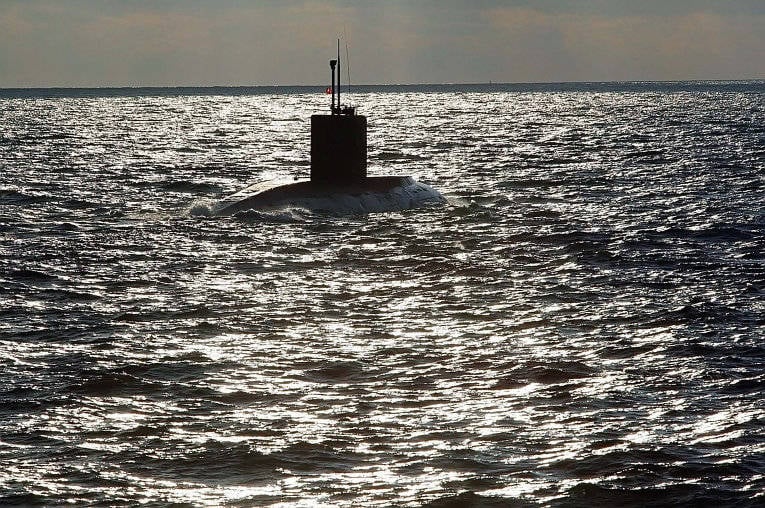 February 28 to the implementation of training tasks started engineering units of the Western Military District. According to the legend of the episode of the exercise, a highly toxic fuel spilled at one of the landfills. The situation is complicated by heavy rainfall, due to which the depth of snow cover has increased to two meters. Within three days of the exercise, engineering units had to eliminate the consequences of the spill, make passes in the contaminated area and adjust the extraction and purification of water in the field.

By Friday evening, the 76-I Guards Airborne Division arrived in the assigned exercise area. For the transfer of units from Pskov to the Leningrad region, 60 helicopters of several types and 20 military transport aircraft IL-76 were used. Having arrived in a predetermined area, the 76-I Guards Airborne Division began to equip a temporary deployment center.

March 1 ships of the Northern and Baltic Fleet received similar training tasks. The sailors and pilots of the Northern Fleet were to find the submarine of the conditional enemy and make it float using depth charges. According to the Ministry of Defense, during this stage of the maneuvers, Tu-142 and Il-38 aircraft and Ka-27PL helicopters were to find a conditional enemy and transfer information about it to anti-submarine ships. The Brest and Snezhnogorsk ships were involved in the submarine detection operation.

In addition, on Saturday, ships and naval aviation of the Baltic Fleet were involved in the training anti-submarine operation. According to the task, the sailors and pilots were to detect the submarines of the conditional enemy and track their movements. By evening, small anti-submarine ships "Kalmykia" and "Aleksin" attacked the conditional enemy and successfully destroyed it. 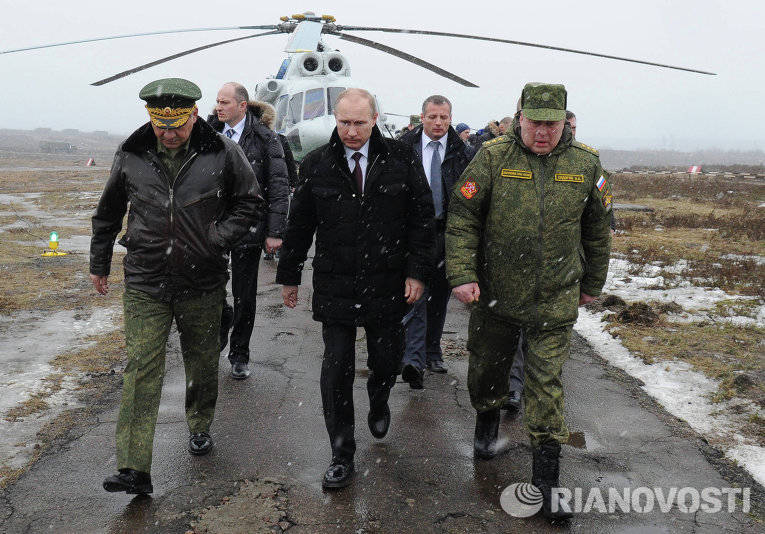 On the same day, the Baltic seamen liberated the vessel seized by a group of "pirates". Unknown vessels of the conditional enemy blocked the vessel, which came to the aid of the ships of the Baltic Fleet. The blocked vessel and the conditional enemy were detected by naval aviation helicopters. Helicopters reconnoitered the situation and opened warning fire. The ships that arrived at the scene of the training incident demanded that the invaders surrender, but they refused. The warning fire from large-caliber machine guns and 30-mm anti-aircraft guns put an end to the conditional capture of the vessel.

On Saturday, a conditional intruder appeared in the airspace of Karelia. The aircraft flying with the identification systems turned off and observing radio silence was detected by ground anti-aircraft defense equipment, after which Su-27 fighter jets rose to intercept. The fighters approached the conditional intruder, after which they forced him to follow them to one of the airfields.

2 March, the press service of the Ministry of Defense told about the success of military communications. To provide communication and control of troops at all levels, a single autonomous multi-level data transmission system was created. This system included all units engaged in a sudden test of readiness. With the help of a deployed communications network, interaction between the units of the Western and Central Military Districts, the Northern and Baltic Fleets, the aviation command and other associations was ensured.

On Sunday, in the Arkhangelsk region, a field hospital of the Podolsk medical special-purpose unit was deployed. Before deploying the hospital, military doctors overcame a path that was over 800 kilometers in length. First, they arrived at the Chkalovsky airfield, located more than 70 km from the place of permanent deployment. Then, six Il-76 military transport aircraft transferred about fifty military medical personnel and 15 units of special equipment to the Arkhangelsk region, after which the medical team had to travel a few more kilometers to the place where the hospital was deployed. According to the introductory exercise, employees of the Podolsky medical special-purpose detachment were to assist the conditional victims of a man-made disaster.

Also on March 2, maneuvers took place at the Shary (Kola Peninsula) training ground. A separate motorized rifle brigade of the coastal forces of the Northern Fleet successfully organized the defense and took upon itself the blow of a conditional enemy. Over 500 military personnel and a few dozen pieces of equipment were able to stop the advance of the enemy and, leading a maneuverable defense, lure him into a fire bag. Artillery and tank units with massive fire completed the rout of the conditional enemy. During this episode, the military had to operate in the Arctic, which, among other things, led to the need to equip trenches in permafrost.

In the course of a sudden check of the combat readiness of the troops, great attention was paid to the moral and psychological state of the personnel. Thus, the military received a set of checklists, which describe methods of increasing attention and efficiency, as well as getting rid of a stressful state. The agitation and propaganda brigades of the houses of officers of the Central Military District took part in increasing the morale of the formations participating in the exercises. For several days, the brigade gave four concerts. Assistant commanders for work with religious servicemen were involved in the work with the personnel. Finally, items began to work in military camps, providing various assistance to the families of soldiers and officers.

March 3 began combat training at the Baltic Fleet testing grounds in the Kaliningrad region. The coastal forces of the Baltic Fleet used all available types of rifle weapons, rocket launchers, etc. In addition, the crews of infantry combat vehicles BMP-2 and T-72 tanks, calculations of artillery guns, self-propelled guns and multiple rocket launchers participated in the shooting. The coastal forces of the Baltic Fleet trained to destroy enemy personnel and equipment. The training activities of ground units supported aviation.

At the Baltic sea test sites, the ships fired at surface and air targets using barreled and rocket weapons. Also, the ships of the Baltic Fleet trained in the formulation of minefields and the use of depth charges.

The current surprise check of the combat readiness of the troops has become another similar event in the past few months. For example, last summer, military personnel from the Eastern Military District took part in similar exercises. The practice of conducting surprise checks is well established. Such events allow not only to arrange training of personnel in the conditions of the landfill, but also to check the level of its training. In addition, the sudden announcement of a combat alarm and the transfer of troops to landfills located away from their permanent bases, helps to check the capabilities of several types of troops simultaneously.

The result of previous surprise inspections of troops was a series of measures aimed at increasing the capabilities of some units. According to the results of the current exercises, the Ministry of Defense will again draw the appropriate conclusions and take the necessary measures. In the meantime, the main task is to return units to their bases. As reported in the early days of the inspection, the military and equipment will return home on March 7.

Ctrl Enter
Noticed oshЫbku Highlight text and press. Ctrl + Enter
We are
The action “Military service under the contract is your choice!” In Rostov-on-Don: future contract servicemen, exhibitions and “Russian Knights”Completed a surprise check of the troops of the Central Military District
Military Reviewin Yandex News
Military Reviewin Google News
14 comments
Information
Dear reader, to leave comments on the publication, you must sign in.