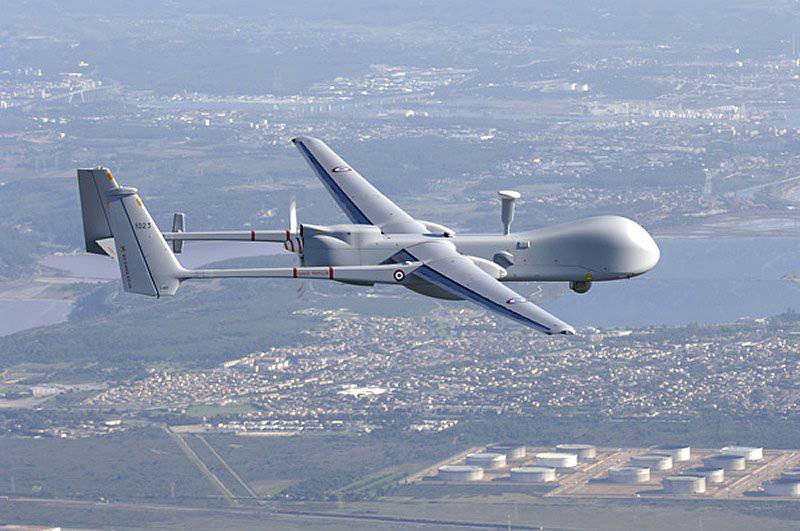 16 February this year The Los Angeles Times reported that the Barack Obama administration is working on plans to deploy unmanned aerial vehicles (UAVs) at air bases in Central Asia to attack targets in northern Pakistan and Afghanistan. The program is said to be of an auxiliary nature in the event that Washington and Kabul do not agree on the fate of some US military facilities in Afghanistan.

At first glance, the publication of essentially secret information about military plans in one of the largest American newspapers looks like a regular informational stuffing for influencing Afghan President H. Karzai. However, the threats posed by the appearance of unmanned aviation The United States in Central Asia is being forced to take the Los Angeles Times data seriously, giving them a comprehensive assessment.

Anonymous newspaper sources in the government do not name the state of Central Asia, in which drones are supposed to be placed, however the technical and tactical characteristics of UAVs in service with the US allow us to conclude that the Americans want to transfer them to the airfields of Tajikistan and southern Uzbekistan... They are closer to the potential targets, which is important, since the main American UAV MQ-1 Predator (Predator) has a limited flight range (740-930 km).

According to American experts, the possibility of using the infrastructure of Tajikistan could be discussed with the leadership of this country in January 2014 during a visit to Dushanbe by the commander of the special forces of the US Central Command, Major General Mikael K. Nagata. True, as Western analysts themselves admit, if such negotiations did take place, the likelihood of Dushanbe’s agreement on the American proposal is insignificant, given that it would jeopardize allied relations with Russia, including a major program of re-equipping the Tajik army.

More promising in this regard may be contacts of Washington with Tashkent. Before the closure of the airbase in Khanabad in 2005, the United States had already used the territory of Uzbekistan to carry out UAV flights. Today, Uzbekistan is once again the main military-political partner of the United States in the region and is preparing to receive from them some of the weapons from Afghanistan. Including in February 2013, the State Department announced the US intention to supply unmanned vehicles to Uzbekistan (presumably reconnaissance versions).

From about 2007-2008. The Pentagon began re-equipping its units with the new MQ-9 Reaper UAV (Reaper), which, in comparison with the Predator, has a more powerful turboprop engine, weapons comparable to an Apache army helicopter, and an increased range of 3700 km. With such characteristics, a new drone can strike targets in Afghanistan and Pakistan from the territory of more distant countries of Central Asia (Turkmenistan, Kazakhstan, and Kyrgyzstan).

Turkmenistan officially opposes the creation of foreign military facilities on its territory, although it is secretly ready to go into military cooperation with Washington (in particular, in 2003, it opened airspace for the US Air Force). However, Iran, the key economic partner of Ashgabat, will strongly object to the deployment of American UAVs in Turkmenistan. In December, the Iranians intercepted the top-secret American drone RQ-2011 Sentinel, created using stealth technology, after which it became obvious that the White House was actively using the capabilities of unmanned aircraft to gather intelligence about Iran.

As for Kazakhstan and Kyrgyzstan, they recently ratified the Protocol of the CSTO of December 20 2011, according to which the decision to deploy troops and military infrastructure of non-CSTO states on its territory can be made only after consulting with Russia and other members of the organization, in the absence of recent official objections.

Consequently, Uzbekistan may prove to be the most convenient platform for the US UAV base in Central Asia, despite the fact that after the Andijan events between President I. Karimov and Washington, mutual distrust remains. At the same time, the appearance of such an object on the territory of Uzbekistan will have a negative impact on the international image of the country, which has provided its territory for US drones, given that the number of opponents of uncontrolled use of this type is growing rapidly weapons. According to the British Investigative Bureau of Investigations, from 2004 to 2012 a year in Pakistan alone, no less than 880 civilians, including 176 children, were killed by UAV air strikes. Numerous victims of drones among civilians served as a pretext for the start of an investigation within the framework of the UN in 2013.

Placing a UAV in the region will inevitably lead to a worsening of the relations of the country that does this - with Russia, China, Iran and Pakistan, as well as with neighboring countries of Central Asia. For example, the appearance of a US-based UAV station in Uzbekistan, as well as their transfer into the ownership of the republic, will increase tensions in Tashkent’s relations with Tajikistan and Kyrgyzstan, which have long been concerned about Uzbek air superiority and in response seek to strengthen their own air defenses with Russia’s help. Kazakhstan is also experiencing anxiety. In February, an unidentified drone, which had flown around two border guards in the area of ​​Beineu, invaded the airspace of 2012 from Uzbek territory.

The United States Central Asian UAV fleet will operate under strict secrecy, outside of any national or international control, as it is likely to become part of the CIA forces ... It is the CIA, and not the Pentagon that is currently overseeing the strikes of UAVs in Pakistan. For the defense department, such operations require the permission of the local government, which Islamabad does not give. It cannot be ruled out that later the Americans will transfer covert operations using UAVs to the territory of the countries of Central Asia without the consent of their leadership. The list of such events is already quite extensive and includes intelligence; analysis of the radiation, biological and chemical environment; launching rocket-bombing strikes against ground targets, including for the elimination of unwanted leaders (essentially, contract killings).

The deployment of drones in Central Asia will require a noticeable expansion of the US military infrastructure here: the involvement of US military personnel to maintain and protect valuable equipment, the installation of sophisticated electronic equipment, the real purpose of which will be problematic. The work of the UAV assumes the presence of an agent network in the areas of operations for targeting and support from manned aircraft.

In the future, the point of the UAV may be close in value to a full-fledged air force base.. Already, in the United States are studying the possibility of using drones to supply troops, throwing and evacuating amphibious groups, refueling in the air. A new class of unmanned combat air vehicles is being developed that can attack aerial targets. Prototypes of jet drone Avenger UAV ("The Avenger") are being tested.

The implementation of the US administration’s plans to deploy drones in Central Asia will lead to the expansion of the US military infrastructure here, create conditions for the spread of clandestine operations using drones to the region and increase the overall military imbalance in the region.

Ctrl Enter
Noticed oshЫbku Highlight text and press. Ctrl + Enter
We are
Afghanistan and Pakistan are US alliesBattle without a win
Military Reviewin Yandex News
Military Reviewin Google News
8 comments
Information
Dear reader, to leave comments on the publication, you must sign in.