March 4 2014
203
One of the main News the week, which many media associate with the situation in Ukraine (especially in Crimea), is the depreciation of the Russian ruble against the euro and the dollar. On Monday March 3, 2014, the ruble dipped against these currencies to their historic low. So for the dollar at the end of trading on the exchange they gave 36,37 rubles, and for the euro - more than 50 rubles (to be more precise - 50 rubles. 15 kopecks). The transition of the euro through the "psychological" mark of 50 rubles made experts say that the whole thing is in the development of the Ukrainian scenario. Like, if the position of Russia was more restrained, today the ruble exchange rate could be much higher. And so, they say, the ruble falls against world currencies according to true economic laws, read, completely objectively ...


The ubiquitous American Secretary of State John Kerry added fuel to the fire, saying something from the category of near-political and near-economic esotericism:

The ruble is already falling, anticipating the consequences of international sanctions. 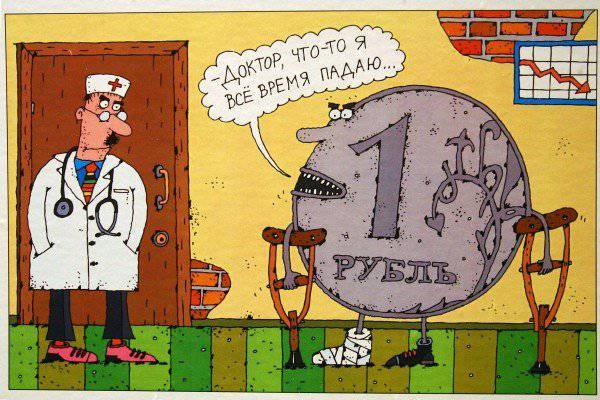 The opinion of experts that the ruble could be significantly stronger if not for the “series of decisions of the Russian authorities on Ukraine” would certainly be interesting. The situation in which the Ukrainian ruin affects the ruble one way or another is quite understandable. But it is only somewhat strange that economic experts write off problems with the ruble exchange rate solely on Ukrainian perturbations. The fact is that the ruble against the euro and the dollar began to fall not yesterday or even the day before yesterday. The beginning of the fall came at a time when the new “Maidan” (at least openly) was out of the question.

To understand this, it is enough to look at the dynamics of the rate of the Russian currency in relation to the US currency, starting from the end of January last year. January 28 The 2013 ruble against the US dollar was at the exchange rate mark of 29 rubles 99 kopecks. Until 1 April 2013, the dollar rose to 31,62 rubles. for a unit. Next - a small acting out positions ruble to 30,93, after which - a new fall. Then - a few more "roller coasters" - and the fall continues to this day.

It turns out that the sinking of the Russian currency began a few months before the announced on “the cause of all ruble troubles” performances on the Maidan and all the events that followed them started.

In this situation, economic gurus are again included, stating that since the beginning of Russian political activity on the situation in Ukraine (in Crimea) the angle of the fall of the Russian ruble has become more acute. Like, before that, if the ruble was devalued, it was only “smoothly”, but now, you see, objectively broke through.

Well, if this is considered an “objective situation in the economy,” then it would be interesting to mentally transfer to the April-May 2012 of the year. The then dynamic suggests that in only one month the ruble managed to lose 15% of its value immediately. It would seem that there is no connection between the current level of the fall of the Russian currency and its then 15% subsidence. But this is only at first glance. If we pay closer attention to April-May 2012, we can recall that this is the very period of time when the “swamp” opposition splashed saliva in the streets and squares about preparations for the inauguration and the very inauguration of President Vladimir Putin. The famous rally of 6 in May and its consequences ... This is where a certain connection emerges with the Ukrainian events and “their” influence on the exchange rate.

That is, the situation looks approximately as follows: if the direct, say so, the owners of those very “world” currencies (euro and dollar) want to support by their own forces, trying to ruin, for example, the constitutional order in the Russian world (in the broad sense of the word) then the most “most objective” economic process is activated, which leads to a sharp subsidence of the Russian currency to the American currency. Someone after that still believes that the world economy is regulated exclusively by an unbiased, independent market? ..

If this is the case, then in the economics textbooks it would be time to write down the following in black and white: the dollar and the euro are instruments of influence (attempts to influence) of the western economy on economic and political life in different regions of the planet. Let's call things by their names. And then the market, you know ... State non-interference ... Yeah ...

In such a situation, those who are confident that the current situation is the absolute collapse of the Russian ruble can be attributed to a special class. Either these people for some reason were not used to getting acquainted with changes in the exchange rate in a more extensive retrospective, or “all-pro-prodadism” struck the brain of representatives of this class irreversibly. It is strange to hear a person who, in an interview, states that now, they say, his purchasing power will decrease, you see, just because Russia “got in” with its opinion on Ukraine ... That is, the message is this: if we continued to chew snot and once again they threw their brothers (now in the Crimea), then the Eurocurrency would now cost not half a quintal odd, but “only” rubles, so 46-47 ... A man is killed, that now he will have to refuse french fries in McDonalds, but “Get by” just double something there like “big maca” or “po nn cheeseburger ", because purchasing power and so on ... Man tearing his hair out because a ticket to the Maldives, whether risen see.

If for such a person the price of the safety of another person (even if the same average Crimean citizen) is less than the cost of a sandwich or a momentary rise in price of a trip to a hot country, then such a gentleman can only be regretted because the idea of ​​total consumption finally celebrated a victory over him, over his common sense. But lately, we have formed quite a few groups of people for whom the fear of missing something in consumer terms is in many ways above human conscience.

However, it is worth returning to the tendency of the Russian ruble to fall. As already noted, the fall did not start at all from the moment of the fire on the Maidan (during this fire the fall only worsened). A drop, by the way, with far from cheap oil (today they give about 110 dollars per barrel). Could such a decline in the national currency be beneficial to someone inside Russia itself? It may even be. If we take into account that the Central Bank, to put it mildly, is not in a hurry to take effective steps to stabilize the course in the presence of those impressive levers that the Central Bank has for this a priori, then we cannot exclude that there are “comrades” interested in devaluation of the ruble on this side of the border . At least in the government, they react very restraint to the actual depreciation, which has been going on for over a year now. Why would it ... It turns out, as always, one of two things: either the government is not able to cope with economic challenges, or not to cope with them - this is the main task of the Cabinet of Ministers today ... but here it looks like a "fork".

Ctrl Enter
Noticed oshЫbku Highlight text and press. Ctrl + Enter
We are
New plants and workshops in Russia in 2015 yearResults of the week. "Such a diamond is in such a dung ..."
Military Reviewin Yandex News
Military Reviewin Google News
203 comments
Information
Dear reader, to leave comments on the publication, you must sign in.