Ukrainian choice: between Nazism and independence 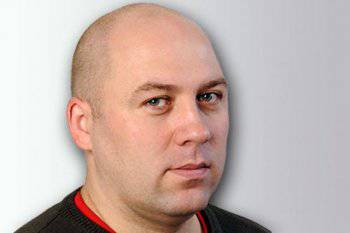 Behind the "red line"


The world community and the liberal public are surprisingly predictable. Someone doubted that Russia's imperial ambitions would be declared the main cause of the Ukrainian crisis?

To look at those who are wringing their hands today and groaning: “Russia, stop, do not need a fratricidal war!” Is impossible without disgust, as it is impossible to look without disgust at actions in support of a serial maniac.

Both the West, and the new Ukrainian authorities, and our liberal "peacekeepers" stubbornly ignore the main reason for Russia's tough response.
For many years, Russia quietly accepted what was happening in Ukraine, even when openly hostile forces came to power there and did not forget to trade for theft of gas.
However, this time something happened, after which an extremely harsh reaction became inevitable.

Ukraine crossed the “red line”, in fact legalizing the right-wing Nazi militants. The militants, whose leader, Dmitry Yarosh, openly declares that he is planning sabotage and rejection of territories from Russia. It is also worth recalling that many of the members of the “Right Sector” managed to make war against the federal forces in Chechnya.

That is, in fact, we are talking about the fact that with the full consent of the West and the Russian liberal public in Ukraine, the “Ukrainian Shamil Basayev” is legalizing, which is preparing Russia for a new Beslan and a new “Nord-Ost”.

It is clear that Viktor Shenderovich, Zemfira and Yuri Shevchuk don't give a damn about it - ordinary citizens usually take hostages, and not those who have elevated themselves to the rank of "nation's conscience".

But the whole thing is that a normal state should nip in the bud potential threats to the lives and health of its citizens.

Imagine for a moment that the supporters of the Al Qaeda movement would be the shock force of a coup in Mexico, and then they would join the government and openly make plans to create an Islamic caliphate in California and Texas. What do you think will be the reaction of the US authorities to such events?
I believe that it will be lightning and much tougher than the reaction of Russia to what is happening now in Ukraine.

Russia does not want war, as the Soviet Union did not want it in 1941. But when armed Nazis appear on your borders, there is almost no choice. This Nazi reptile must be destroyed before thousands of innocent people fall into its victim.

Ukraine actually has a way to avoid the worst case scenario. But it does not consist in writing numerous tearful letters to Russia and the UN.

In the 1944 year, the Finnish authorities suddenly discovered that in the 1941 year they got very excited about getting involved in the war on the German side. By that time, the Soviet Union had turned the tide of the war and was driving the Nazi aggressors to the West. The military situation of Finland itself has become extremely difficult. In fact, the Finnish troops from the complete defeat saved only the fact that the Finnish direction for the Soviet command was still considered secondary.

Nevertheless, the Finns understood that this could not continue for a long time, and soon their stubbornness would end up raising a red flag over Helsinki.
Therefore, they were actively negotiating, which should have allowed them to withdraw from the war, while maintaining their independence.

Contrary to modern ideas, Joseph Vissarionovich Stalin was not at all eager to hang on the Helsinki lamps all the Finnish politicians and military who participated in the siege of Leningrad and who were outraged in Karelia. Therefore, the parties were able to reach an understanding, with the exception of one point.

The Soviet Union insisted that Finland should not only sever all relations with Germany, but also secure the withdrawal of the Nazi troops on its territory. If the Nazis stupid, the Finns were asked to solve the problem by force.

Finnish politicians have tried to explain that the Germans are strong and terrible, and it’s not easy to deal with 200 000 fighters of the Wehrmacht.

To which the Finnish side was asked: what are you afraid of more - the Nazis or the loss of independence? The answer to this question was the so-called Lapland War, which the Finns waged with Nazi Germany from the moment of the conclusion of an armistice with the USSR until April 1945.

The war that saved not only independence, but also the honor of the Finnish people.

If Vitali Klitschko, Arseniy Yatsenyuk and other Ukrainian leaders want to save the honor of their country, they must immediately submit an ultimatum to the "Right Sector" to disarm all its militants during 24 hours and immediately unblock all the institutions they employ. All militants guilty of atrocities should be brought to justice, and the Nazi organization itself, together with its leader, should disappear from Ukraine’s political life once and for all.

If the “Right Sector” refuses to fulfill such conditions, then the new Kiev authorities should force the militants by force.

Finns in 1944 had the sense to make the right choice. Will Ukrainian politicians be crazy?

Ctrl Enter
Noticed oshЫbku Highlight text and press. Ctrl + Enter
We are
Strategy and tactics of the "Right Sector"A terrible choice of Ukraine. Why Dmitry Yarosh is the president she deserves
Military Reviewin Yandex News
Military Reviewin Google News
94 comments
Information
Dear reader, to leave comments on the publication, you must sign in.