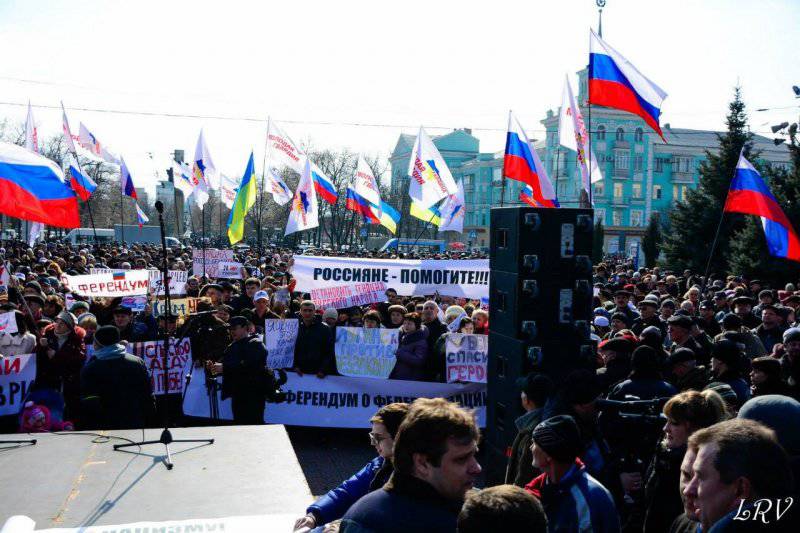 The center of resistance of the South-East of Ukraine today, 2 March, has moved to Lugansk. If yesterday they simply rallied here, today the local authorities refused to recognize the legitimacy of the “central authorities”.

So, the events in Lugansk began with a rally at which thousands of local residents came out in defense of the Russian language and support for federalization. By the tradition of the last days, flags of the Russian Federation were hung on several administrative buildings in the city center.

In parallel, the Lugansk Regional Council held its session, which was attended by people's deputies of Ukraine, representing the region in parliament. On the agenda one question was one and only question - about the socio-political situation. The session resulted in the following decision:

In addition, the deputies of the Luhansk regional council supported the initiative of the meeting participants to collect signatures for an all-Ukrainian referendum on the federal structure of Ukraine, demanded that the Verkhovna Rada "in the shortest time to give Russian the status of the second state in Ukraine", immediately take measures to disarm all illegal armed groups, to stop politically motivated prosecution of internal troops, police officers and the Berkut unit, associated with the performance of their duties during riots.

Also in Lugansk they demanded a ban on political parties and public organizations of a pro-fascist and neo-Nazi persuasion, violating the legislation of Ukraine, and bringing to criminal responsibility those guilty of inciting ethnic hatred.

In case of non-compliance with the requirements, further escalation of civil confrontation and the emergence of a direct threat to the life and health of the population of the Luhansk region, the deputies reserved the right to ask for help from the Russian Federation.

And in fact, immediately after the decision of the Luhansk Regional Council, Kiev announced the appointment of Mikhail Bolotskikh, former head of the State Service of Ukraine for Emergencies, to the post of governor of the region. However, local activists said that whatever Kiev would decide for itself there, the new illegally appointed governor would simply not be allowed into the regional state administration.

In the evening of March 2, oligarch Sergei Taruta was officially appointed by the putschists from Kiev as governor of the region.

At the building of the Donetsk regional administration, a rally of citizens continues, and immediately began collecting signatures of the population for holding a local referendum on the future of Donbass - the city council adopted the corresponding decision yesterday. Rallies are generally peaceful.

“Today’s Donbass Patriotic Forces” are recording those who want to join the people's militia, which will rebuff the radicals if they appear in the region. The recording, curiously, goes to the office of the Donetsk regional organization of the Party of Regions. According to the headquarters, only in the morning, about 500 people signed up for the people's militia.

Today, the main oligarch of Ukraine, Rinat Akhmetov, made a statement calling on politicians and the authorities to do everything to “ensure territorial sovereignty, restore democracy and the inalienable rights and freedoms of citizens.” He also appealed to business circles in Ukraine and business partners of Ukrainian business with an appeal "to unite efforts and promote a peaceful settlement, not sparing any material resources." “The SCM Group, which today numbers 300 thousands of people and represents Ukraine from the west to the east, from the north to the south, will do everything possible to preserve the integrity of our country,” the owner concluded.

Killed one of the active defenders of the monument to Lenin - 65-year-old Maria Blomerius. Companions noted that the woman was known for a clear position in life, worked with young people in the “Together-Forward!” Social movement. Militiamen found a body with numerous stab wounds, it was not difficult to find out its address, believe like-minded people killed.

As for the “euromaidan” militants injured on the eve of the mayor's office, the city first shook up a statement about two dead at the hospital after the storming of activists. However, almost immediately, the deputy mayor of Kharkov, Svetlana Gorbunova-Ruban, categorically denied this information. Misinformation, in short.

The city also actively discusses the “information” that was thrown in through the media with reference to one of the deputies that the day before more than two thousand Russians arrived in Kharkiv by bus from the Belgorod region, which, de, became the main driving force of events, and the citizens themselves are not with what But there is no clear evidence - for example, statements from the border service, which could shed light on the state of things - no.

Local activists from the Southern Front organization blocked traffic on one of the highways in order not to miss the military equipment of the Ukrainian army in the Crimea. In the evening of March 1, a group of activists blocked the checkpoint of the 79 th separate airmobile brigade. However, the military said that a group of paratroopers had to go to the city of Voznesensk of the Nikolaev region to strengthen the protection of military warehouses, they were also going to use for the protection of a number of objects in Nikolaev itself - but in the end no one went anywhere.

Here the key event of the day is also connected with the communication of the people and the military. So, in Odessa, a motorcade of 60-70 vehicles was formed, which went to a nearby large military unit to find out who the military is supporting: the people or the illegitimate power in Kiev. The rally took place under the flags of Odessa and Russia, as well as the Victory Signs and the slogans “Odessa, bolder, drive Bandera in the neck”, “Odessa is a hero-city”, “Fascism will not pass,” “Berkut” and “Russia”.

It is reported that the commander of the 28-th separate Guards Mechanized Brigade assured the rally participants that no one had led to any part of the combat readiness. The military unit is in normal normal condition, all soldiers are on the ground, they will not go against the people and weapon will not reach. The commander also said that he and the part under his control with the people, with the inhabitants of Odessa.

The newcomers demanded that the commander decide who the supreme commander-in-chief for him was President Yanukovych or the acting president. President Turchinov, but there was no clear answer to the directly posed question. The rally participants began to defend the commander and say that he cannot answer such a “provocative question” and “can be shot for it.”