The Legend of Makarov

It fell into a steep whirlpool.
Let, as in the wilderness, everything will freeze all around,
To him in silence giving glory!
Ishikawa Takuboku, "In memory of Admiral Makarov"

There is a monument on the main square of Kronstadt. From the high pedestal, on which the gilded inscription “Remember the war” is knocked out, the broad-shouldered admiral looks towards the sea, stretching out his hand forward. This is a monument to Stepan Makarov, a talented navigator, whose name is inextricably linked with the Russo-Japanese War. His death in 1904 was an irreparable loss for the Russian fleet. 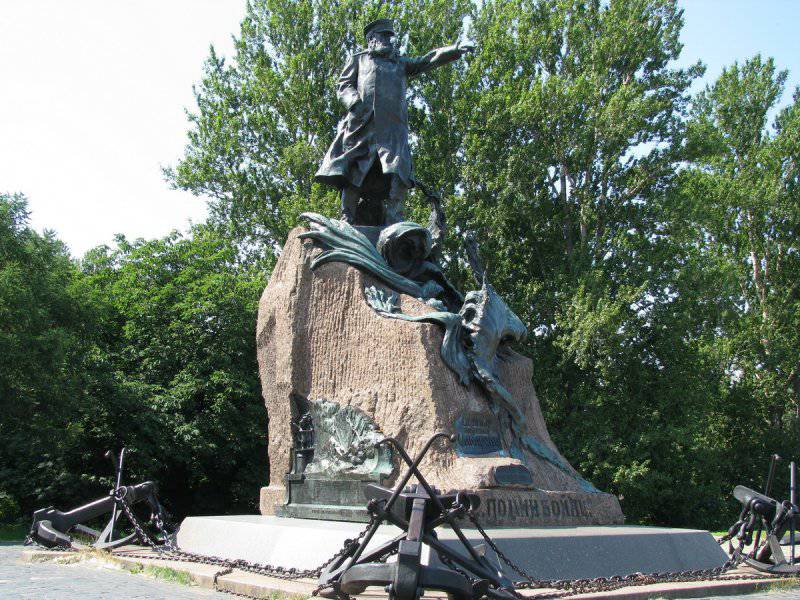 Could one person influence the course of the Russian-Japanese war? Many historians believe that if Admiral Makarov had not died, Russia would have had a chance of winning the war. However, there is also an opinion that Makarov’s achievements are somewhat exaggerated, and even if he survived, the problems in the military system of that time were too great for one person to cope with them and lead Russia to victory.

Stepan Osipovich Makarov was born in 1848 year. His father served in the training fleet crew, and his son, following the example of his father, entered the Naval Naval School of Nikolaevsk-on-Amur. Although Osip Makarov did not pay too much attention to the children, nevertheless, Stepan adopted from his father such qualities as curiosity and responsibility in performing his work, discipline, diligence and love for the sea.

According to the established tradition of the Nicholas School, the junior Cadets were fully placed in the care of their elders, on the part of whom they endured all kinds of mockery. The elders even had the right to punish the younger ones. According to Makarov, seniors could force the little ones to do anything for themselves, they were not allowed to rebuke. In the past, such orders reigned in one form or another in almost all men's educational institutions, especially provincial ones. However, Makarov himself from an early age did not allow himself a bad attitude towards the younger ones. The school played an important role in the life of Makarov. He was on friendly terms with many teachers, received books from them. Rumors of a diligent student reached Rear Admiral P. V. Kazakevich, who appointed a young cadet to the Pacific squadron under the command of A. A. Popov.

At that time, only noblemen had the right to occupy command positions in the fleet, and noble surnames. Natives of non-titled noble families, with rare exceptions, could not climb the corporate ladder, despite all their merits or abilities. Appointment to a post most often depended on kinship or familiarity with senior officials of the maritime ministry. The top of the fleet (the naval ministry and the maritime technical committee) was replenished, as a rule, from representatives of a narrow circle of noble families of nobles and had a bad attitude towards talented sailors who were able to advance.

In August, Makarov, 1865, was assigned to the Varyag corvette, the flagship of the squadron commander, Admiral I. A. Endogurov. The commander of the corvette was an experienced sailor, captain of the second rank, R. A. Lund. Until November 1866, Makarov was constantly in swimming, visited the Japanese, Chinese and Okhotsk seas, as well as in the Pacific and Indian oceans. In November 1866, Makarov was transferred to the flagship "Askold", which sailed under the flag of Rear Admiral Kern. But a month later he was sent to Kronstadt, in the Baltic Fleet.

Michman Makarov was appointed watch supervisor for the double-topped armored ship "Mermaid". While sailing near the Finnish coast, the Rusalka received a hole. For sealing holes on ships, a plaster made from a large piece of tarred canvas has long been used. A significant drawback was that the patch began to be made after the ship had received damage, thus losing valuable time. And Makarov developed detailed instructions for the manufacture of patches in advance, and also improved the design of the patch itself. The young inventor sought to ensure that any hole could not lead to the death of the vessel, and prepared the device drainage system, located between two bottoms. Makarov presented all his projects and ideas in detail in the first serious scientific work - “The Battleship“ Mermaid ”. A study of buoyancy and the means proposed to enhance it. ”

During the Russian-Turkish war 1877-1878. Stepan Makarov tested his new inventions in the mine business, for which he later received the nickname “the grandfather of the mine fleet”. He first brought the mine business to the system and in every way promoted mines as the most important weapon in a naval war. Makarov also conducted a study of the Bosphorus Strait, which resulted in the work "On the exchange of waters of the Black and Mediterranean Seas." Printed in the Notes of the Academy of Sciences, this study was awarded an Academy Award in 1885. The general conclusion was as follows: there are two currents in the Bosporus, the upper one - from the Black Sea to the Marmara Sea and the lower one - from the Sea of ​​Marmara to the Black Sea. The difference of these currents can be advantageously used in combat operations in the Bosphorus Gulf. Makarov's work is still considered classic and the most complete in addressing the issue of currents on the Bosporus.

In the summer of 1882, Makarov was appointed the flag officer of the head of the Baltic Sea navy ships detachment, Rear Admiral Schmidt. His work has increased. Makarov established a system of alignments and signs to mark the skerry fairway and took an active part in the transportation of large arms all types of weapons from the outskirts of St. Petersburg to various districts of the Finnish coast on military ships. In 1886, on the ship "Vityaz" Makarov went to circumnavigate the globe.

“Vityaz” followed the following route: Kronstadt, Kiel, Gothenburg, Portsmouth, Brest, El Ferrol (Spain), Lisbon, Madeira Island and Portopraise on the Cape Verde Islands. 20 November ship entered the harbor of Rio de Janeiro. Having safely passed the Strait of Magellan, the Vityaz 6 of January 1887 was in Valparaiso, and then crossed the Pacific Ocean in the direction of Yokohama. During the voyage, Makarov made hydrological and meteorological observations, measured the depths, and took water and soil samples.

In the autumn of 1891, a broad discussion began in the Russian fleet on the issues of armor protection of ships and increasing the penetrating power of projectiles. In the midst of this discussion, Stepan Osipovich Makarov was appointed Chief Inspector of Naval Artillery. He is actively engaged in technical improvements to the maritime service. So, at this time he developed a semaphore system. Signal transmission using flags significantly accelerated the exchange of information between ships. Makarov tried to introduce the latest innovation - radiograms, but did not receive approval from the authorities.
At the end of 1894, Makarov was appointed commander of the Russian squadron located in the Mediterranean. At this time, he was seized by the idea of ​​reaching the North Pole. Makarov persuaded Witte to find funds for the construction of the Yermak icebreaker, which was launched in 1899. However, during the test voyages, Yermak could not break through the ice, and Makarova was soon eliminated from this project.

In 1899, Makarov was appointed commander of the port of Kronstadt, the military governor-general. The situation in the Far East is gradually heating up due to the strengthening of Japan. As Makarov said to his biographer, Wrangel, about the situation in Port Arthur: “They will send me there when our things become absolutely bad.”

The admiral arrived at Port Arthur and led the Pacific Fleet in February 1904. From the first days he began to take action, coached the sailors, went out with a squadron into the sea in search of the enemy. Even the Japanese had heard about this talented man, they were afraid and respected by Makarov.

At the end of March 1904, the admiral received a report on the concentration of Japanese ships in the Elliott Islands area with a view to their further transfer to the Kwantung Peninsula. On the night of 30 on 31 in March old style, he decided to send a group of destroyers to intercept, and in the morning to withdraw the squadron from Port Arthur and destroy the enemy ships. The 8 destroyers went to the raid: "Brave", "Watchdog", "Silent", "Thistle", "Terrible", "Stormy", "Hardy" and "Fighting". In the dark, the destroyers "Terrible" and "Brave" behind the group and lost. The main detachment, saw in the distance numerous ships of the Japanese, turned to Port Arthur. The lagging ships stumbled upon the enemy: "The Terrible" was shot at point-blank and went to the bottom, and the "Brave" was able to return to Port Arthur. Makarov sent the Bayan cruiser to the aid of the “Terrible”, but it was too late.

Without waiting for the entire squadron to go out, Makarov on the battleship Petropavlovsk at 8 hours of the morning moved towards the enemy. Soon the main forces of the Japanese, 6 battleships and 2 cruisers appeared on the horizon. Petropavlovsk was at a very disadvantage far from the base, and Makarov turned to Port Arthur. In 9 hours 43 minutes, the battleship came across a mine can, and an explosion rang out over the sea.

Together with the headquarters of the fleet commander, there were 705 people on Petropavlovsk, of whom 636 died and died from wounds. Among them was the Russian artist Vereshchagin. For some reason, the Japanese commander-in-chief, H. Togo, did not develop success, and after a few hours the enemy’s squadron departed from Port Arthur.

The Russian fleet suffered a huge loss, having lost the commander in chief. The morale of the sailors plummeted, and faith in the victory, which Makarov managed to convince, was greatly shaken. Subsequent admirals did not show such zeal in the fighting, and no one treated ordinary sailors as well as Makarov. The outcome of the war was obvious. “Only he wins who is not afraid to die,” said Admiral Makarov.