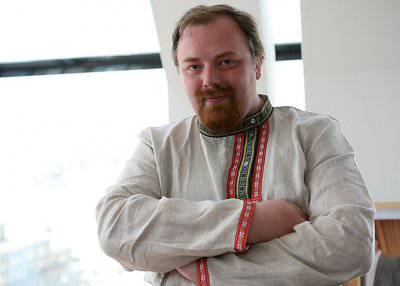 In the South-East of Ukraine, Russia faces three tasks: the reunification of Sevastopol and the Crimea, support for the peaceful uprising of the Russian population, and anti-terrorism measures to prevent Ukraine from turning into a terrorist base.


1. Every nation has the right to reunion within one state. There is no way to prevent this reunion except through violence.

2. Russians are the largest disunited people of the earth. This happened as a result of irresponsibility in the liquidation of the USSR, which was dissolved along inter-republican “Belovezhskaya” borders.

3. The Bialowieza borders are unfair and cannot be recognized by reason or conscience. Their legal recognition is a crime against the Russian people, as well as other peoples destined to be in conflict with the Russians for the sake of these borders.

5. The most reasonable thing for the peoples who have included Russian territories along the Belovezhskaya borders is to voluntarily abandon them, to make a territorial demarcation between themselves and Russia.

6. The absolute majority of the Russian people did not claim and do not claim to the territories inhabited by other nations.

8. The illegitimate regime in Kiev cannot and should not be viewed by Russia as a subject of domestic and foreign policy, as a representative of sovereignty and a defender of Ukraine’s territorial integrity. As a political subject for Russia, it simply should not exist.

9. The presence or absence of ultra-right nationalist armed elements in the ranks of a coup does not matter. A coup would remain a coup, and a rebellion would be a rebellion, even if it were absolutely politically correct in terms of the composition of the participants.

10. The participation of radical groups is important for the situation from the other side that these are terrorist groups that had supported the terrorist war against Russia in the Caucasus in 90 and are still appealing for support to international terrorists. This creates for Russia the need for antiterrorist measures to eliminate the influence of the “Right Sector” and similar groups on the situation in Ukraine.

11. Terrorist groups create the danger of terrorist attacks against the Russian population not only in Sevastopol, the Crimea and in the South-East of Ukraine, but also in Russia itself, if they are allowed to consolidate.

12. In this regard, Russia faces three tasks:

a) the reunification of the unfairly severed lands of Sevastopol and Crimea,

b) support for the peaceful uprising of the Russian population of the South-East of Ukraine and its self-determination,

c) anti-terrorism measures in the rest of the territory of Ukraine in order to prevent it from becoming a terrorist base.

13. In Ukraine, the zone of ethnic division between Russians and Ukrainians was designated, it is obvious both for the residents of Ukraine and for external observers.

16. The assumption of the implementation by Ukraine of sovereign functions on the territory of Sevastopol was a crime of the political regime of the Russian Federation, established in 1990-s, and the inertia of this crime must be eliminated.

17. The Republic of Crimea should hold a referendum in which it could choose between independence when associating with Russia and directly joining the Russian Federation as an autonomous republic. In the case of an association, the two states should have common border guards and customs.

18. The reason for holding a referendum in Crimea is only the fact of its formal belonging to the state of Ukraine according to the norms of international law. At the same time, the “Kosovo precedent” showed us that the opinion of the Ukrainian authorities cannot bind the Crimea if it is self-determined.

19. Russian troops are in Sevastopol on the grounds that this is the territory of Russia, as stated in paragraphs. 14-15.

20. The right of the Russian army to be in the Crimea is not disputed and cannot be contested. To call it “intervention” is incorrect. This is the protection of citizens and military facilities in the framework of a humanitarian operation and the provision of conditions for future free will.

21. The self-determination of citizens of the South and East of Ukraine is in their own hands. They can seek to expand the status of their lands within Ukraine or form an independent state with the support of Russia.

22. The use of Russian flags at demonstrations in the South and East during the “Russian Spring” is explained by the fact that this is not only the Russian state flag, but also the Russian national flag used since the 17th century. This does not indicate the annexationist plans of Russia.

23. The reunification of the South and East of Ukraine with Russia into a single state is desirable in the long term for the formation of the state of all Russians, however, it cannot be forced by international conditions.

24. Regions with a predominantly Russian-speaking population who wish to preserve themselves as part of Ukraine should be guaranteed the right to use the Russian language, the electing of all branches of government, and eliminate the threat of economic and political pressure on them from any government in Kiev.

26. “The Armed Forces of Ukraine”, using force against civilians on the orders of an illegitimate regime, should be considered as illegal armed groups. Their members must be disarmed.

27. The task of the Russian troops on the territory of the South and East of Ukraine is to prevent a humanitarian catastrophe, to protect citizens from the threat of terror from the west and from police measures of an illegitimate regime in Kiev, to protect their right to free will, to hold regional referendums, etc. The use of Russian troops with these functions is absolutely justified.

28. Of course, Russian troops have the right to conduct operations and control the territories necessary to ensure the Crimea, up to the normalization of the situation.

29. After ensuring the security of the illegally seized territories and the Russian population of Ukraine, Russia must present an ultimatum to all the political forces of Ukraine demanding to limit the actions of terrorist groups and liquidate their bases.

30. Necessary antiterrorist operations should be carried out, including ensuring the safety of nuclear power plants, the detention of persons involved in terrorist actions against Russia.

31. At the same time, Russian forces should not be used to influence political processes in the rest of Ukraine. In no case should the Russian army occupy Kiev.

32. The policy of gradual “Finlandization” of the rest of Ukraine is optimal - that is, creating political and economic conditions for the development of stable statehood in this country, which is not hostile to Russia.

33. Russia should promote the entry of Ukraine into the EU after its control over the territories where Russians do not want to submit to the authorities of Ukraine live is excluded.

34. Russia should initiate an international treaty on the indefinite non-aligned status of Ukraine.

35. You should not go on an artificial confrontation with the United States, the EU, NATO countries. On the contrary, it is necessary to promote the least conflict resolution of the crisis.

The Russian leadership has an actual carte blanche for any diplomatic agreements and concessions, except for those that go to the detriment of Ukraine’s Ukraine and prevent the return of the torn-off territories. At the same time, no fear of economic and foreign policy sanctions of the West is allowed.

36. It is expedient for Russia to attract the support of China, including, pointing out the similarity of the Crimean and Taiwan issues.

37. It is advisable for Russia to ensure all the legitimate interests of Turkey, which are not to the detriment of the Russian population of Crimea and Ukraine, and to ensure the military neutrality and diplomatic loyalty of this state.

38. The anti-Russian stance of some individuals and organizations, expressed in connection with the Ukrainian crisis, is politically irrational, value irresponsible, and can only be explained by the desire to exert political pressure on the Russian leadership and force it to retreat before Western countries begin to apply sanctions to the assets of Russian officials and politicians abroad. These politicians, journalists and organizations protect their business and the business of their sponsors. Nothing more.

39. Persons taking an anti-Russian stance in the conditions of external conflict within Russia, participating in the information war on the side of the enemy, should be restricted in freedom of expression and action until the end of the acute phase of the conflict. There is no more reason to respect their freedom of speech and action now than there was in London in 1940 the year to respect the freedoms of British fascists.

Ctrl Enter
Noticed oshЫbku Highlight text and press. Ctrl + Enter
We are
Igor Shishkin: Algorithm for the reunification of the Russian nation: reunification as a response to the challenge of disintegrationTom Christiansen: "The Russians are destroying us; they are robbing us of means of food": Russian-Norwegian relations in the Far North until 1820
Military Reviewin Yandex News
Military Reviewin Google News
158 comments
Information
Dear reader, to leave comments on the publication, you must sign in.