Crimean breakthrough - will he save us from the umbilical hernia that has beaten us? 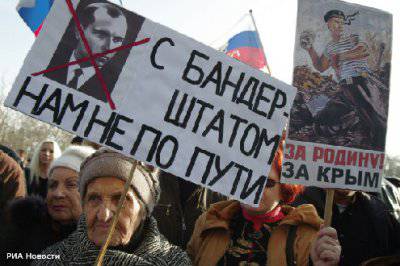 The Soviet Union’s ascent began with the first mass strike in the Donbass in 1989, when the dirty people, who crawled out of the mines, like ants, felt for the first time as a mighty force. Hundreds of miners in robes launched into the reserved hall of the Donetsk regional committee, where the negotiations with them were conducted by the pre-USSR committee Shcherbakov. Led very sensibly, managing to convince the negotiators that their countless claims were impossible to fulfill - but the square that had bitten the bit had not wanted to listen to any reason.


This force then kicked out such an umbilical hernia of individualism, generated by the previous bend in the social direction. And let's all madly tear the public blanket everyone over.

One of the mining leaders took a telegram from the metallurgists on the square: “We support your strike and are ready to go on strike too!” Thousands of sips began to shout: “Yes! Let them strike too! ”But another leader came out:“ If they strike, then they will have to give something, but they will not be enough for everyone. Therefore, we’ll better answer: thanks for the support - and let them not go on strike! ”And all:“ Yes! Let them not strike! ”

Bickford's cord of self-interest flared across the country. For the same results, to the detriment of others, the Kuzbass went on strike, then these others — and this personal umbilicality tore the umbilical cord of the whole country. The Ukrainians went insane: “Let us separate from the Russians - and we will eat our own fat and pampushkas ourselves!” But in the end they seized the fierce poverty that drove them into slavery to the Muscovites. They put a barrier on us - and it turned out that they themselves had driven themselves into a cage, through whose rods they dragged us not only their own fat, but also everything that could be sold with humiliation. The brutal Moscow panel was filled with unhappy khokhlushkami, selling their ill-tempered beauty for their bad independence.

Then insight began to come little by little - and its center, as if to atone for a past mistake, arose in the same Ukraine, from which this umbilical gangrene began. Having risen against 2006 in the year against the NATO exercises in the Crimea, the Crimeans no longer revolted for their pampushkas, but for our single-rooted Homeland: “We are not NATO, we are Slavs! Our brothers are Russians! ”

It did happen that you need to protect the entire anthill from the termites who attacked it - and not just a personal blade! Since the rupture of the trail, which connected our vacationers with the Crimeans living at the expense of their rest, is inevitably fraught with the personal collapse of everyone. And we have nothing to blush for now helping the Crimea to preserve this path for centuries from dissenters. NATO members Crimea resorts with its peaches are not needed!

And here you can even say thanks to the Kiev Maidan, who, throwing off Yanukovich and revealing the old boil, betrayed such Crimean leaders as Chaly and Aksenov. What they conquered all? By the fact that they have turned from hypocritical undercover diplomacy to the direct word and deed, according to which they have yearned in Crimea and in Russia. They said - they did it: they received the “Golden Eagle” fighters in Kiev, declared a referendum for their independence, reassigned the siloviki to themselves.

An audacious act, a step with taking all the responsibility upon oneself — this is what the slippery Russian leaders, who have lost all the respect of the people, are so lacking in. Only the madness of the brave leads to victory, and the cowardly waggle that has hardened Russian politics leads to the inevitable, ultimately defeat. And our politicians, having felt that they can easily repeat the fate of the despicable of the whole world for his waggings, Yanukovych, lined up together for the newborn Crimean. Already Matvienko, after the Federation Council issued an agreement to bring our troops into Ukraine, it rose to such an unprecedented audacious joke: “How can NATO enter there? We did not consent to this! ”

But with all this, I can not get rid of the question: what will happen in the Crimea later, if we win there now? Now our support to the Crimea is very similar to the situation of 10-year-old in Abkhazia. Its no less worthy leader, Ardzinba, also said: “Our resorts and NATO mandarins are not needed! Therefore, we will strive for Russia anyway. ” In the year 2002, just as it is planned now in Crimea, according to a simplified scheme, Russian citizenship was issued to all Abkhaz residents. “Abkhazians and Russians are brothers forever! Long live Russia! ”- the whole of Abkhazia rejoiced in one burst.

A plan for its restoration was drawn up, the president loyal to Russia and the Russian vice-premier were determined, who, under a direct report to the Russian Federation, would overhaul the acquired territory ... But this music played for a short time there. Soon everything was turned inside out by the hands of our rotten bureaucrats, who, as I understand, received a prescription from the civilian State Department. With the help of then-Deputy Prosecutor General Kolesnikov of the Russian Federation, they forcibly broke the election of the RA President in 2004, which was won by the pro-Russian Khajimba. Instead, they dragged Bagapsh, who was behind the criminal authority of Besik Jonua, who was soon killed, and Ankvab, who is now ruling, behind the ears of an unfriendly us. All this caused at first the amazement of the Abkhaz - and then the contempt for the nurse-Moscow, one hand of which does not know what the other is doing.

One of our bureaucrats then bragged proudly: “And they didn’t throw up such things!” And Abkhazia eventually turned into a thieves' ethnocracy, from where Russians are already being driven into the neck, where their diaspora has been halved since the 2002 year. In this kingdom of kickbacks and theft, local princes healed in embrace with our embezzlers, jointly using the black hole they created, into which all Russian infusions go.

The Abkhaz breakthrough in 2002 raised our authority in the Caucasus to the point that even the hostile Georgians rushed to Sukhum: and we want to go to Russia! But the West did not tolerate this - and with the help of our officials, they corrected this political omission. Putin, who gave the go-ahead for the operation in Abkhazia, followed in his stronghold, without saying a word - and why, this is his secret sealed.

So, what will happen to the Crimea if our current operation there is even successful? Will he become a new platform for the plundering of our treasury, a hotbed of criminals carrying out attacks in Russia, and another parasite on its neck? How to make sure that our huge and contagious bureaucratic octopus did not strangle him in his arms, which “did not fill up such things”?

The main brake on Russian politics is the holdings of its guides hidden in the West, for which they can always be held and turned in any direction. The thief is not so terrible as the fact that he is sitting on a strange hook and because of this he becomes a traitor. Even before the Crimean operation, Putin ordered all the officials to get rid of foreign deposits, and in this connection she inspires me with a slight optimism. The answer to it will obviously be the freezing of those deposits in the state-owned banks - that’s their owners will vzvot and will continue to hide the stolen goods stolen under someone else’s mattress! And if this measure, to which Putin decided, without fearing the reciprocal hatred of his camarilla, will work, the Crimean breakthrough may be more successful than the Abkhazian one.

But we still do not have our own civil antidote against the bureaucratic mob. And maybe, our sleeping masses will somehow be helped in this regard by the Crimea, which has risen from civil hibernation, with its leaders all-in-bank, who have already caused our great sympathy.

If only they, by their labor example of winegrowers and resort industry workers, awakened in us, vacationers, and the conscience that sleeps on the pillow of our undeserved well-being!

Yanukovych didn’t wake up, and he didn’t go for nothing: they say I give my family bowl to Ridna Ukraine and return to the holy court of the people where my mother gave birth! That would be so do entered into the legend - not a winner, so an innocent martyr! We all curse him for it - but who among our own would have made such a feat?

We are all too strangled by this umbilical hernia - and at least we understand, including the current Crimean example, that we must somehow get rid of it, every time we postpone it for later. And then maybe we will do without it. And this hernia slowly but surely extinguishes us, bends in the arc subordinate to bad officials.

Putin, with his daring antics to threaten our troops to defend the heroic Crimeans, gave the nation a chance to straighten its shoulders proudly, not without the inevitable risk. And then the matter, anyway, is ours. It was committed to puffing against the once embittered leader - or to go beyond the critical stereotype, defeating his fear of the West and our bureaucrats tied to it.

In the Abkhaz case, they, with their crumbs buried in the West, turned out to be the enemies of Russia even worse than Georgia. But there is a chance on the basis of the Crimean breakthrough, which, by virtue of all that has been said, can also be a blow to the traitors, at first it is morally at least take over the vital upper hand.