What sang tabla and dole 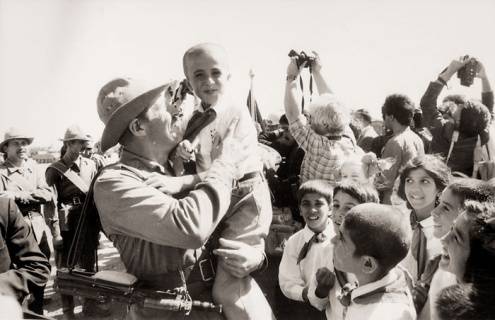 Soviet "shuravi" not only fought with the dushmans, but also tried to help the Afghans in building a peaceful and happy life

- Want to visit the Pakistani border? - Late in the evening, our special propaganda adviser named Oleg asked me on the phone.

- And you still ask, Comrade Colonel! - I involuntarily burst out of me instead of a short “yes” or statutory “so precisely.”

- Then tomorrow at 7.00 be ready for departure.

To wave to the Afghan-Pakistani border during the war is easy to say. Don't just get there. The only real way is from Kabul by air to Jalalabad, the center of the frontier province of Nangarhar, and then on the “armor” towards Pakistan, from where main flows weapons, people, financial and material means. And here he is, a rare chance for a business trip from Moscow to get to the border.

FLIGHT IN THE NOAH ARK

“I remember morning Kabul, / Everything is unusual in the blue capital: / And the gloom of the mountains, and the harsh voice of the bird, / And the streets of the waking up hum ...” To the sounds of this “Afghan” song that sounded quietly from the radio tape recorder, the Afghan Air Force early February morning, 12, took a course from the Kabul airfield to Jalalabad. The car was piloted by the crew commander, Lieutenant Colonel Ghulam Mohammed. He then pressed her to the ground, then forced her to soar sharply over the mountain spurs - they fired from the bottom. Such pirouettes in the air, frankly, are not for a transport plane, but ... It is good that the cargo that was carried to Jalalabad was securely fixed.

The cargo cabin of the An-12 resembled Noah's Ark. Who and what was just not there! In addition to boxes of ammunition, food and medicine - bales with uniforms and civilian clothes, bundles of brochures and leaflets in the languages ​​of Dari and Pashto. And people are like in a barrel of herring: on the seats at the sides, on the floor along the entire cargo compartment close to each other are our and Afghan soldiers and officers, some silent frowned bearded men in wide homespun pants and Afghan hats, a Soviet woman doctor Hospital in Kabul.

Standing alone on the folding seat, looking over the heads of the passengers, sat a mullah named Mustafa. He was not an ordinary minister of the Almighty, but a representative of the Council of Ulema (religious leaders) of Afghanistan, an expert and interpreter of the Koran.

At a meeting in the provincial NDPA committee in Jalalabad, the route of the joint Soviet-Afghan campaign team to the border areas where shinwari live is planned. This is a poor, but proud and freedom-loving tribe of highlanders. The poor are not only because they live in Afghanistan very poorly. In the mountainous forestless areas, unlike the subtropics of Jalalabad, it is not easy to survive, especially in harsh winters.

Where there is water, there is life, where there is smoke, there is wealth, they say shinvari. And indeed it is. For firewood in Afghanistan is very expensive. Each dry branch is collected, folded and donkeys are taken home and for sale.

In Kabul, I had met Shinwari before. Amazingly beautiful people. Article, and manners, resemble royal persons. All have regular facial features, big black eyes, slightly wavy long hair. And you listen to their conversation - as if a throne speech is being uttered: in every word dignity and degree. Most of them at that time supported the central Kabul power, for which they were subjected to fierce attacks by the Mujahideen. It was supported because from Kabul to the villages of the shinwari for the first time for their history they sent teachers, doctors, medicine, children first began to study in built schools.

LIFE ON THE BORDER

And after an exhausting, many-kilometer march along dusty roads, our convoy is at its next destination — the village of Ochin (Shinvar district, Shergar county). The name of the district itself speaks of the people inhabiting it - shinvari. We are met by the county chief Vakil, a tall, stately man of middle age with a beard, like a Russian merchant, with a large one. On the face the color of copper deep furrows from the winds, frost and sun.

Wakil and his companions — Captain Ashraf, head of the local Tsarandoya (department of the Ministry of Internal Affairs), and Lieutenant Ayatullah, head of the Hud (security services), introduce us to the situation. Earlier, before the attacks of the Mujahideen, 55 thousand inhabitants lived in the district, and during our arrival about 30 thousand lived. Many died, others were forced to leave these places. Although at that time, and even now, in Afghanistan, quieter places are a relative concept.

But four months earlier, a self-defense detachment (120 man) created in the county cleared the area of ​​armed groups. They were forced to cross the border into Pakistan. The inhabitants of Ochina themselves built a school, 120 children studied there (there are only 5% literate in the village). Local authorities helped those families where they were killed in clashes with the Mujahideen. Therefore, the humanitarian assistance that our squad brought was very opportune. In connection with this, Vakil shakes his head approvingly: Shinwari are proud people, but they do not refuse help.

From Ochin to the Pakistani border - nothing at all: 15 km. Or, by the standards of hardy Shinwari, less than two hours of walking along mountain paths. Gangs from abroad raided constantly. Pakistani border units even participated in the attack once. And in the ranks of the Mujahideen, according to Captain Ashraf and Lieutenant Ayatullah, advisers from Saudi Arabia. Locals saw how during the dushmansky attacks their "exploits" were captured on tape by the Americans, the French and the West Germans.

And then Mr. Wakil invited us to the battalion of Afghan border guards from the 1 frontier brigade stationed in the district (there were six battalions in all then). We were met by the battalion commander, senior captain Amirdzhon. He is only six months in office, and his biography fits in a few lines: from a family of dehkans, graduated from high school 12 classes, and then courses for border guard officers. But Amirjon’s combat experience doesn’t take place: it’s only in clashes with the Mujahideen: either you or them. He was given the next military rank ahead of time.

On the day of our arrival, the 120 fighters of the border battalion were performing a combat mission. And on the eve of the border guards with military honors buried their comrade - Private Abdulwali. He was only 20 years old. Abdulvali’s son Mamadwali was born in Surubi district of Nangarhar province. The post, which he guarded, was attacked by the Mujahideen. The border guard took an unequal battle and fired to the last ...

FRIENDSHIP IS CHECKED BY TIME

Senior captain Amirdzhon ushered us into the courtyard of the headquarters, surrounded by a high adobe fence. Here we saw an unusual weapon for border guards - an anti-aircraft gun. In appearance the Soviet, and the inscriptions in Chinese. Two months ago, the border guards together with the fighters of the guard were smashing a gang of rebels and seizing this installation along with the ammunition. In a conversation with the battalion commander, senior captain Amirdzhon, his deputy for political affairs, captain Said Amir, other officers, I was struck then: it turned out that they know the history and military traditions of the Soviet border guards well.

Local residents and free from the service border guards gathered in the center of the village of Ochin, where the vehicles of the united propaganda team were located. The doctor Irina Lesnyanskaya, who arrived with us from Kabul, examined the children, women and the elderly, immediately provided medical assistance on the spot. Our officers distributed food, clothing, books, and brochures to the local school. And most importantly, priceless kerosene in these parts. Mulla Mustafa read surahs from the Qur'an and commented on them, relating them to current events. As it turned out, he is a local, from the Shinwari tribe. Although I lived most of my life in Kabul, I did not lose ties with my fellow countrymen.

- We brought you the help that was sent by the government and the Russians. Are those who call themselves defenders of Islam capable of such things and kill the faithful at the same time?

And then I thought: did the venerable old man Mustafa risk making such statements? After all, there was a war.

“We, the Shinwari, want the world to finally come to our land.” We were not the first to take up arms.

And then over the square came the sounds of music. He played a small orchestra of national instruments, in which tabla and dol were the soloists. (Some Central Asian peoples also have such instruments in the former USSR.) Nimathullah, who came with us from Kabul, sang about how Afghans dream of a long-awaited peace in their ancient land. But for some reason, the musical loss of the tabla and the share of the share of the Afghans seemed to me then sad.

Today, the “Afghan” period of our history is assessed differently. I remember the Land of the mountains and its people as I saw them then, in the already distant 86. What I made notes in my Afghan notebook, which I reread now, a quarter of a century after the withdrawal of our troops. From the people who visited Afghanistan already in our days, I heard: among those who fought against the “shuravi”, there are quite a few who speak respectfully about us. Strange as it may seem, they consider that period more stable than the times that came later.

Question: Does tabla and dale sound today in the Country of Mountains tormented by civil strife? For me, he still remains unanswered. But the songs of hope performed by Nigmatulla, which I first heard in the land of the proud Shinwari tribe near the Pakistani border, still sound in my memory.

Ctrl Enter
Noticed oshЫbku Highlight text and press. Ctrl + Enter
We are
Rivers of blood on the land of Bengalis. How one of the most populated states of the world fought for independenceTactics of the Afghan insurgents
Military Reviewin Yandex News
Military Reviewin Google News
5 comments
Information
Dear reader, to leave comments on the publication, you must sign in.